Argentina’s Abortion Vote Was a Stepping Stone Not a Setback

Late Wednesday night, Argentina’s Senate voted against legalizing abortion during the first 14 weeks of pregnancy. After a marathon 16-hour debate, senators decided to reject a law that would have saved countless lives. For now, people who need to terminate pregnancies in Argentina will have to continue to risk death or incarceration.

But something has irrevocably changed.

That night, hundreds of thousands of people, mostly women, stood together in the streets outside the Senate in Buenos Aires. We stood there for hours in the rain, wearing the emerald green handkerchiefs that have become the symbol of the pro-choice movements that are sweeping Latin America. We knew that the majority of Senators were planning to vote against the law, and that as the night wore on our chances of winning were slim. Still we stood there in the cold, with rain and green paint running down our faces.

That mass gathering was momentous. It showed that the stigma, shame and secrecy that have surrounded abortion for so long are disintegrating.

Now, with the legislation blocked, Argentina is stuck with a 1921 law that only allows abortion in cases of rape or when the life or health of the woman is in danger. People who have to terminate their pregnancies for other reasons must do so in secret and in unsafe conditions.

Despite this setback, change is inevitable. In today’s Argentina, women can stand proudly together and demand the freedom to make decisions about their bodies.

“Now that we are together, now they see us,” women and girls sing in the streets, because they finally feel empowered to express themselves and claim their rights. Now that this topic has been loudly debated in Congress, it can no longer be kept quiet.

Much of the change in attitudes has come from a younger generation of women. On the streets, in schools, on buses and in nightclubs, the green wave is unstoppable.

In recent weeks, Argentina’s mainstream media has even been publishing articles explaining young people’s inclusive new language. Instead of using the female pronoun “la” or the male “el”, many are now using the gender neutral “les.”

Young women have worked quickly and passionately to push reproductive rights to the top of the political agenda, opening up conversations about sexual harassment and gender-based violence at the same time.

The women and girls standing up today are able to do so thanks to previous generations of feminists who have been fighting for women’s rights for years. Ask Nelly Minyersky, a tireless activist and still an iconic leader at 89 years old. The Senate will not stop her or this movement by blocking a reform.

Our momentum is unstoppable. The National Campaign for the Right to Legal, Safe and Free Abortion, a broad coalition of feminist groups, civil society organizations and sympathisers, started in 2005 and has since presented seven bills to legalize abortion. Hundreds of thousands of people took part in two massive vigils during the recent votes in both chambers of Congress, with the lower house approving the bill in June. And the movement has put previously taboo topics, such as sex education in schools and access to contraceptives, on the national agenda. Shortly after the abortion law was rejected, President Mauricio Macri said that his government was working on improving policies around reproduction and family planning.

This is historic. We have made our voices heard.

And we did this in the face of powerful opposition. Last month, Pope Francis, who retains significant influence in his home country, compared abortion to eugenics carried out in Nazi concentration camps. Senators publicly denounced pressures by the Church and as they were debating the bill, the Catholic Church in Buenos Aires held a “mass for life.”

The women in green know that legalizing abortion is actually about protecting lives, about stopping all those preventable deaths that result from anti-abortion laws. They know that opposition to abortion is often about policing women’s bodies and ensuring that they enjoy fewer freedoms than men. ( While female senators were evenly split on the vote, with 14 women opposing the bill and 14 in favor, the majority of male senators voted against it.)

Above all, these young activists understand that this was not a vote on whether there should be abortions in Argentina. Abortions will always happen, regardless of the law. This was a vote on whether these abortions should continue to be life-threatening, or whether they should be carried out safely and legally. Sadly, most senators chose to continue criminalizing women who have abortions—despite the risk of more deaths and injuries. But what they cannot do is take us back to the era of secrecy.

Human rights change happens gradually. Many women stood outside the Senate on Wednesday night and gave statements of resilience and hope, despite how crushed they felt. A group of students at the rally held megaphones and chanted: “Beware, beware, beware machistas, all Latin America will be feminist.” These are the people who will be voting and setting the agenda for years to come.

We may have lost the vote, but everybody who campaigned for this change in Argentina should feel proud of how far they have brought us. They have rallied in their millions to support women’s rights.

The bill cannot be debated again until Argentina’s next legislative period, which begins next March, but in the meantime, similar movements are surging across Latin America. People in Mexico, Ecuador, Chile, Colombia and Peru have already prepared their own handkerchiefs to campaign for access to legal abortion in their countries. The solidarity movement in Europe has also been immense.

Despite Argentina’s senators closing a door to women’s rights here, this movement has opened a huge window to the entire continent and beyond. Now they see us all over the world. It won’t be long until we win. 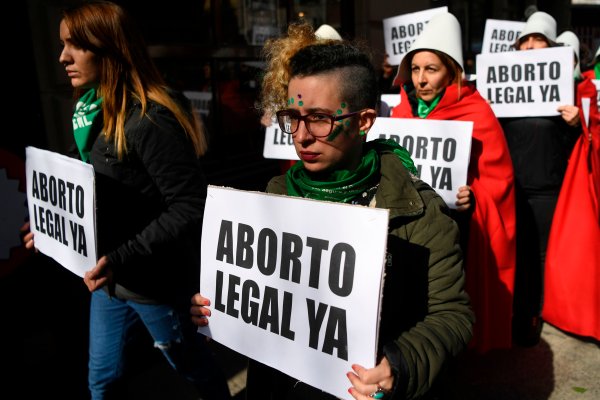