The Trump Administration outlined a plan to make a “Space Force” the sixth branch of the U.S. military Thursday, but there are still significant hurdles before it could become a reality.

In a speech at the Pentagon, Vice President Mike Pence gave the most concrete outline to date of the new branch, noting that it would be created by re-structuring already existing space operations and employees. The Administration’s goal is to establish that branch by 2020.

“Now the time has come to write the next great chapter in the history of our armed forces, to prepare for the next battlefield where America’s best and bravest will be called to deter and defeat a new generation of threats to our people and to our nation,” he said. “The time has come to establish the United States Space Force.”

The Space Force, however, would still need Congressional approval before any of these plans are set into motion. This would be the first new branch since the Air Force was established in 1947 after World War II. The White House is advocating for Congress to invest an additional $8 billion in space security systems over the next five years.

Pence also announced their intent to set up a new combatant command. The U.S. Space Command would be the 11th combatant command under the Department of Defense. Its creation reflects a strategic military shift to emphasize the defense of U.S. satellite systems that provide the navigation, communication and Earth-observation functions that Americans employ every day.

The Pentagon report said that the military should be “prepared to deploy teams of space experts to the U.S. European Command and U.S. Indo-Pacific Command no later than summer of 2019.”

The initiative will also include the creation of the Space Development Agency, which will help to establish these organizations and a Space Operations Force, which will assemble space “warfighters” and personnel.

In his speech, Pence highlighted aggressive maneuvers in space by countries such as Russia and China. He described their endeavors to develop weapons and technology that put U.S. based space assets at risk. He also argued that the U.S. military must match that activity to defend American interests in space.

“As their actions make clear, our adversaries have transformed space into a warfighting domain already. And the United States will not shrink from this challenge,” he said.

He added, “America will always seek peace in space as on the Earth. But history proves that peace only comes through strength. And in the realm of outer space, the United States Space Force will be that strength in the years ahead.”

A 15-page Pentagon report released shortly after Pence spoke explained that the Department of Defense would “usher in a new age of space technology” and “deter, and if necessary degrade, deny, disrupt, destroy, and manipulate adversary capabilities to protect U.S. interests, assets, and way of life.”

The U.S. military is not new to the space game. It has been involved since the dawn of the space age more than half a century ago. The Pentagon currently has more than 100 satellites in total, including 31 GPS satellites that much of the world depends on. Most of the satellites are operated by the Air Force, which is likely to see a decrease in responsibilities after the proposed reorganization.

Congress representatives Mike Rogers (R-AL) and Jim Cooper (D-TN), respectively Chairman and Ranking Member of the House Armed Services Subcommittee on Strategic Forces, said in a joint statement, “We have been warning for years of the need to protect our space assets and to develop more capable space systems. We are glad that the Pentagon is finally taking these steps in enhancing our space strength.”

The idea of a Space Force had been raised previously, but ran into stiff opposition from Pentagon brass. Last year, Defense Secretary James Mattis argued against the creation of what was then called a “Space Corps” because of budget concerns and undesirable bureaucracy. “I opposed the creation of a new military service and additional organizational layers at a time when we are focused on reducing overhead and integrating joint warfighting functions,” he wrote in a letter to Republican Sen. John McCain, chairman of the Senate Armed Services Committee.

On Thursday, Mattis appeared alongside Pence at his speech to back the formation of the Space Force as a military branch.

President Trump first called for a space defense operation in May. At an event for Marines, Trump said “I was saying it the other day — ‘cause we’re doing a tremendous amount of work in space — I said, maybe we need a new force. We’ll call it the space force,” he said. “And I was not really serious. And then I said, what a great idea. Maybe we’ll have to do that. That could happen. That could be the big, breaking story.”

In June, Trump called again for a “separate but equal” space force. “When it comes to defending America, it is not enough to merely have an American presence in space,” he said. “We must have American dominance in space.”

– With reporting from W.J. Hennigan 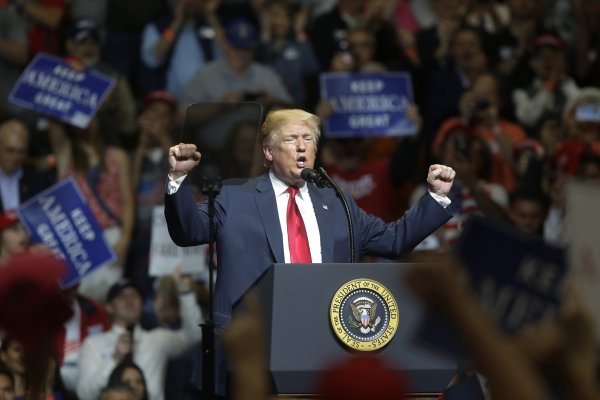 New Musical About the White House Has Nods to Donald Trump
Next Up: Editor's Pick