The First Academy Awards Had Two Best Picture Categories, Too

A view of Oscar statuettes backstage during the 89th Annual Academy Awards at Hollywood & Highland Center on Feb. 26, 2017, in Los Angeles, California.
Christopher Polk—Getty Images
By Olivia B. Waxman

On Wednesday, the Academy of Motion Picture Arts & Sciences announced a slate of new changes to the format of the Academy Awards, but the addition of a cryptically defined new category for “Outstanding Achievement in Popular Film” has sparked the most buzz — much of it negative.

“The Most Popular Award, or whatever the Academy decides to call it, seems to be part of a desperate measure to get butts in front of the television on Oscar night,” wrote TIME film critic Stephanie Zacharek, noting that the ceremony’s viewership reached an all-time low in 2018.

Debating whether Best Picture nominees are worthy of the honor is as old as the Oscars itself, but it’s worth noting that — while backlash was the dominant reaction to the announcement — this won’t be the first time that the Academy Awards has had two Best Picture categories. In fact, that practice started and ended with the first-ever Academy Awards, which honored movies made between Aug. 1, 1927, and Aug. 1, 1928.

Wings is a drama set World War I, in which combat pilots played by Charles “Buddy” Rogers and Richard Arlen compete to win the heart of Clara Bow. Some have called it the Titanic of its day. TIME called the movie “conventional but reliable stuff” — but it served an important role outside theaters too. The innovative flying sequences, which earned an effects Oscar, came thanks to the military, which “cooperated generously with Paramount in making this picture drama of the skies.” At the time, the Academy, which was established in 1927, was on a mission to show that Hollywood could be wholesome and patriotic.

According to Debra Ann Pawlak, author of Bringing Up Oscar: The Story of the Men and Women Who Founded the Academy, temperance advocates seized on a triple whammy of film-industry scandals to reinforce their case for Prohibition in the 1920s: silent film star Wallace Reid dying from a morphine overdose, the (still unsolved) murder of director William Desmond Taylor, and the accusations that comedy star Fatty Arbuckle murdered a young actress. (Arbuckle was later acquitted.) The temperance advocates’ campaign to equate Hollywood with sin was so effective that industry leaders “felt they were at a crossroads,” Pawlak says. The introduction of the Academy and its awards was part of that moment.

“They had to clean up their image or possibly everything they worked for was going to go down the tubes,” she says. “The awards were a way to show there are talented, smart people in Hollywood and get across to the public the good stuff they were doing.” Acknowledging a patriotic love story like Wings helped convey a more wholesome image.

F.W. Murnau’s dark romance Sunrise didn’t quite fit that same mold. TIME described it as a “meagre story of a clod of a farmer who almost drowned his wife before realizing that he loved her.” Critics today, however, have tended to side with the Academy on this one; many have called it a masterpiece. It was, in other words, “unique and artistic” — the kind of thing that might be described as Oscar bait today.

But by the time the second Oscars ceremony rolled around, the “Unique and Artistic Picture” category was gone. The number of categories had shrunk dramatically (the award for title-card writing was gone too, for example) and one of the casualties was the distinction between the two top prizes.

The change came most likely because “the distinction between ‘artistic’ and the more general definition of ‘best’ film was so arbitrary,” Monica Roxanne Sandler, who has studied politics at the early Oscars, told TIME in an email.

The Academy’s addition and subtraction of categories has always been influenced by what’s going on in history, Sandler explains. Best supporting actor, she says, was an attempt to draw more talent to the event in 1936 after the Hollywood unions had boycotted the awards. The documentary categories were introduced in the early 1940s as a way to acknowledge Hollywood’s support of World War II, and the foreign-language category was originally meant to honor not cinematic quality but “international reunification,” in Sandler’s words, in the post-war period. “I would argue that the Documentary, Foreign Film, and additionally Animated feature categories already serve a similar function to the proposed ‘popular film’ trophy,” Sandler tells TIME, “in that they create a space for a very specific type of film to have a presence at the ceremony, but at the same time have frequently limited the ability for these films to gain a nomination for Best Picture.”

And, long before this week’s announcement, critics have been debating whether the Best Picture category accurately reflects films enjoyed by the Academy voters versus the general public.

In 2009, the Academy announced an increase in the number of films that could be nominated to ten — more than the six that were nominated across both Best Picture categories when there were two — prompting the late TIME film critic Richard Corliss to argue that the shift would “allow a wider variety of movies in a category that has, over the past decade or so, been hijacked by ‘worthy,’ mostly unpopular films that don’t come close to representing the technical and storytelling savvy that modern Hollywood artisans are so very good at.”

After the 2015 ceremony, Corliss even made the case for two Best Picture categories, just as the Academy announced this week. Noting that American Sniper was the only blockbuster within the eight nominees for Best Picture, he mused about the divide between “Hollywood, which makes movies the whole world watches” and “off-Hollywood, which hatches the films that get the Oscars.” He suggested a solution: “Maybe the Academy, obsessed with indie artistry, should return to the double award. Then Avatar could win along with The Hurt Locker, and Gravity with 12 Years a Slave. Next year, even the new Star Wars might have a shot.”

With Solo released in 2018 — though it wasn’t as much of a success as its predecessors — his prediction might still hold true. 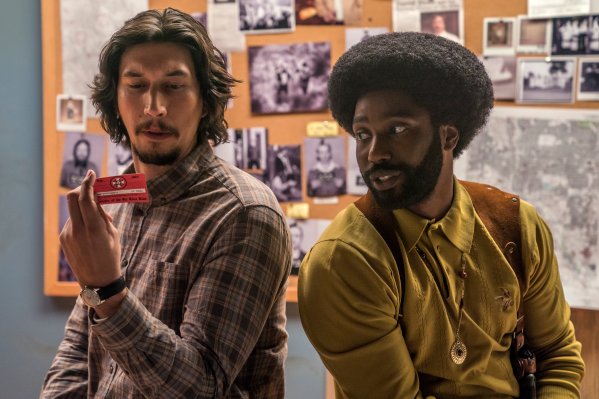 The True Story Behind 'BlacKkKlansman,' According to the Man Who Inspired the Movie
Next Up: Editor's Pick