How a Failed Democracy Uprising Set the Stage for Myanmar's Future

A student wearing an armband stands next to a photo exhibition held as part of events to commemorate the 30th anniversary of the 8888 Uprising at the University of Yangon on Aug. 6, 2018.
Ye Aung Thu—AFP/Getty Images
By Eli Meixler

Bo Kyi remembers the day he became a revolutionary. It was a Monday.

“March 14, 1988. Because that [day] changed my life,” he tells TIME from Mae Sot, Thailand. Then a final-year literature student at Rangoon Arts & Sciences University and now a leading rights activist and former political prisoner, Bo Kyi was galvanized into action by Myanmar’s corrupt and incompetent dictatorship. “We were really dissatisfied and we wanted justice,” he says.

It’s been 30 years since massive, student-led uprisings in Myanmar shook the struggling country’s foundations and threatened to overthrow one of the most vicious dictatorships in the world.

For six months in 1988, protests swelled across the isolated nation, as hundreds of thousands of citizens participated in a nationwide mutiny, led by disaffected students, against the ruthless dictator Ne Win.

The demonstrations were met with staggering violence; thousands were killed, and many more imprisoned and tortured by the military. A bloody putsch in September 1988 installed a military junta that would rule the country for the next 22 years, putting an end to the stillborn revolution. But the events of August and September also set the stage for Myanmar’s future. The democratic fervor also gave rise to Myanmar’s current ruling party, the National League for Democracy (NLD), and its leader, Aung San Suu Kyi.

A general who seized power in a military coup in 1962, Ne Win led Myanmar, then known as Burma, by a disastrous policy of isolation and economic privation known as “The Burmese Way to Socialism.” The result was to convert what one of the region’s strongest postcolonial economies — known as the “rice bowl” of Asia — into one of its poorest. In September 1987, Ne Win withdrew several large denominations of Myanmar’s currency, wiping out citizens’ savings overnight and sending students, who found their tuition savings rendered worthless, rallying in the streets.

Students, joined by civilians, disaffected soldiers, and Myanmar’s revered Buddhist clergy, began daily marches to call for multi-party democracy and respect for human rights, which were met by riot police. Ne Win resigned in July, but appointed as his successor Sein Lwin, a despised general known as “Butcher of Rangoon,” who declared martial law. In an outgoing address, Ne Win warned protestors, “when the army shoots, it shoots to kill.”

A general strike was called for Aug. 8, 1988, reportedly due to the date’s favorable numerology, and mass demonstrations were held simultaneously across the country. The protests became known as the 8888 Uprising.

“We were really excited,” Bo Kyi says of that time. On Aug. 9, Bo Kyi, along with a contingent of 3,000 others attempted to march to Shwedagon Pagoda, Myanmar’s spiritual nucleus. But they never made it there: they were stopped by a military roadblock.

“We negotiated not to shoot us, because we had no weapons,” he says. “But our negotiation was not a success.” The soldiers opened fire, killing a ninth-grade student named Thein Kyaw Toe, who was carrying the fighting peacock banner of the All-Burma Students Union, an umbrella students union group and voice for academic freedoms.

Across the country, the military violently put down the protesters. Estimates of the death toll range of 3,000-10,000, though the authorities claimed only 350 were killed.

The uprising also saw the emergence of the NLD party, led by Aung San Suu Kyi, the charismatic daughter of Myanmar’s independence hero, who addressed half a million protestors at Shwedagon Pagoda in late August 1988, saying:

In September, the military’s top brass was reconstituted as a junta known as the State Law and Order Restoration Council (SLORC), led by reviled strongman Than Shwe, who plunged the country back into secrecy and terror.

A concessionary election was held in 1990, but its results were annulled after Suu Kyi’s newly inaugurated NLD won most of the seats, and thousands were arrested in a new wave of repression.

Bo Kyi was caught and sentenced to prison in March, 1990. He served almost eight years, but he says he doesn’t regret his time behind bars. “Even though they could detain my body, they did not lock up our intelligence,” he says.

Suu Kyi herself entered her first period of house arrest, which lasted until 1995. It would be another 25 years until her party came to power.

Many student activists fled into Myanmar’s border regions or to neighboring Thailand, where they continued to agitate for the junta’s overthrow. Some, like the All Burma Democratic Students Democratic Front, took up arms, beginning a decades-long civil war that brought additional suffering on Myanmar’s civilian population.

What TIME said during the uprising

In its Aug. 22, 1988 issue, TIME described the violence and mayhem that engulfed the country in August and September 1988, when “Burma seemed primed for combustion:”

Much has changed in Myanmar since 1988. Suu Kyi, who became an international icon and Nobel laureate, now presides over the country at the head of an elected civilian government; paralyzing economic sanctions have been revoked, and the country’s GDP is expanding at an eye-opening 6-7% annually, according to World Bank figures. The country has largely rejoined the international community.

But Myanmar is still plagued by crumbling infrastructure and fractious ethnic conflict. The economy remains controlled by a clique of military-interests, and education and healthcare lag far behind regional standards, and over one-third of children are malnourished, according to UNICEF.

Meanwhile, some goals of ’88 are still far from being realized. The country’s military remains unaccountable to civilian oversight and holds 25% of parliament under the 2008 Constitution. It continues to battle armed ethnic groups in Kachin and Shan states, and is waging a campaign of ethnic cleansing in Rakhine that has driven 700,000 members of the persecuted Rohingya minority into Bangladesh in the past year alone.

“We have to go a long way to fulfill our demands in 1988,” says Bo Kyi, who co-founded the Assistance Association of Political Prisoners (Burma) in 2000 to assist Burmese exiles and dissidents. The group opened a small museum in Yangon, the country’s former capital and commercial hub, in March — a first, if modest, memorial to the tyranny of Myanmar’s military rulers. “It will take time. Reform is not so easy,” he adds.

Even under Suu Kyi’s rule, Myanmar still holds 245 political prisoners behind bars, according to AAPP, 48 of them in pretrial detention. The NLD — many of its members former prisoners themselves — has continued to allow the junta’s laws to regulate free speech and assembly and muzzle critics, and has drawn international outrage for failing to condemn the military’s campaign against the Rohingya.

“The NLD is not a government that is respecting human rights and the kind of freedoms that people were on the streets protesting for,” says Mark Farmaner, director of Burma Campaign U.K., a London-based rights advocacy NGO. “The NLD-led government [has] absolutely no interest in rectifying past wrongs.”

For Bo Kyi, the lessons of the 8888 Uprising are clear. “Without people’s participation, we cannot [achieve the] change that we want,” he says. “We will never give up.” 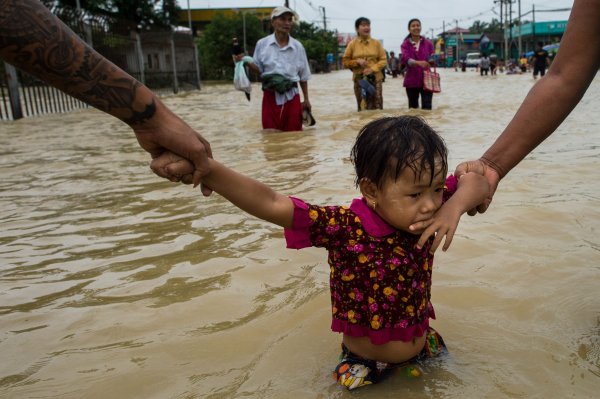 Myanmar Struggles With Catastrophic Floods
Next Up: Editor's Pick