Within hours of Washington unveiling its first round of sanctions, German carmaker Daimler AG froze a plan to make Mercedes Benz trucks in Iran. That’s even after the European Union tried to salvage the Iran nuclear deal by pledging to protect firms from Trump’s assault.

“I wouldn’t be surprised if more companies were to follow Daimler out of Iran,” said Frank Biller, a automobile analyst based Stuttgart, Germany for Landesbank Baden-Wuerttemberg. “With the political situation right now, I’m sure a lot of companies are at least thinking about suspending their activities.”

Companies across Europe — from French energy giant Total SA and German carmaker Volkswagen AG — had initially announced plans to reestablish ties with Tehran following the 2015 deal that provided Iran with relief from economic sanctions in exchange for curbs on its nuclear program. Trade between the Islamic republic and Europe surged to more than $10 billion.

Yet while Trump’s European allies condemned his move because they regard the nuclear deal as crucial for international security, the challenge for businesses is that they now have to weigh the potential loss of American clients against economic ties with Tehran that are minuscule by comparison.

Even when Trump was just threatening to reinstate sanctions in May, Total said it couldn’t risk investing in Iran following the return of U.S. sanctions because of its large U.S. operations.

“Anyone doing business with Iran will NOT be doing business with the United States. I am asking for WORLD PEACE, nothing less!,” Trump said in a Twitter post on Tuesday. “The Iran sanctions have officially been cast. These are the most biting sanctions ever imposed, and in November they ratchet up to yet another level.”

Following an executive order signed by Trump, the U.S. imposed new restrictions intended to stop the purchase of dollar banknotes by Iran, prevent the government from trading gold and other precious metals and block the nation from selling or acquiring various industrial metals. The measures, which took effect at midnight in Washington, also targeted the auto industry and banned imports of Persian carpets and pistachios to the U.S.

The European Union condemned the move and announced it would be rolling out an updated version of its so-called Blocking Statute which bans any EU company from complying with U.S. sanctions and does not recognize any court rulings that enforce American penalties.

“We are determined to protect European economic operators engaged in legitimate business with Iran,” the EU said in a statement late on Monday.

In a televised address on Monday night, Iranian President Hassan Rouhani called on the EU and other countries to take concrete action to save the Iran accord — although he too acknowledged the limits.

“In my visits to Europe and China and Russia and in the talks I’ve had, I’ve seen that they’ve all promised that they will not pay attention to the sanctions,” Rouhani said. “But the problem is their companies, which are under pressure from the U.S. and are affected by the U.S. sanctions.”

To minimize the effect of sanctions, Rouhani said the government had widened the list of essential goods that could be imported and said Iran had enough foreign-currency supplies to meet society’s needs. Iran’s central bank, acting on the eve of the U.S. move, scrapped most currency controls introduced this year in a bid to halt a plunge in the rial that has stirred protests against the government.

The U.S. goal is to get the Iranian regime to stop meddling in countries from Syria to Yemen, halt its ballistic missile program and commit to stricter limits on its nuclear program, not to overthrow the government, the administration officials said.

Rouhani said he’d be open to negotiations if the U.S. is “sincere,” but he added that such talks would be meaningless while his nation is being hit with sanctions. Trump and his top aides have raised the possibility of face-to-face discussions with Rouhani with “no preconditions.”

For European companies, Iran became an investment hot spot following the 2015 accord because it’s home to 82 million consumers who were starved of most Western products for years under international sanctions.

Before dropping business in Iran for a first time in 2010 under those penalties, for instance, Daimler had sold as many as 10,000 vehicles there annually. The company hadn’t yet resumed sale or production of cars or trucks before the pullout announced Tuesday.

The U.S. is preparing another set of sanctions, which take effect in 90 days and will target Iranian oil exports. It is weighing case-by-case exemptions for some countries from those penalties, according to Trump administration officials who briefed reporters on Monday. 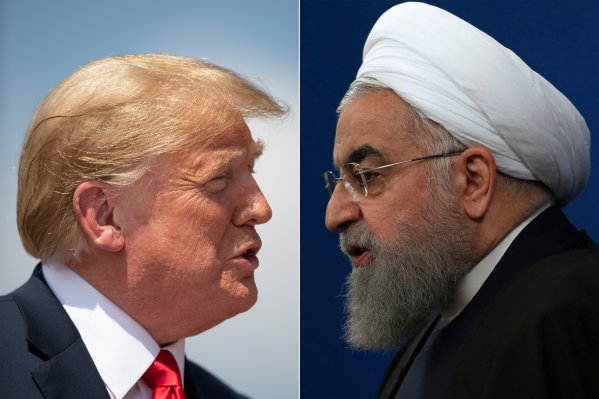 Trump Has Made Iran Public Enemy No.1. How Far Will He Go?
Next Up: Editor's Pick