What to Know About the Mendocino Complex Fire, the Largest Wildfire in California History

The fast-moving inferno, sparked Friday, July 27 in Northern California, has now scorched 290,692 acres and is just 34% contained, according to California’s Department of Forestry and Fire Protection (Cal Fire). The Mendocino Complex Fire is comprised of two neighboring fires that have scorched through thousands of acres each day and destroyed 75 homes. It continues to threaten 9,300 homes and structures in Lake, Mendocino and Colusa counties as nearly 4,000 firefighters work to take hold of the aggressive flames.

At more than 290,692 acres, the fire spans more than 454.2 square miles. That’s almost the size of Los Angeles, nearly double the size of Chicago, and more than triple the size of cities like Philadelphia, Detroit, Portland, Atlanta and Las Vegas.

Here’s what to know about California’s largest ever wildfire.

Where is the Mendocino Complex Fire?

The Mendocino Complex fire is burning in Colusa, Lake and Mendocino counties, just north of wine country in Northern California. The fire surrounds Clear Lake, which is the largest freshwater lake in the state, a vital habitat for fish and other wildfire and a spot for water sports enthusiasts.

The fire itself has burned through the southern portion of the Mendocino National Forest and continues to threaten surrounding towns.

Is there one fire, or are there two?

The Mendocino Complex Fire is comprised of two twin fires: the River Fire and the Ranch Fire. Fire officials use the term “complex” fire to describe two or more fire incidents in the same area that are under the same operational control. It doesn’t mean that the fires have necessarily joined — and in the case of the Mendocino Complex Fire, the River Fire and the Ranch Fire have yet to meet.

The Ranch Fire is the bigger of the two, scorching 241,772 acres at just 20% containment. The expansive fire is burning north of Clear Lake and through the Mendocino National Forest.

The River Fire is smaller, scorching 48,920 acres so far, and burning to the west of Clear Lake. Firefighters have achieved 78% containment on it as of Tuesday morning, making significant progress over Monday night.

A number of complex fires fill the list of the top 20 largest wildfires in California history, including the 192,038-acre Klamath Theater Complex Fire near the Oregon state line in June 2008.

How many homes have been destroyed by the Mendocino Complex Fire?

There have been no fatalities reported as a result of the Mendocino Complex Fire so far. One firefighter has been injured, according to Cal Fire, but the severity of the injury is unclear.

Nine people have died as a result of other fires in the state since July, however. That includes a great-grandmother and her two great-grandchildren, all of whom died in their Redding, Calif., home as a result of the Carr Fire.

How did the Mendocino Complex Fire get so big?

The Mendocino Complex Fire grew under conditions ripe for an aggressive, fast-moving wildfire. Bone-dry vegetation, triple-digit temperatures and afternoon winds fueled the fire as it rapidly spread tens of thousands of more acres with each day since it first sparked. Blazing temperatures during the day have exacerbated the wildfire. California is also coming off of a years-long drought and a notably dry winter, making officials anticipate this season could grow far worse.

It’s unclear how the Mendocino Complex fire began, as its cause is still under investigation. Many of the largest fires in state history were caused by humans. That can range from anything from a spark from a vehicle that catches fire in dry brush nearby, to, in extreme cases, arson. Sparks from power lines have also been known to spur massive infernos, as well as lightening.

What are firefighters doing to stop the Mendocino Complex Fire?

Firefighters fight to save a structure on New Long Valley Rd as the Ranch Fire burns near Clearlake Oaks, California, on Saturday, August 4, 2018.
NOAH BERGER—AFP/Getty Images

More than 3,900 firefighters are working to contain the Mendocino Complex Fire, with more than 60 fire crews and 441 fire engines, according to Cal Fire. Firefighters, with the help of 85 bulldozers, are building and reinforcing containment lines as the fire continues to burn. And these firefighters are are working through the night to stop the blaze.

A number of air tankers have been used as well to drop fire retardant, as well as 15 helicopters to help dump water in the area.

Firefighters have gained significant momentum on the River Fire portion of the wildfire and will continue to work on containment efforts on the Ranch Fire throughout Tuesday.

What was California’s second-largest fire?

A man watches the Thomas Fire in the hills above Carpinteria, California, December 11, 2017.
ROBYN BECK—AFP/Getty Images

Before the Mendocino Complex Fire, the Thomas Gire in Ventura and Santa Barbara was the state’s largest-ever fire. It happened in December 2017 — only nine months ago. The 281,893-acre fire destroyed 1,063 structures and prompted tens of thousands of people to evacuate their homes. That fire, which burned in Southern California, was fueled tremendously by strong winds of up to 30 to 35 miles per hour, making it difficult for firefighters to use aerial operations to help control the flames. 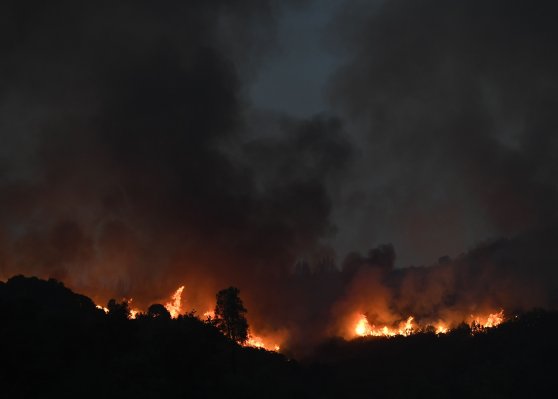 Here's What the California Wildfires Look Like From the International Space Station
Next Up: Editor's Pick