What to Know Ahead of Ohio's Special Congressional Election

Ohio’s District 12 seat has been filled by a Republican for over 35 years. But the district has a solid chance of turning blue if Democrat Danny O’Connor defeats Republican Troy Balderson in a special election over the vacant House of Representatives seat on Tuesday.

Polls in the months leading up to the election indicated a strong lead for Balderson, a current state senator. But more recent ones indicate a dramatically slimming margin for the 56-year-old Republican.

Why is Ohio hosting a special election?

O’Connor, 31, and Balderson are competing to succeed Republican Pat Tiberi, who announced an early retirement after serving more than 15 years in Congress back in October of 2017. Tiberi retired to take an executive position at a business group in Ohio, but it is not totally clear what motivated him to seek employment elsewhere. Some reports suggest Tiberi could have been growing frustrated with continued gridlock in Congress, despite Republicans controlling the Senate, House and White House after President Donald Trump took office.

Who is likely to win?

Throughout the campaign trail, polls indicated a strong lead for Balderson in the district that encompasses both suburbs and agricultural land. In June, a Monmouth University poll showed Balderson ahead by 10 points.

But a more recent one — released on Wednesday from the same university — indicated the race could be extremely close. Two of three voter turnout models showed Balderson was only 1 percentage-point ahead of his 31-year-old Democratic opponent.

This might have something to do with the education level of residents within the Ohio district.

The New York Times reports District 12 has the highest median household income, as well as the highest rate of adults with bachelor’s degrees or higher compared to Ohio’s other 15 congressional districts.

Trump won the district by over 11 points in the 2016 election against his opponent, former Secretary of State Hillary Clinton.

Why does this election matter outside of Ohio’s District 12?

If O’Connor wins, he will be one of several Democrats to upset special elections in historically Republican areas. Democrat Doug Jones won a vacant Alabama Senate seat over Republican Roy Moore in December of 2017. Pennsylvania also faced a Democratic upset in March, when Democrat Conor Lamb narrowly defeated Republican Rick Saccone for the District 18 seat after Republican Representative Tim Murphy resigned. Trump had defeated Clinton in the same area by almost 20 percentage points in 2016.

Republicans appear nervous about the race. The Republican National Committee opened two Ohio offices and spent at least $500,000 in efforts to attract voters ahead of the special election. Additionally, Republican interest groups have dished out more than $3 million for television ads.

Some experts suggest the results of the special election could shed important light on how Republicans may fare in the November midterms.

“Even a narrow victory for Balderson will be a grim portent for the Republican party. It will suggest that many high income, suburban seats considered safe in the fall might be at risk,” said Thomas Wood, an assistant professor of political science at Ohio State University and an expert in vote choice and elections.

Christopher Devine, an assistant professor of political science at the University of Dayton in Ohio, warned against using the special election as a litmus test for the midterms.

“The one thing I will predict with absolute certainty is that people will extrapolate more from what happens in this one election than they really should,” said Devine, who used to live in the 12th District.

If O’Connor won, it could be “interpreted as an indication that the Republican party is weak and that it will face further losses in November in the so-called Blue Wave, for instance — that’s a lot of interpretation for a single election,” he said.

Either way, the race was important enough for presidential trips to the area. Both Trump and Vice President Mike Pence made stops in Ohio to campaign for Balderson in recent weeks. 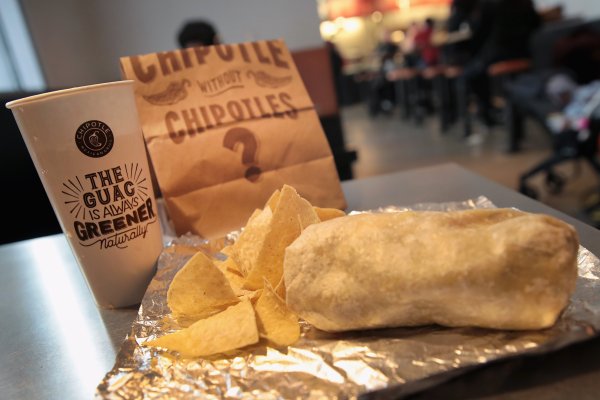 Cause of Chipotle's Latest Heath Scare a Mystery
Next Up: Editor's Pick