President Donald Trump has waded into the debate over the cause of California’s enormous and deadly wildfires by claiming that the state’s environmental protection efforts are stopping firefighters from properly battling the blazes.

On Sunday, Trump tweeted that fast-spreading fires “are being magnified” by “bad environmental laws which aren’t allowing massive amount of readily available water to be properly utilized.” On Monday, Trump doubled down on his claims, saying water being “diverted into the Pacific Ocean” can be used for “fires, farming and everything else.”

“We have plenty of water to fight these wildfires,” says Scott McLean, deputy chief at California’s Department of Forestry and Fire Protection (Cal Fire), in an email to TIME. “Our changing climate is leading to more severe and destructive fires that we are seeing this year and last.”

“There are no more specifics that I can address,” McLean, of Cal Fire, adds, referring to Trump’s tweet.

Fires have scorched at least 290,000 acres so far in 2018 — more than double the area that’s normal for this time of year, Cal Fire says. The Carr Fire, ignited in late July and still burning more than 160,000 acres near Redding, Calif., has killed at least seven people, including a great-grandmother and her two great-grandchildren. The Mendocino Complex fire, two neighboring fires surrounding lakeside towns north of Santa Rosa, Calif., has ballooned to 224,001 acres — now the second-largest blaze in state history. And experts anticipate the 2018 season will only get worse.

Years of drought have resulted in an abundance of dry vegetation across the Golden State, making it easier for wildfires to start – and allowing them to grow faster and and bigger once they catch. Record-setting temperatures in many cities across California makes the intensity of these fires only worse — to the point where they can create their own unpredictable, destructive weather systems.

Neither the drought, nor California’s water management policies, have stopped firefighters from using all the water they need to fight this year’s wildfires, experts say. And befuddled scientists who spoke with TIME could only guess at what Trump meant in his tweets. The White House did not immediately respond to a request for comment.

“I sort of had to suppress a chuckle when I read the President’s tweet,” says Glen MacDonald, a distinguished professor of geography and ecology at the University of California, Los Angeles.

“He clearly doesn’t know what he’s talking about,” echoes LeRoy Westerling, a climate scientist and associate professor at the University of California, Merced.

Both MacDonald and Westerling guessed that Trump could be referring to state laws on water allocation, and specifically controversial restrictions to protect habitats for fish, including salmon. The Sacramento-San Joaquin Delta in Northern California — a vital farming resource and habitat in California that does spill water into the Pacific Ocean — has become a heated political issue in California. Some say farmers should be allowed to draw more water from the delta, rather than reserving it to protect natural habitat for wildlife.

While a heated issue in the state, it has nothing to do with fire suppression efforts, experts say.

“I don’t see how that translates into more or less fire risk. It’s not like we would’ve taken that water and sprayed it on the forest, and it’s not clear how drying out our rivers would reduce our fire risks,” Westerling says. “It’s really a head-scratcher.”

“The thought that for some reason the ecological functioning or use of water by farmers in the Delta is contributing to this fire — it just doesn’t make any kind of sense, whatsoever,” says MacDonald.

Trump also tweeted that California officials “must also tree clear to stop fire spreading.” His tweet could be related to pro-logging efforts or requesting more urgent removal of California’s dead trees. Cal Fire and the U.S. Forest Service have been working together for several years to clear millions of dead, beetle-infested trees in forests across the state to eliminate fuel for potential fires. But, several of the fast-moving fires now burning in California have scorched areas filled with grass and shrubs — not in forests filled with dead trees.

Before his tweet on Sunday, Trump accepted California Gov. Jerry Brown’s Presidential Major Disaster Declaration request to help impacted communities in Shasta County, where the Carr Fire destroyed more than 1,000 homes and buildings. “These kinds of horrible situations bring people together, regardless of the lesser kind of ideologies and partisan considerations,” Brown said in a statement. His office did not respond immediately to a request from TIME about Trump’s tweets.

For years, officials have decried the intense, destructive, and deadly fire seasons in the state as the “new normal.” But some scientists say it’s merely just the beginning. “If we continue to increase greenhouse gases and if we continue to have warming, this is just a stepping stone,” MacDonald says. “It’s not the new normal, this is a stepping stone, and we better start taking action right now.” 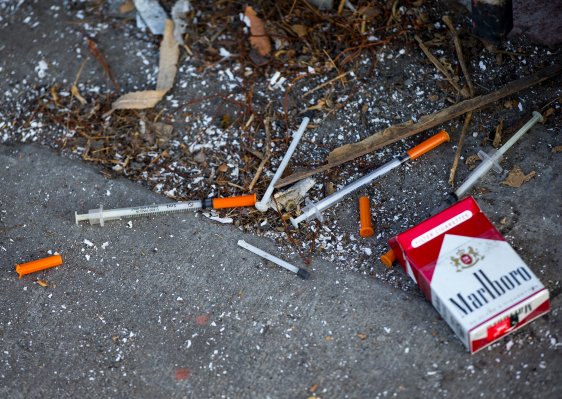 Orange County Officials Try to Block a Needle Exchange
Next Up: Editor's Pick