In a foul humor? Working too hard? Christopher Robin, directed by Marc Forster and featuring characters made famous in the 1920s by A.A. Milne and illustrator E.H. Shepard, is the movie you didn’t know you needed. The advertising campaign makes it look like a corn-syrup-sweet—as opposed to hunny-sweet—thing you might prefer to steer clear of. But the picture has a charming, low-key vibe that is, here and there, brushed with just a trace of adult melancholy. It’s good for kids, but maybe even better for adults who could use a little calming something.

Ewan McGregor stars as the grownup version of Christopher Robin, the little boy who, in Milne and Shepard’s Winnie the Pooh books, gamboled in the Hundred-Acre Wood with his friends Eeyore, Piglet, Rabbit, Owl, Kanga and baby Roo—as well as, of course, the bear of very little brain, Pooh. (This isn’t the story of the real Christopher Robin Milne, son of A.A., as explored in the 2017 film Goodbye Christopher Robin, but a wholly fictional imagining.) Before we meet Christopher Robin as a grownup, we see him as a child—at this point played by Orton O’Brien—saying good-bye to his friends in the wood: In the movie, they’re CGI-animated versions of the characters Shepard so memorably illustrated, complete with fur that’s been mashed down by lots of hugging and the occasional encounter with spilled honey. Young Christopher Robin is off to boarding school, and it’s time to leave childish things behind. He gets through school. He goes off to fight in World War II. Upon his return he falls in love with, and marries, a woman named Evelyn (Hayley Atwell). The two have a child, Madeline (Bronte Carmichael).

All of that happens practically before the opening credits have finished rolling. Then we see what has become of Christopher Robin: He holds a steady but pressure-filled job with a luggage manufacturer. His livelihood is taxing and takes him away from his family. A work project means he has to send them on a long-planned weekend in the country by themselves, a turn of events that disappoints young Madeline and upsets Evelyn.

And then, suddenly, Pooh—still missing his best friend after all these years—slips through a magical Hundred Acre Wood portal (or something) and shows up in London. Pooh (voiced by Jim Cummings) is thrilled to be reunited with Christopher, but Christopher is none too happy to see him. He’s got too much to do. And it’s just too weird. Christopher drags the poor bear off to the train station, eager to send him back to Sussex from whence he came. Pooh further embarrasses his old friend by talking incessantly—his words and movements are audible and visible to everyone, not just Christopher.

It takes a while, but Christopher finally softens. He’s also reunited with the rest of his talking, sawdust-filled posse, the most delightful of whom might be Eeyore (voiced by Brad Garrett): The perpetually dejected gray donkey has a sullen quip for every occasion. (Other voice performances include Sophie Okonedo as motherly, protective Kanga, Peter Capaldi as dithery Rabbit, and Toby Jones as the ever-helpful, if sometimes somewhat ill-informed, Owl.)

You can guess what the movie’s lesson is: We all need to slow down and enjoy life. Or worse, yet, get in touch with that dread creature, our Inner Child. But somehow, in Forster’s hands, it all works. Shot by Matthias Koenigswieser, the picture is lovely to look at, a purely English heaven of heathery meadows and sun-dappled clearings. Forster employs some artful dissolves: At times the live action melts into an imaginary world of Shepard-inflected line drawings, and back again. And there’s some gentle slapstick, though nothing too aggressive or noisy: The most delightful gag involves Pooh padding across first a wood floor and then a carpeted one, squinching along on sticky, honey-smeared feet.

But it’s doubtful the movie would work at all if not for McGregor: He turns Christopher’s anxiety into a haunting presence, the kind of storm cloud that we can all, now and then, feel hovering above us. Yet McGregor is also an actor capable of expressing unalloyed delight. And when, as Christopher Robin, he finally does, some of that delight rubs off on us too. It’s just the thing when it’s time for a little something, even if you’re not quite sure what that something is. 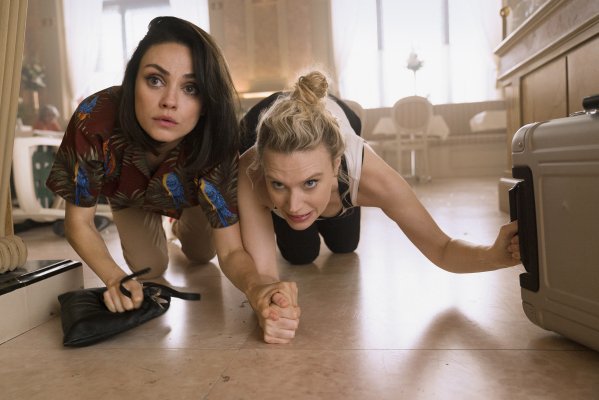 Mila Kunis and Kate McKinnon Make the Most of the Well-Meaning But Uneven Spy Who Dumped Me
Next Up: Editor's Pick