Activists in favour of the legalization of abortion disguised as characters from Canadian author Margaret Atwood's feminist dystopian novel "The Handmaid's Tale," display green headscarves as they perform at the "Parque de la Memoria" (Remembrance Park) in Buenos Aires, on August 5, 2018.
Alejandro Pagni—AFP/Getty Images
Ideas
By Claudia Piñeiro
Piñeiro is an Argentine novelist, playwright and screenwriter, best known for her crime and mystery novels, most of which became bestsellers in Argentina.

Legal abortion or illicit abortion: this is what we’re discussing in Argentina these days. The country is one step away from approving a law that would cease to make abortion illicit and illegal. (The Senate votes on Wednesday.)

I have a hard time explaining it to friends and colleagues from other parts of the world. The image they have of Argentina does not match that of a country refusing to grant women this right. A pioneer in human rights, Argentina boasts one of the highest ranked universities in the world, has a thriving and diverse cultural life, and introduced same-sex marriage more than eight years ago. And my country brags a growing feminist movement, taking to the streets and making its voice heard loud and clear.

How can there be no abortion in Argentina, they ask in awe. It is then that I correct them: it’s not that there is no abortion. In fact, it happens all across the country, but abortion is illegal, clandestine, outside the health care system. Sometimes it is bloody. Sometimes it is deadly.

It is estimated that 500,000 abortions are performed in Argentina every year. This is a rough figure. Being an illegal practice, official records are unavailable. This reality has been hidden for decades, yet now there is no meeting, birthday celebration, commute or waiting line where abortion is not mentioned. Shyly and with embarrassment at first, then openly and holding our heads up high, we start to utter what we used to keep quiet—and men have to listen.

In this way, we have learnt that the degree of separation to reach a woman who had undergone abortion is minimal. There are friends, colleagues, daughters, sisters and neighbors around us who experienced an unintended pregnancy and decided to abort illegally.

Depending on socio-economic level, abortion carries diverse risks. It might have been performed in a private health care institution, in a dodgy medical office, in the house of the pregnant woman. The best-case scenario would be using the drug misoprostol. If not, a metal coat hanger, a knitting needle or a sprig of parsley when no other alternative is at hand.

Faced with this reality, what are we waiting for? If we keep prohibiting abortion, it still won’t stop Argentine women from having them. It’s time we legalize and provide a public health framework for a practice that existed, exists and will continue to exist.

Argentina’s criminal code imposes sentences of one to four years for the woman who chooses to undergo an abortion, unless her life is at risk, the pregnancy resulted from a rape, or the fetus is not viable outside the uterus. There are no other legal conditions for an abortion.

However, if one starts asking, a significant majority of Argentinians will say that they do not think it logical to issue a prison sentence to a woman who terminated a pregnancy, no matter her reasons.

If society has already “decriminalized” this action, we should reflect this in the law. If the punishment for abortion is not an effective deterrent against the practice, with hundreds of thousands of abortions performed every year, why do we support its inclusion in the criminal code?

Why do some of the self-proclaimed “pro-lifers” insult or physically attack girls wearing a green neckerchief, the symbol of those demanding legal abortion? Why do they threaten legislators and their families who state their support for decriminalizing abortion? What moves them shout “murderers” at those in favor of changing the law, or write on walls, “Abortionists, we’ll get even with you”?

These are just excuses. If we look deeper, we will discover that at the heart of the issue is the sexuality of women and their right to choose not to become a mother. In short, their desire.

Women’s desire produces terror. If it were not so, how can it be understood that an embryo resulting from a rape can be discarded but not the embryo from a consensual relationship? How is it understood that in-vitro embryos may be discarded? What is the difference between them and why are some protected by the constitution but not others? Why are some considered babies but not others? The embryos are identical. The only thing distinguishing them is if they resulted, or not, from the sexual desire of a woman.

The Church, as well as other backward yet very powerful interests in my country, are appalled at the desire of women. That’s why they condemn, punish and criminalize it. In their eyes, women—without exception—are born to be mothers. They have established that as our aim, although it is not our will.

To them, desire has to be paid. If you had an enjoyable time during sexual intercourse, the contraception failed and an unintended pregnancy results from it, then the woman has to “own it.” They say, “she is an adult,” “she should have kept her knees together.”

These are some of the words we have heard uttered in the 21st century by persons in Congress, journalists, communicators and other personalities. Some Catholic Church bishops have called us “the crazy women in green neckerchiefs,” “murderers”, and we have been compared with Cain, Herod and Pilate. Pope Francis even said that abortion is the “white glove” equivalent of Nazi eugenics programs.

In spite of the enormous pressure exerted by different power groups, Argentina’s Senate could vote on Wednesday to legalize abortion. It would solve a public health issue, and would also take into account the desire of women and their right to take control of their lives. We should not be afraid. Rather, the opposite. 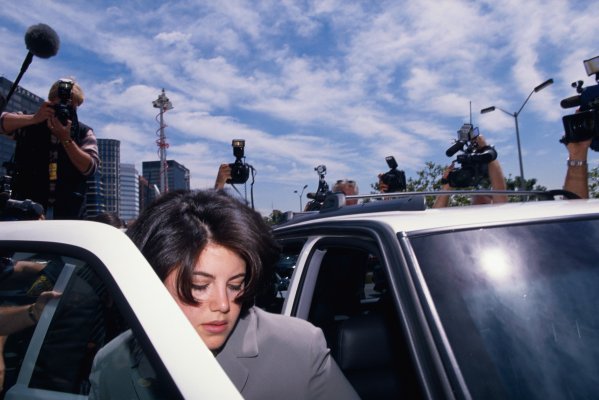 Monica Lewinsky’s Testimony Shows How Much (and How Little) Progress We've Made in 20 Years
Next Up: Editor's Pick