Authorities have urged an end to the protests, as the students’ outrage paralyzes the city of 18 million. Police have reportedly fired tear gas and blanks in an effort to disperse the crowds, and on Thursday, protests turned violent with several reported assaults.

Marches and sit-ins along main thoroughfares have rendered Dhaka’s daily gridlock impassable. The U.S. and Australia embassies warned of significant delays and disruptions.

Students marched through city streets demanding to see people’s driving licenses and parading through the streets chanting “we want justice.” The government shut down high schools, according to Agence France-Presse, and officials promised the teens their road safety concerns would be considered.

But students showed no signs of abandoning their demonstration.

“They should have taken our demands seriously, but they didn’t,” Imran Ahmed, a protesting student, told AFP.

The protest began Sunday after a bus racing for passengers reportedly struck a group of waiting college students, killing two and injuring several others.

Dhaka’s buses are notoriously unregulated and accident-prone. Operated by competing private companies, the coaches race to get to waiting passengers first.

Research from the National Committee to Protect Shipping, Roads and Railways found that more than 4,200 people were killed in road accidents last year, with most of the fatalities caused by reckless drivers.

Until their demands are met, students have reportedly taken up enforcing traffic laws on their own, stopping driver for license checks.

Bus companies have responded by taking their vehicles off the road, leaving commuters stranded.

On Thursday, a traffic sergeant refused to show his driving license, prompting students to seize his motorbike and set it on fire, according to the Dhaka Tribune.

Traffic authorities have already met some of the stipulations, and will soon install footbridges near schools and adopt tougher enforcement measures against drivers without proper licenses, Home Minister Asaduzzaman Khan Kamal said, according to the Tribune.

“They will set up check posts at each point in the city from where buses set off,” he said.

He called on the students to stop playing vigilante traffic cops.

“In the last five days 317 vehicles have been vandalized and eight burned. We are urging you not to continue this,” he said. 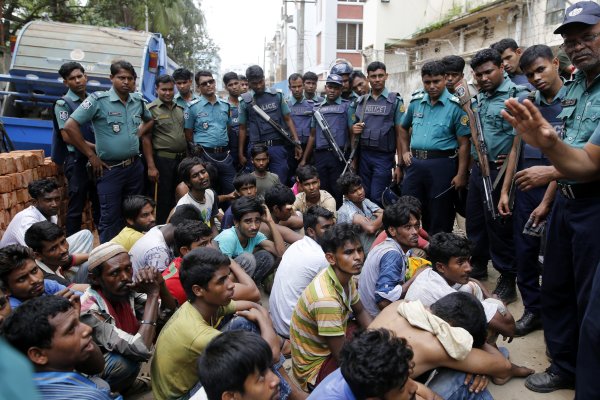