At least three people were killed in Zimbabwe’s capital Harare Wednesday when troops opened fire on ­rioting opposition supporters who had taken to the streets alleging foul play in the country’s historic election.

Security forces reportedly fired live ammunition, water cannons and tear gas into crowds of demonstrators in what the justice minister termed a bid to restore “peace and tranquility.”

The sudden outbreak of violence clouds an election seen as a fresh start for Zimbabwe as it emerges from nearly four decades of rule under former dictator Robert Mugabe.

Soldiers beat a supporter of the opposition Movement for Democratic Change outside the party's headquarters in Harare, Zimbabwe on Aug. 1, 2018.
Mike Hutchings—Reuters

Tensions began simmering when results from Monday’s presidential vote were delayed. Opposition supporters claimed the holdup signaled an attempt by the governing party to rig the outcome, while the opposition party claimed it had won before counting concluded.

On Wednesday, the election commission announced the ruling party had won control of parliament, netting two-thirds of the seats. Opposition supporters amassed in several parts of the city, and protests soon turned violent.

Who Were the Election’s Frontrunners?

Zanu-PF, which has been in power since Zimbabwe’s independence in 1980, has been accused of rigging previous elections for Mugabe’s benefit.

In a surprise address Monday, Mugabe denounced his former party. While he did not explicitly endorse Chamisa, Mugabe has backed a party that is among the coalition that supports his Movement for Democratic Change party.

In his rambling address, Mugabe declared that he “cannot vote for ZANU-PF.” Of Chamisa, he said the opposition leader “seems to be doing well at his rallies… I wish to meet him if he wins.”

Mnangagwa, known by the nickname “the Crocodile” after a guerrilla gang he helped found in the 1960s, promised a clean race.

For the first time in 16 years, election monitors from the U.S. and the European Union were allowed to assess whether the poll was free and fair.

More than 75% of the 5 million people registered to vote reportedly cast ballots.

What Are the Results?

While the voting was peaceful, international election monitors called for results not to be delayed too long.

The electoral commission has announced results for 198 of the 210 parliamentary seats, with 140 swinging in Zanu-PF’s favor, according to the BBC. But it’s the presidential results everyone is waiting for.

People gather a day after elections to look at results posted outside a polling station in Harare, Zimbabwe on July 31 2018.
Jekesai Nijikizana—AFP/Getty Images

The commission has until Saturday to name the winner, and is insisting on tallying all of the votes from more than 10,000 polling stations first. The winner will need more than 50% of the votes, otherwise a runoff will be called on Sept. 8.

Why Is the Outcome Already Being Contested?

As the waiting period stretched on and anxieties grew, Mnangagwa called for patience.

But the MDC pre-empted official results. Chamisa declared his party the winner of the popular vote and accused the election commission of preparing “fake presidential results.”

Former finance minister and current opposition politician Tendai Biti said Zanu-PF was attempting to interfere “with the people’s will,” and warned the party not to “plunge Zimbabwe into chaos.”

As the oppositions’ accusations of bias mounted, protesters gathered in several points throughout the capital, many planning to march on the election commission headquarters. Protesters reportedly started small fires in the streets, and police retaliated with water cannon and tear gas.

Not long after, troops were deployed to dispel rioters. Police reportedly drew whips to try to clear the roads. What were likely warning shots were heard, soon followed by early reports of soldiers opening fire on protesters.

As Zimbabwe emerges from Mugabe’s decades-long dictatorship, a widespread perception of fraudulent elections would mar the country’s chances for reintegration and badly needed economic assistance.

Both the U.S. and the E.U. have indicated sanctions relief and their backing of a bailout will depend on credible elections

But as images of soldiers firing on civilians surfaced Wednesday, the U.S. embassy said it was “deeply concerned” and urged defense forces to “use restraint.”

“Zimbabwe has an historic opportunity to move the country towards a brighter future for all its citizens,” it said in a statement. “Violence cannot be a part of that process.” 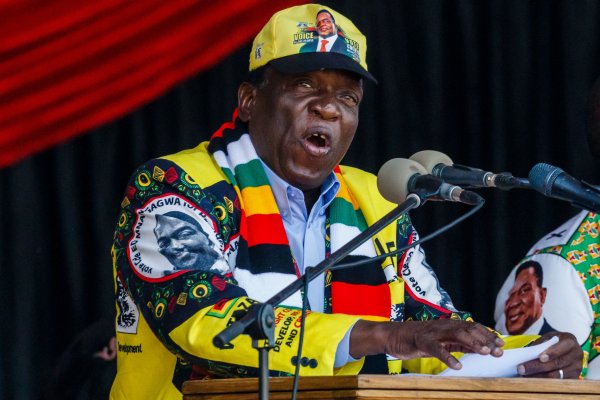 Zimbabwe Is Voting In Its First Ever Election Without Mugabe. Here's What to Know.
Next Up: Editor's Pick