(Bloomberg) — Apple Inc. shares jumped 3.5 percent in pre-market trading Wednesday after the company projected sales that suggest consumers are still snapping up the company’s high-end iPhones even as updated models are on the horizon.

The Cupertino, California-based technology giant said on Tuesday it expects fiscal fourth-quarter revenue between $60 billion and $62 billion. Analysts were looking for $59.4 billion, according to data compiled by Bloomberg. Fiscal third-quarter results also beat Wall Street expectations, at one point sending the shares to $198 in extended trading, a record price if the increase holds through Wednesday.

Apple’s stock gained 12 percent this year though Tuesday’s close — before the results were announced — putting the iPhone maker on a path to become the first U.S.-based company with a market value of $1 trillion.

“These results and guidance will increase investor confidence,” Shannon Cross of Cross Research wrote in a note to investors. “We expect the vast majority of Apple’s product line-up to be refreshed during the next couple of quarters which should support near-term results.”

More than a decade after its debut, the iPhone is still Apple’s most-important product, accounting for about 60 percent of revenue. While unit sales have slowed recently, the company is building digital services and a suite of other gadgets around the device. Those newer businesses, along with higher iPhone prices, have supported revenue growth.

Apple’s fiscal fourth-quarter outlook is closely watched because this is usually the period when the company unveils new iPhones. The company is expected to launch three new phones later this year. That’s raised Wall Street expectations for more sales and profit.

The results “were driven by continued strong sales of iPhone, Services and Wearables, and we are very excited about the products and services in our pipeline,” Tim Cook, Apple’s chief executive officer, said in a statement.

The company sold 41.3 million iPhones in its third quarter, generating revenue of $29.9 billion. That was driven by a higher average selling price of $724, thanks in part to the iPhone X, which starts at $999.

Analysts were looking for 41.6 million iPhone units in the quarter, and an average selling price of $699, according to estimates compiled by Bloomberg News.

During a conference call with analysts, Cook said the iPhone X was the most popular iPhone in the fiscal third quarter, gaining market share around the world.

Apple reported record services revenue of $9.55 billion, up 31 percent from a year earlier. Analysts forecast $9.2 billion. The category includes the App Store, Apple Music, iCloud storage and Apple Pay. The company is working on expanding these offerings with original videos and a news subscription service.

Cook told analysts that Apple is on track to meet a goal of doubling Services revenue by 2020. Paid subscriptions have now passed 300 million, he also noted.

Apple said its gross profit margin will be 38 percent to 38.5 percent in the fiscal fourth quarter, versus analysts’ estimates of 38.2 percent.

The company’s Other Products segment continued to see strong growth, with revenue up 37 percent to $3.7 billion. The category includes AirPods headphones, the Apple Watch, Apple TV, and the HomePod. Cook said wearables were a highlight of the quarter, with sales up 60 percent year over year. The Apple Watch had a record quarter with mid-40 percent growth, the CEO also said. The company doesn’t report sales figures for the Watch.

Apple said it sold 11.6 million iPads in the quarter, up from the 11.4 million in the year-ago period. In March, Apple launched an updated $329 iPad geared toward students. It’s also working on an upgraded Pro model with iPhone X features like Face ID, which could increase sales of the device. 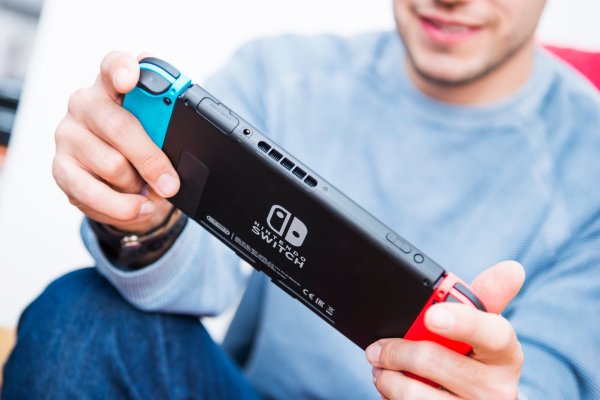 This Hedge Fund Founder Made a Massive $400 Million Bet Against Nintendo
Next Up: Editor's Pick