3 Russian Journalists Have Been Killed in the Central African Republic

Three Russian journalists were investigating a private security company’s alleged connections to the Kremlin when their car was reportedly ambushed by unidentified attackers. Their bodies were found in the town of Sibut, miles from the Central African Republic’s capital, but their driver managed to escape.

The three journalists killed Monday night were identified by their ID cards as Russian nationals Orkhan Dzhemal, Aleksandr Rastorguev and Kirill Radchenko, according to a Russian Foreign Ministry statement translated by The New York Times.

It remains unclear who was behind the attack on the journalists, or whether the killing was related to their investigation.

The trio was on assignment for the Investigation Control Center, a Russian news outlet backed by exiled oil tycoon Mikhail B. Khodorkovsky, who is also a staunch critic of the Russian government.

They were reportedly making a documentary about the Wagner Group, a shadowy security company that has allegedly received contracts from the Kremlin for secret military operations in Syria and eastern Ukraine, the Times reports.

An editor from the Investigation Control Center, Anastasia Gorshkova, told Russian media on Sunday that the journalists had tried to enter an estate housing members of the security company, but were told they must first procure accreditation from the country’s Defense Ministry.

On Monday, they were supposed to meet a local contact in Bambari, a town 235 miles away from the capital, Bangui, via a route that cuts through Sibut.

The mayor of Sibut, Henri Depele, told Reuters that the journalists were ambushed around 10 p.m. local time.

“Armed men emerged from the bush and opened fire on the vehicle,” he said, citing the account of a driver. “The three journalists died instantly.”

According to the Times, the Russian Foreign Military agreed to provide the Central African Republic with “free military technical assistance” in March, sending five military instructors and 170 advisers there.

Russian investigators said they are looking into the deaths of Dzhemal, 51, Rastorguev, 47, and Radchenko, 33, who respectively worked as a military correspondent, a documentary filmmaker and a cameraman. 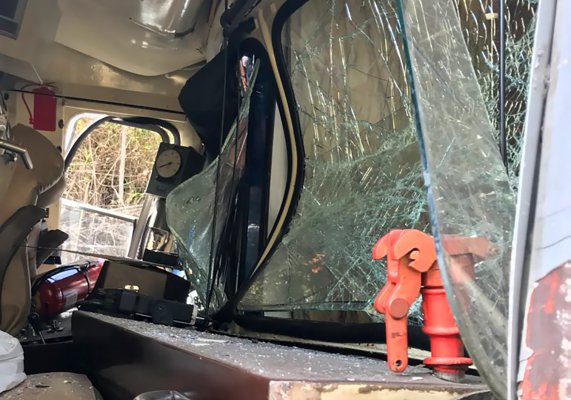 Tourists Injured in Train Crash Near Peru's Machu Picchu
Next Up: Editor's Pick