Everything You Need to Know About the Last Eclipse of 2018

The moon eclipses the sun above the campus of Southern Illinois University on August 21, 2017 in Carbondale, Illinois.
Scott Olson/Getty Images
By Gabby Raymond

For much of the world, the last chance to catch an eclipse for a while is about to happen.

This weekend’s partial solar eclipse will span across many countries in the Northern Hemisphere on Saturday, Aug. 11 — becoming what could be the most widely-viewed solar eclipse of 2018.

The eclipse kicks off at 5:46 a.m. E.T., and will be visible in Greenland before expanding toward Iceland, northern Europe, most of northern Russia and part of northern China, according to NASA. If the weather is good in the morning, when the eclipse starts (around 4:02 a.m. E.T.), then it may become the most viewed solar eclipse of the year. The wide path across parts of the Northern Hemisphere means much more people will be able to catch it than the July 13 partial solar eclipse. Even though it will be visible to a wider swath of the world, the August 11 eclipse still won’t be visible in the U.S.

In addition to potentially being the most viewed eclipse, the August 11 eclipse will also be the last eclipse — lunar or solar — of 2018. Eclipses happen approximately every 173 days during what’s called an eclipse season. According to NASA, twice a year, the moon’s orbit crosses paths with the sun’s orbit for 34 days when up to three eclipses can happen.

In 2018, the first eclipse was the super blue blood moon on Jan. 31 followed by a partial solar eclipse on the Feb. 15. The Aug. 11 eclipse marks the end of this eclipse season after two previous eclipses during the month of July. You’ll have to wait until Jan. 21, 2019 for the next eclipse. It will also be a supermoon.

To celebrate the last eclipse of the season, here’s everything you need to know to prepare for the August 11 partial solar eclipse.

What is a solar eclipse?

A solar eclipse happens when the moon comes between the Earth and the sun, casting a shadow on the planet. According to Space.com, because the moon is relatively smaller than Earth, the shadow is cast on a small area of the Earth’s surface. However, for those who can see it, during a total solar eclipse the moon will cover the sun, blocking out the visible light. The point at which the sun is totally blocked is called totality, and that can last from around 30 seconds to seven minutes.

During a partial solar eclipse, there is no totality because the moon will only cover a portion of the sun, according to NASA. Partial eclipses tend to look different — it can leave only a sliver of the sun visible, it can cover half of it can only cover a very small potion — depending on your location during the big celestial event.

A solar eclipse is basically the opposite of a lunar eclipse, like the one that happened on July 27. A lunar eclipse occurs when the Earth comes between the moon and the sun, causing the moon to be covered by Earth’s shadow and fade away. Unlike solar eclipses, a lunar eclipse often lasts much longer, and are less rare because they can be seen by everyone on the side of Earth where it’s night, while only those within the radius of the moon’s shadow on Earth can see a solar eclipse.

What time is the solar eclipse?

The partial solar eclipse will start at 4:02 a.m. E.T. on August 11 and the moon will reach its maximum coverage of the sun at 5:46 a.m. E.T., according to NASA. The eclipse will not be visible to those in this time zone, but if you live in the U.S. and want to see the solar eclipse, the closest area you can view it is northern Canada.

Where can you see the solar eclipse?

The solar eclipse will be visible in Russia, northern parts of China, Mongolia, Northern Europe and northern Canada as well as the Arctic Ocean. The moon will cover approximately 73% of the sun when the eclipse is at its peak, according to NASA.

Other parts of the world that will have views of the partial solar eclipse, albeit a much smaller version of it, include Harbin, China, Nuuk, Greenland and Seoul, South Korea.

Just like during the August 2017 total solar eclipse, you will need special eclipse glasses to get the best viewing experience of the partial eclipse to protect your eyes.

According to the American Astrological Society (AAS), partial solar eclipses can be very dangerous to look at with the naked eye. During a partial solar eclipse, only a portion of the sun is covered by the moon’s shadow, making it just as bright as the sun on a typical day.

The AAS recommends getting special-purpose sun filtering glasses and not looking at the sun through binoculars, a camera lens or a telescope even with the eclipse glasses on because of the strength of the sun’s light. Instead, they suggest the “Pinhole Projection” or the “Optical Protection” methods for viewing safety. 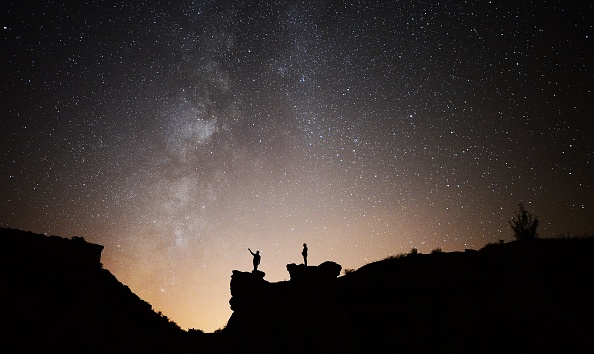 How to Watch the Perseid Meteor Shower Tonight
Next Up: Editor's Pick