A viral video capturing a shocking scene of violent harassment outside of a Paris cafe has sparked outrage across France, the Guardian reports.

CCTV footage appears to show 22-year-old Marie Laguerre in a red dress crossing paths with a bearded man in a black T-shirt outside of a cafe. He says something to her, and she turns her head and replies. Both continue walking in opposite directions.

A few seconds later, the man picks up an ashtray from an empty table at the cafe and hurls it in her direction. She is no longer in view.

The man then walks back towards the woman, who moves back into the frame, and strikes her across the face so hard she loses her footing and hits the glass fencing around the cafe terrace.

Shock and confusion grip customers at the cafe, one of whom grabs a chair, before the attacker walks off.

The video has gone viral since Laguerre, an architecture student, posted the footage on Facebook, and has given new momentum to the country’s effort to outlaw public sexual harassment.

According to Laguerre, the man “made dirty noises, comments and whistled” when the two passed each other, which Laguerre responded with “Ta gueule,” or “shut up,” the Guardian reports.

“I didn’t even think he heard me,” Laguerre told Le Parisien. “But he had heard me and suddenly things happened suddenly. He grabbed an ashtray and threw it at me. It missed my head by a few centimeters.”

“I felt hatred. I refused to be demeaned, it was humiliating,” she added.

The incident is being investigated, but the attacker has yet to be identified.

French equalities minister, Marlène Schiappa, said she was “outraged … but not surprised, unfortunately” by the assault, according to the Guardian.

“The political response must be strong and it is, because for the first time in France we will fine those responsible for street harassment,” Schiappa added.

Schiappa helped propose a new bill in March that would charge immediate fines of up to $920 for public sexual harassment. Backed by French President Emmanuel Macron, the bill would charge sexual offenders on the spot for public behavior like “degrading or humiliating comments” or “sexual or sexist” actions towards someone.

“I was so annoyed I didn’t want to hide, to look down. That he dared to be angry when it was me who had reason to be angry,” Laguerre told journalists. “I turned to him and everything went extremely fast, but then I knew he was going to hit me. I was even ready to fight. When the blow came, I took it without showing any emotion. He continued to scream.”

Laguerre also posted the video on YouTube, where she wrote in French, “This is unacceptable behavior. It happens everyday. These men think they can do anything in the street, who think they are allowed to humiliate us and who don’t like it when we are offended. It’s unacceptable.” 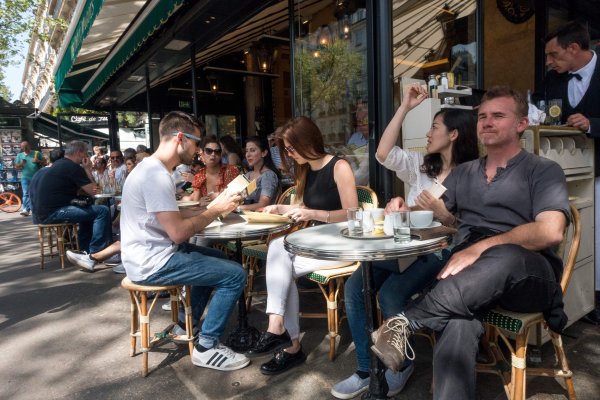 Iconic Parisian Bistros Are Under Threat. Can They Be Saved?
Next Up: Editor's Pick