A congressional race in Virginia’s Fifth District has taken a bizarre twist as Democratic candidate Leslie Cockburn accused her Republican opponent, Denver Riggleman, of being a devotee of “Bigfoot erotica” over the weekend.

Cockburn pointed out Riggleman’s apparent passion for the myth of Bigfoot in a tweet, which has now gone viral thanks to her accusation and Riggleman’s interview with Matt Kibbe on CRTV, a right-wing outlet.

Cockburn tweeted a screengrab of what appears to be Riggleman’s Instagram account showing a lewd picture of Bigfoot on Sunday. “This is not what we need on Capitol Hill,” she wrote.

In his interview with CRTV, Riggleman says he is “skeptical” Bigfoot exists, but he describes elaborate theories about the legendary monster, telling Kibbe, “Bigfoot can attack you with infrasound, like an elephant — I just want to let you know — or psychic terror vibes, to make you run through the woods and crash into a tree so they can drag you into the woods and create baby Bigfoots.”

Riggleman, an Air Force veteran and businessman turned Congressional candidate, also self-published a book about Bigfoot titled The Mating Habits of Bigfoot and Why Women Want Him, the Washington Post reports. He wrote an earlier book about Bigfoot called Bigfoot Exterminators, Inc.: The Partially Cautionary, Mostly True Tale of Monster Hunt 2006 with an ESPN writer more than a decade ago.

The Republican congressional candidate has not shied away from the issue however, acknowledging his passion for the creature with a tweet responding to Cockburn’s accusations, as well as giving interviews to major media outlets like the New York Times.

While it’s unclear how Virginia feels about experimenting with Bigfoot believers, the internet is having a field day with “Bigfoot erotica.” The Washington Post and Rolling Stone have pointed out that Bigfoot erotica and monster erotica are genres that are in fact available on Amazon, mostly in the form of self-published fan fiction.

Riggleman posted his full interview with CRTV on his official campaign website. You can watch it here: 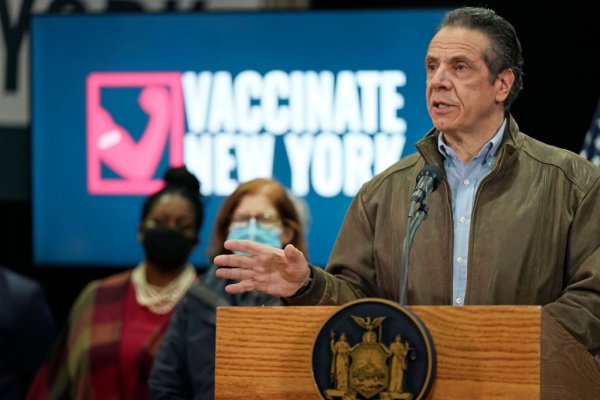 Top N.Y. Democrats Call on Cuomo to Resign
Next Up: Editor's Pick