Your Guide to Seeing Spectacular Views of Mars This Weekend

Mars will appear unusually large and bright starting this Friday as the Red Planet makes its closest approach to Earth in 15 years.

The phenomenon known as Mars Opposition typically happens every two years, but this year, Mars will be closest its been to earth since 2003. Mars and Earth, like all other planets in our solar system, both orbit the sun, but do so at different speeds. Since Earth is closer to the sun, it orbits — making two trips around the sun in the time it takes Mars to orbit once. Also known as celestial orientation, opposition occurs when the sun and Mars are on opposite sides of Earth.

Some oppositions brings us closer to Mars than others. NASA said back in 2003, Mars made its closest approach to Earth in nearly 60,000 years, only 34.9 million miles away, and that it won’t be that close again until the year 2287.

Here’s what you need to know about the best times and days to see Mars as well as if you need any special equipment to catch a glimpse of the Red Planet.

When is the best time to see Mars?

According to NASA, Mars Opposition begins Friday, July 27 around midnight.

Mars will be at its brightest Friday night due to an opposition surge that is affected by the planet’s angle of the sun — giving you the clearest view of the Red Planet.

What is the best way to see Mars?

You’ll be able to see Mars with the naked eye, but spectators can use binoculars or telescopes to get a more detailed view.

Because Mars Opposition lines up with the “blood moon” lunar eclipse, which isn’t visible in North America, it can be easy to confuse the two reddish orbs in the sky. The moon will appear larger and Mars will be right beneath it, slightly smaller.

If you don’t want to leave the comfort of your home to see Mars, you’re in luck. There are plenty of live streams available online, including The Virtual Telescope Project live stream that will be broadcast from Rome starting at 6:30 p.m. on Friday.

Try your best to catch the opposition this year, since Mars won’t be this close until September 2035. 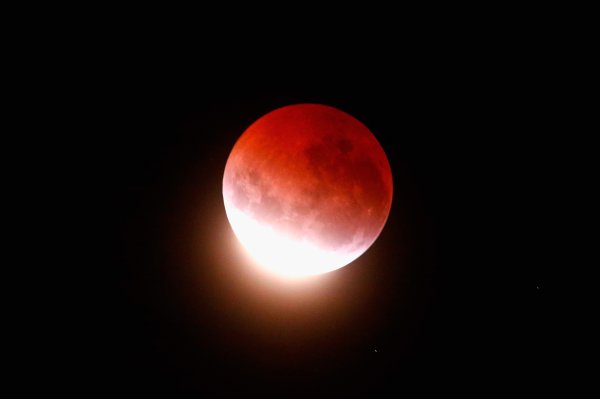 Americans Can't See Tonight's Lunar Eclipse. Here's When the Next Lunar Eclipse Will Be Visible in the U.S.
Next Up: Editor's Pick