The final panel of a two-day conference in San Francisco was about to start, but first there was a surprise. Employees at a tech startup called Culture Amp, who are known as “campers,” had spent a full year preparing for the event, a confab for 900 attendees about the importance of “putting culture first” when it comes to building a business. So the higher-ups had commissioned something special: a theme song about the company itself, which sells a platform that companies like Airbnb and Lyft have used to gather employee feedback.

A bewildered crowd, piled into a building along the waterfront that occasionally serves as a cruise ship terminal, watched musicians take the main stage and start to perform a catchy techno-pop tune. “I used to be a bitter CEO,” lead singer Sam Huntington crooned, “thought I had to do it on my own / I was dismissive in my tone / But now I’m a better humaaaaan.” By the time the song reached its hook — “Using feedback from the insiiiide / Building culture from the insiiiights” — the “campers” at the back of the room, clad in yellow T-shirts, were swaying and throwing their arms in the air.

This is the type of experience that a New York City-based band is selling as part of their cheeky new enterprise, aptly called Music for Business. Its tag line: “Original songs for your company, customers, culture, and soul.” After struggling for years to make decent money as a straight musical act, the foursome had a revelation last year: People don’t seem very interested in rock music, but everyone seems obsessed with tech startups. “So what if,” Huntington says of the band’s thinking, “we started creating music that was for companies themselves?”

Since launch, the musicians have performed at several conferences, such as Culture Amp’s this June, and for a handful of companies, including industry darling Slack. They’ve taken to wearing shirts and ties for gigs (despite the fact that such attire is generally spurned in Silicon Valley) and have started building an oeuvre of songs inspired by things like inboxes, operating systems and the Microsoft Office Suite.

“I certainly never pictured that this was how it would be,” Huntington says of cold-calling tech companies to offer his group’s services. But, he adds, they’re already seeing the business “eclipse revenue generated from our artistic endeavors.”

The transition isn’t as big of a jump as it might sound. The band, known as Mobile Steam Unit, has always had an eccentric viewpoint. (The name comes from a zany “creation myth” about pollution in New York City’s Gowanus Canal.) Two of the band’s members, bassist Dan Manian and keyboardist Jeff Manian, also run their own tech startup, and it was through them that the whole group was exposed to New York’s “Silicon Alley” scene. The band’s past music has taken inspiration from, and riffed on, work culture, with a sensibility landing somewhere in between Office Space and Wall Street. (See their performance of “Your Working Boy” below.) So it was almost a natural evolution to turn their creative focus to the defining industry of our time.

Corporate music, sometimes designed as an advertising campaign and sometimes aimed at boosting employee morale, is a well-established, if much-maligned, form of art. In the 1970s, Union Pacific railroad extolled itself in a folksy tune: “We’re a great big rollin’ railroad, one that ev’rybody knows / We were born of gold and silver spikes, a hundred years ago.” Law firm Nixon Peabody, though it insisted to reporters that it was not a theme song, once commissioned a gospel-pop anthem to celebrate its status on Fortune’s “Best Companies to Work For” list. (Sample lyric: “Yeah, yeah, yeah / It’s all about the team / It’s all about respect / It all revolves around integrity.”)

And the tech industry has its own rich musical history. In the 1930s, IBM published an entire songbook, which included a “rally song,” packed with lines like, “Our products now are known, in every zone / Our reputation sparkles like a gem!” In the wake of the last dot com boom, lyrics exalting firms such as Silicon Graphics made the rounds (“Peer to peer, have no fear / Get data in and out of here”). And in 2007, the attendees at Salesforce’s developer conference enjoyed a 90s-style rap entitled “The Dev Life,” in which such rhymes as “Cut my teeth on Java / learned it from my mama” are spit.

Mobile Steam Unit’s earlier work about life in business — perhaps best summed up by the line “Oh, I got to get out! / I’m in a cab to a steakhouse!” — is partly inspired by Huntington’s time working in government and in finance. The music is supposed to get a laugh but it is also earnestly melancholy, designed to provide catharsis to anyone who has experienced the dark underbelly of a high-power job.

When Mobile Steam Unit landed the first of two Music for Business gigs playing for Slack, the band took the initiative and wrote a song called “Inbox Detox.” (Slack did not commission the song but a spokesperson says both of the band’s performances were “well received.”) Though a decidedly upbeat funk tune, “Inbox Detox” is also operating on multiple levels. It takes jabs at bits of the culture: inboxes overflowing with tedious emails, co-workers with grain allergies, subject lines like “Connecting two good people.” But it also lauds Slack’s mission to streamline communication at the office, with the kind of unironic pep that a paying client might expect — and that has made other corporate ditties the butt of jokes in the past.

“This project is very heavy on the dualism,” says Huntington, who sports a haircut that exists somewhere between a mohawk and a man bun. They’re not out to “jeer” at tech companies, he says, even if they compose musical critiques of texting on their own time. “There’s room to celebrate the utility there,” he says, while on the phone outside a co-working space in New York, “but at the same time take a larger examination of the place these companies have in society.” (During the call, he noted that he has become an ardent user of Slack since doing the first gig last December.)

It’s a tough line to walk, but it’s also reminiscent of the cognitive dissonance many Americans experience when considering the tech industry. While a Pew poll found that Americans feel tech companies haven’t anticipated the negative consequences their inventions might have, they also say that those tools have had a net positive effect on their own lives. It is arguably a part of the economy that deserves to be both venerated and ridiculed. And the industry proves each year that it is game to do just that at a San Francisco celebration known as the Crunchies, at which comedians like Chelsea Peretti roast tech culture in between presenters doling out awards.

The Music for Business venture may find a market by capitalizing on the sector’s predilection for team-building exercises. Commissioning a song may seem like one more example of tech excess, but it hardly stands out on the list of things that tech companies have done to cultivate bonds among employees, from paying for them to work abroad for a month to holding meetings on seven-person tricycles to sending workers out in the streets to tag walls with corporate graffiti. “This is less than what you would pay for a foosball table,” Brad Lande-Shannon, a marketing executive at Culture Amp, says of hiring the band.

The Culture Amp theme song has proved a “bonding cultural artifact” for the team, he says. On the one hand, it did feel like they were living out an episode of Silicon Valley as the band took the stage to harmonize the company’s mission. “There’s a bit of poking fun at ourselves,” he says. But employees also loved it and felt like it celebrated their work. “I recommend that everybody go out and get yourself a song,” Culture Amp senior people scientist Craig Forman says in an email. The band incorporated terms that the company’s CEO uses in talks about the company’s mission, and the hook, “building culture from the insiiiights,” has become something of an inside joke.

After the conference was over, the members of Mobile Steam Unit went to play an encore performance at the company’s office. At one point, the equipment malfunctioned, but by that time everyone already knew the words, and the whole group sang the theme song a capella together. Parties involved describe it as jubilant. The only thing missing, Lande-Shannon says, was Zippo lighters.

“No one is still sure, is it ironic, is it totally earnest?” Huntington says. “There is a shred of mystery here.” 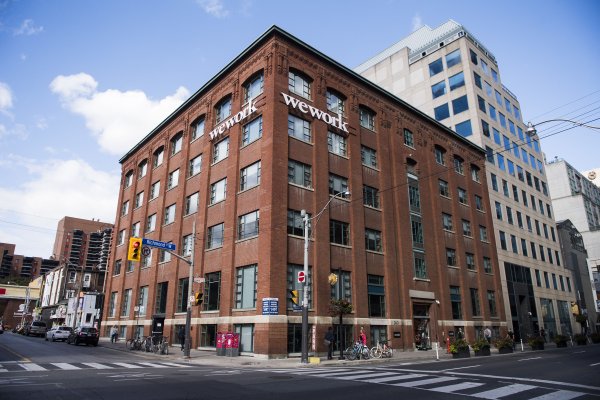 WeWork Will No Longer Let Employees Expense Any Kind of Meat
Next Up: Editor's Pick