Thousands of people will fill Brooklyn’s Barclays Center on July 27 and July 28, but not for basketball, not for hockey and not for a concert. They’ll be there for the Grand Finals of the Overwatch League, an e-sports league video game developer Blizzard Entertainment runs with its popular team-based, first-person shooter, Overwatch.

The sold-out finals will mark an end to the Overwatch League’s first season, with teams from Philadelphia and London (city-based teams are a league hallmark) set to compete for $1.4 million in prizes. Matches will be broadcast live on ESPN and Disney XD, marking the first time e-sports have been broadcast live on ESPN’s main channel in primetime, Blizzard says.

Ahead of the big event, TIME sat down with Blizzard Entertainment President and CEO Michael Morhaime to talk about the tournament, Overwatch, and the gaming industry more broadly.

The following questions and answers have been lightly edited for length and clarity.

What do you think about e-sports in terms of its cultural moment right now? It feels like it’s just on the cusp of going mainstream.

Gaming is mainstream now. That has been a shift. If you go back 20 years ago, gaming wasn’t [mainstream], really, outside of a few places in the world, South Korea being one of them. But there’s been a gradual movement of the popularity of gaming more and more into the mainstream.

It’s as big as other forms of entertainment, and so I think it’s only natural that organized competitive play would follow. I think people are interested in watching what they know and what they care about, so as you have more people where gaming is a huge part of their life, they want to see what the top players in the world are able to do.

There’s been some controversy over inclusiveness and over players saying some things they shouldn’t. Did that surprise you at all, and how do you react to that?

We want gaming and e-sports to be something that is welcoming and appropriate for everybody who wants to come and watch. I am surprised by the level of toxicity sometimes that exists online, especially where people can say things anonymously. That is something that we’re spending a lot of time talking about at Blizzard, and I think there are some good ideas that will start to make an impact on reducing that.

For some of the players, all of a sudden being in a spotlight like this, that’s probably something that surprised them. But they have to come to terms that they are public figures now, and are representing more than just themselves, and so they have to take that responsibility seriously if they want to be part of a professional organization.

We’re going through some growing pains as an industry right now, but I think it’s necessary and important.

It’s important to be inclusive for business reasons, too — you want to sell games to female players, to LGBTQ players.

We do, for sure. But even more than the business reasons … what kind of world do we want to live in? What kind of world do we want our kids to grow up in? And when you think about expanding gaming to a larger audience, you think about people going online and having their first experience, and what should that experience be? You don’t want them exposed to this sort of stuff.

Overwatch League has taken steps towards making sure players are well-compensated in terms of pay, benefits and so on. Why is that important to you?

It’s really important that the top players, we provide them with stability so that they can focus on being the best. If you look at traditional sports, this is something that traditional sports does very well. You get signed to a team and you have a lot of things that are just like a regular job, where you’re focusing on being the best that you can be. So having a minimum salary, having health benefits, having this good environment [helps] to focus on building teamwork with the team.

Has there ever been a challenge where maybe something feels right for the competitive side of Overwatch but doesn’t feel right for the average casual player?

That’s something we deal with in all of our games that are e-sports. It’s critical that at the professional level, the game is well-balanced. And we also have to look at all levels of play, and how the decisions that we’re making impact those levels as well. So it’s definitely a balancing act, but it’s something that the design team is constantly thinking about.

Do you play often?

Have you tried to play against some of these players?

That wouldn’t even be entertaining to watch. But you know, one of the awesome things that I love about Overwatch is, regardless of your skill level, you can go in there and have a really fun experience. And I do. I’m able to go in there, and I’m able to win matches, and I’m able to play with my nephew, who is quite a bit younger than me, and we can go in there and just have a great time. And I’m not very good at the game, so it’s pretty awesome that I can have such a great time playing and walk away not feeling that I’m really as bad at the game as I probably am, if you were to match me with people who really knew what they were doing. 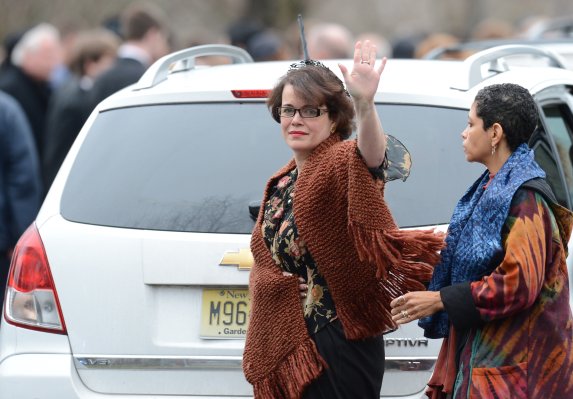 Sandy Hook Victim's Parents Ask Mark Zuckerberg to Stop the 'Proliferation of Hate' on Facebook
Next Up: Editor's Pick