As a lawmaker from a district with parts backing Donald Trump, Ohio Rep. Tim Ryan is at the center of a group of Democrats who are thinking hard about the party’s future.

So when in short order he recently joined a Medicare for All caucus, proposed legalizing recreational marijuana and put forward a job training bill, many Democrats took notice.

Some have speculated that the policy shifts are a sign that he may be running for higher office, potentially even president. Adding fuel to the speculation: He recently hired Pete D’Allesandro, one of Bernie Sanders’ top Iowa advisers, and will be speaking at the Iowa Wing Ding, a fundraiser often viewed as a key event for presidential hopefuls.

In an interview with TIME, Ryan downplayed that talk with the usual hand-waving.

“I’m not gonna go past 2018,” he said. “We’ll have that conversation right after the midterms.”

With Democratic chances of retaking the House of Representatives improving, Ryan could also be in position to run for a leadership role there; in 2016, he mounted an unsuccessful challenge to House Minority Leader Nancy Pelosi, and recently told Politico he was considering doing so again should should Democrats retake the chamber.

Two Democrats have already thrown their hat into the ring for the position of party caucus chairman, which will be up for grabs since 28-year-old Democratic socialist Alexandria Ocasio-Cortez defeated the current chairman, Rep. Joe Crowley in the New York primary earlier this month. (It was after Crowley’s defeat that Ryan said he would not close the door on challenging Pelosi).

Ryan, who confirmed to TIME that he is still considering challenging Pelosi, also took issues with an interview she gave to Rolling Stone in which she said he and Rep. Seth Moulton’s calls for new party leadership were “inconsequential.”

“I think that’s really inappropriate to take personal shots at members of your own caucus” he said. “Really, saying who is consequential and who is not consequential is part of the main problem in the Democratic brand right now. These people think we’ve forgotten them. And for the leader of the party to say that about her own members is really a problem.”

Ryan has not always been in lockstep with the party. He was pro-life until switching his position in 2015. The National Rifle Association gave him an “A” rating early in his career, although he has since donated any funds he received to gun safety groups. And he broke with his party last year and endorsed corporate tax cuts, although he ultimately voted against the tax reform bill.

But he told TIME that the recent policy moves on health care and marijuana were not an effort to curry favor with the progressive wing of the party.

“I’ve been supporting the Medicare for All legislation way before it was cool to be for Medicare for All,” he said, noting that he had sponsored legislation on this initiative since 2007. And his decision to support marijuana legalization, he said, stemmed from the racial discrepency in incarceration, and the loss of potential tax revenue, which he said could do wonders for his home state, which has been ravaged by opioid overdoses.

“We’re wasting a lot of money we’re currently spending to put people in jail,” he said. “[Legalization] would also give us more tax revenue to take care of the opioid addiction.”

While he was rolling out these positions, Ryan was a featured speaker at the Opportunity 2020 conference earlier this month in Ohio, a conference organized by the centrist think tank Third Way that convened moderate Democrats to strategize about the future.

Democratic strategists said his recent moves indicate how moderates contemplating a future within the party are trying to strike a balance within its competing factions.

“He’s moving very much in both directions at once,” said John Russo, former co-director of the Center for Working-Class Studies at Youngstown State University, which is in Ryan’s district. “I think what he’s trying to do is take a little bit of Bernie and a little bit of Hillary … its part of positioning himself, either for a presidential run or a run at Pelosi again.”

The original version of this story misstated the results in Rep. Tim Ryan’s district during the 2016 presidential election. Two of the five counties in Ryan’s district voted for Trump, all of the districts did not vote for Trump. 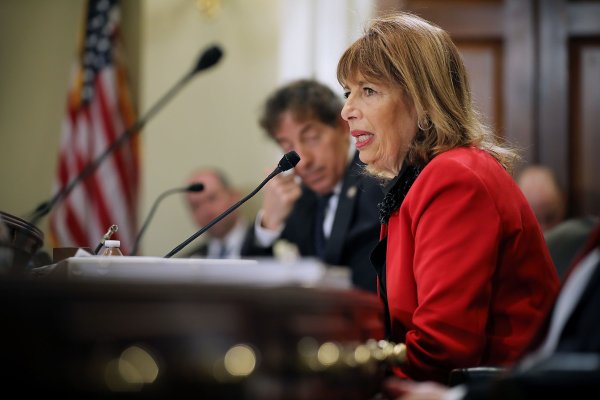 Bill Would Ban Sex Between Law Enforcement, Those in Custody
Next Up: Editor's Pick