How Southern Food Has Finally Embraced Its Multicultural Soul

Oscar Diaz of the Cortez in Raleigh, N.C., which has become an exemplar of new Southern cuisine
Mike Belleme for TIME
Ideas
By Gustavo Arellano

The signs of a Nuevo South are impossible to miss at Jose and Sons, a buzzy restaurant inside a former train depot in downtown Raleigh, N.C. On a window on the side of a door, Hola Y’all flows in a jolly green script, while Hecho en Raleigh snakes across the bar in big block letters.

Who they are is emblematic of a titanic shift in how the South views itself–and how Americans are finally beginning to view the South. Over the past 30 years, the most racially fraught region of the U.S. has been reshaped by an influx of immigrants. Of the 10 states with the fastest-growing Latino populations between 2000 and 2011, nine were in el Sur. The South’s Asian-American population, meanwhile, totaled 3.8 million in 2010–up 69% since 2000–the largest increase of any minority group. Many of these new arrivals mitigated the tensions that appeared in the best way they knew: through food.

In the process, immigrants and their American-born sons and daughters have helped transform the perception of Southern cuisine into something beyond biscuits and gravy and mint juleps. Southern food is now kebabs in Nashville’s Little Kurdistan, one of the largest enclaves of Kurds in the U.S. It’s Greek diners across Alabama and Ethiopian restaurants standing next to Salvadoran pupuserías in Virginia. In rural towns that have seen their populations decline, it’s the Chinese or Mexican restaurant that took over former greasy spoons while preserving them as de facto community centers. And in reborn urban centers, it’s the Michelin-approved fine-dining restaurants where chefs have fused techniques from India, Laos and Nigeria with the staples of the Southern canon.

These developments may not mesh with the moonlight-and-magnolias stereotype, but they are far more reflective of the Southern table as it’s actually laid. “Immigrants are adding to what the South is,” says Jose and Sons chef Oscar Diaz. “There’s this beautiful painting, and we’re adding more beautiful colors. Because it’s not a finished piece.”

The dirty secret about Southern food that many of its most prominent champions never bothered to share with the rest of the country is that it has been multicultural from the start. Corn was the first Latino staple to cross the Southern border. Spanish conquistadores brought the low-and-slow tradition of barbecue, which they took from the Caribbean natives they killed on their path to the New World. Enslaved Africans used food to resist the eradication of their culture and created the foundation of Southern cuisine, both through their labor and recipes.

Pimento cheese tostones and other dishes at the Cortez, one of a number of new culture-crossing restaurants in the South
Mike Belleme for TIME

Some of the most celebrated subgenres of Southern cooking–Cajun and Creole in Louisiana, the low-country cooking of the South Carolina and Georgia coast–came from ethnic groups that found succor in their cuisine from a hostile mainstream society. Throughout the 20th century, small groups of immigrants from Europe, Asia and Latin America rewarded the South with new dishes–muffuletta sandwiches in New Orleans, hot tamales in the Mississippi Delta, yok-a-mein in Virginia–that became regional delights.

All of this rich history, however, tended to get whitewashed in the national conversation about Southern food. “Food media always found the white celebrity to talk Southern food,” says the soft-spoken Jose and Sons owner Ibarra. “Now you have a wider representation. It’s great to be quoted, [rather] than have someone talk about your food for you.”

Ibarra’s story exemplifies the evolution of Southern food. He was born in Southern California but moved as a 7-year-old to North Carolina after his immigrant father and uncle got an opportunity to open a Mexican restaurant in the Raleigh-Durham area. The Ibarras were from a region in the Mexican state of Jalisco that found its American Dream through dining dynasties. Families opened restaurant chains throughout the South to the point that people from the village of San José de la Paz own more than 540 restaurants alone. “I can eat across the South for free by just visiting my cousins’ restaurants,” Ibarra says with a laugh.

Ibarra’s family opened their restaurant at a time when immigrant entrepreneurs had to both downplay and overstate their ethnicity. The decor was all sarapes and piñatas, but the food was watered down to attract customers. To this day, one of the most popular Mexican dishes across the South is ACP (arroz con pollo), a Latin American classic morphed into something most Latinos wouldn’t recognize: rice and chopped chicken drowned in a cheese sauce that usually tastes of a cross between Velveeta and paste.

“That was the reference point to an entire genre of food,” Diaz says. “But people are becoming more educated about food, little by little.”

Ibarra opened Jose and Sons, named for his father and brothers, in 2013. Helping him was Diaz, who was raised in Chicago and initially tried to cook straightforward Mexican food in the South. The 36-year-old classically trained chef re-examined his approach after too many customers said he wasn’t doing their queso dip right, a dish Diaz had never heard of until he moved to Raleigh.

“So instead of me being all bitter about people saying, ‘You can’t do this and that,’ I decided that I was going to put my fingerprint on something,” Diaz says. “So I started to mix grits with masa [the corn dough that serves as the base for tortillas and tamales]. It got us thinking.”

Ibarra and Diaz found so much success with Jose and Sons that they were able to open the Cortez, an ambitious, seafood-focused restaurant, late last year. They now see themselves as ambassadors for their prismatic view of the South. “I’m repping not just the restaurant; I’m repping Raleigh,” Diaz says. “I’m repping Latino culture and American culture. I’m repping the South.”

In this way, immigration is not just introducing new cuisines to the South; it’s also redefining how Southern food spreads far beyond the Mason-Dixon line. Consider Vietnamese-Cajun crawfish houses. They’re roughly the same as at any spot on the bayou: butcher paper on tables; bibs around necks; and smiling, messy faces. But Vietnamese-American chefs use Asian herbs like lemongrass and Thai basil instead of Old Bay and Zatarain’s, and drown the mudbugs in flavored, hot-sauce-spiked butter.

The distinctive take on a regional delicacy has found an audience outside the traditional precincts. Food writer Mai Pham remembers having to drive 30 minutes to try such a spot when she moved to Houston in 2001. A few years later, she returned to Orange County in Southern California and found a Viet-Cajun restaurant just like the ones in Texas.

Grilled swordfish with salsa verde at the Cortez, where chefs prepare seafood with Mexican techniques
Mike Belleme for TIME

Now Viet-Cajun crawfish houses are all over the U.S., from Los Angeles to New York City. And there’s something poetic in Vietnamese Americans’ serving as ambassadors to the South through seafood. Many refugees who settled along the Gulf Coast in the 1970s went into the crawfish and shrimp trade, only to meet fierce resistance from white fishermen who accused them of stealing their jobs.

“The importance of the immigrant contribution cannot be overstated and has been hugely influential in dispelling parochial Southern views,” Pham says. “The fact that we’ve been able to take a traditionally Southern dish and make it ours–and to have it recognized as its own genre and specialty–we’ve now contributed to the genesis of an emerging culinary tradition.”

Thanks to the efforts of these boundary-crossing chefs and eaters, the New South is everywhere. Nigerian-born chef Tunde Wey holds pop-up dinners from New Orleans to Memphis that challenge Southerners on their privilege; in one headline-making case, Wey told white customers they could pay $12 for their lunch or the menu price of $30, while nonwhite diners paid $12 and could get the extra $18 from any whites who paid $30, all as a lesson on the racial wealth gap.

Signs in Spanish line the break room at Kentucky Cooperage in Lebanon, Ky., one of the largest independent makers of whiskey barrels in the U.S. At Snackbar in Oxford, Miss., executive chef Vishwesh Bhatt takes Southern standards like hush puppies and okra and gives them an Indian spin. Elegant takes on aguachile, a ferocious bowl of raw shrimp marinated in chilled lime juice and spiked with serrano salsa, have appeared on menus in high-end restaurants from Charleston to Chattanooga.

Then there’s Louisville, home to beloved bourbon makers and the namesake Slugger baseball bat. Con Huevos made history this year as the first Mexican breakfast spot to have its chef nominated for a prestigious James Beard Award. Not far away is 610 Magnolia, where former Top Chef star Edward Lee has ridden his Korean-Southern dishes to 10 straight James Beard nominations as Best Chef in the Southeast.

No area of the South better represents this than Buford Highway, which crosses multiple small cities northeast of Atlanta. The hundreds of restaurants representing dozens of immigrant traditions, all mixed together like a good gumbo, inspired Anthony Bourdain to describe it as a “veritable stairway to heaven.”

As recently as 1993, the vice mayor of tiny Doraville rejected the idea of an “International Village” that would celebrate Buford Highway’s immigrants. “That’s just not our way of life here,” Lamar Lang told the Atlanta Journal-Constitution. “Why would we want to attract more immigrants when we got all we want?”

Today Doraville officials collaborate with We Love BuHi, a nonprofit that seeks to celebrate Buford Highway’s multiculturalism while trying to ensure that it remains affordable for immigrants. Marian Liou, a Southern California native who moved to Atlanta in 2003 to work as a corporate lawyer, began the effort after an unpleasant encounter at her new job.

“One of the senior partners’ first questions to me was, ‘Did your ancestors build the Transcontinental Railroad?'” Liuo says. “It took me aback. I’ve never received a question like that in my life.”

But Liou found a warmer reception in the Bangladeshi restaurants and Chinese banquet halls of Buford Highway, and she sees those neighborhood spots as key to charting the future of her adopted home. “It’s wonderful that immigrant food is shaping and molding this constantly shifting conversation and understanding about the South,” she says. “It’s not free from conflict. But we’re ready.”

Arellano is a columnist for Gravy, the magazine of the Southern Foodways Alliance, and the author of Taco USA: How Mexican Food Conquered America 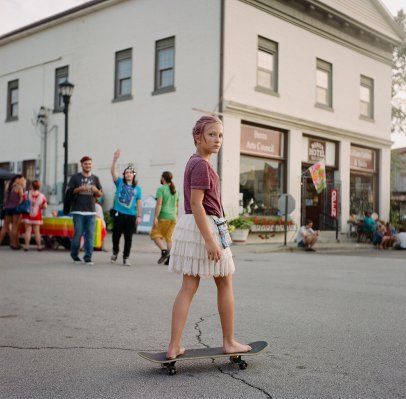 The South Could Mend America’s Divide—If It Reckons With Its Past
Next Up: Editor's Pick