Memories From the South: Fried Chicken on Race Day

On race days we were slammed at Holly Farms Fried Chicken, the fast-food restaurant in North Wilkesboro, N.C., where I started working on my 16th birthday. Usually business was painfully slow, and I spent long, hot evenings after school in my brown and red polyester uniform, the days lapping into each other, few distinguishable from the next. I cleaned the store (“You got time to lean, you got time to clean,” the manager would say), talked to friends in the dining room and on the phone, watched cars through the floor-to-ceiling windows like a goldfish in a bowl. Hours of standing around, languishing in the dining room waiting for something to happen, something momentous and exciting that would wake up the seemingly endless turning of the day. At the time, I was the only black person employed at my store. I didn’t think about that fact in the late ’80s. Then it was normal for there to be only one black face in any employment crowd. Even in fast food. Even in the South, which many African Americans call home.

Race days, the busiest days of the year, were different. Customers lined up at 6 a.m., when the doors opened, one after another on a conveyor belt, and we handed them buckets of chicken and our beloved crispy taters. Those Saturday mornings we worked without a break. Who had time for breaks? There would be time enough to breathe, to think, to sit down when every patron was in his or her car, travel trailer or truck and was headed to the North Wilkesboro Speedway. Racing started in Wilkes County in the late ’40s and ended in 1996, with a brief revival about a decade later. Even if you don’t know about racing (and I don’t), you will have heard of NASCAR, the sport created by moonshiners to prove who was the fastest. Every other day of the year, Kentucky Fried Chicken seemed like the most popular fast-food chicken in town, but Holly Farms was the official race sponsor. Besides, we opened early, and KFC didn’t. You had to have chicken for race day–not sandwiches, not burgers, but fried chicken, food that feels casual but like a celebration at the same time.

Thousands came from all over the town and the county to the speedway to watch the cars zoom by and to eat and drink and drink. I have this on good authority, but I never went to a race. I don’t know any black people who went. No one I ever knew talked about being in the stands and certainly not about driving. On race day, not a single customer that carried out those hundreds of buckets of chicken and taters was obviously a person of color. And if you are black, you remember black people. North Wilkesboro is not and was not Andy Griffith’s Mayberry; you don’t know every passerby. But seeing another brown face signals to you that you are welcome, or at the very least you are not in imminent danger.

The speedway is gone now. Not demolished but rusting and not in use. It would take a fortune to revive. Not many people in towns where most worked on factory lines in chicken processing or furniture building have a fortune. Holly Farms was bought out by Tyson, the restaurant business closed, and the buildings no longer exist. I am no longer young. But the memory of all that lingers. In every life you leave your loved ones behind, through death, by omission and sometimes because the chasm between them and you is too great. You leave your town by choice or by the inevitable unspooling of life. But at some point you realize that you loved some parts of it. Even when it is flawed. You can even love a failing chicken restaurant and a speedway you never went to. You were young. When those days come to mind, you will want to call your people, even the ones who are no longer there or anywhere. You will want to declare: I have loved you through time and space. It is hard to be us. It is hard to be anyone. You will want to tell them, I forgive, I forgive you everything. 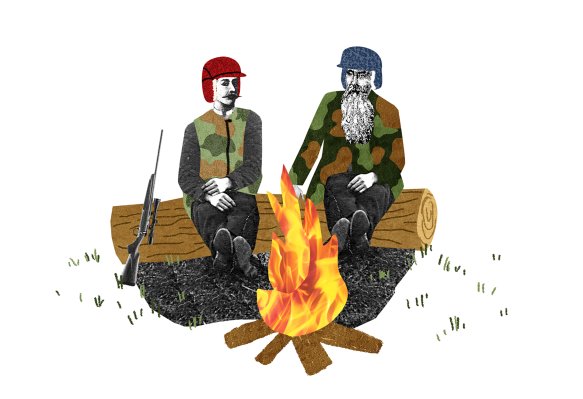 Memories From the South: Hunting Camp
Next Up: Editor's Pick