In 2016, I banned the phrase “bikini body” from the pages of Women’s Health. I was editor-in-chief at the time, and felt the phrase wrongly implied that you have to be a certain size to wear a bikini. Later that year, Sports Illustrated put Ashley Graham on its cover and was lauded for featuring someone who actually represents American women’s sizes. This May, The Business of Fashion featured Sinéad Burke, a writer and academic who has achondroplasia, on its cover in a Burberry trench with the cover line “The Age of Influence.” And Jillian Mercado, a model who has muscular dystrophy and uses a wheelchair, has recently starred in ads for Diesel and Nordstrom and in a video for Glamour.

On social media, the clamor to celebrate women of all shapes, sizes and unique attributes is even louder. Size-22 model Tess Holliday has popularized the hashtag #EffYourBeautyStandards, and model Winnie Harlow, who has vitiligo, is one of Instagram’s It girls. Hilary Duff received uproarious praise for posting a pic of her rear end on Instagram. Fitness influencers are endlessly promoting “strong” over “skinny.”

Model Ashley Graham on the cover of the Sports Illustrated Swimsuit issue in 2016.

If one were to judge by media, it certainly feels like diverse bodies are finally being lauded for simply being. As a recent lifestyle site summed it up: “Brown bodies, hairy bodies, big bodies, tattooed bodies, little bodies — all bodies are worthy of love and representation.”

All bodies except aging bodies.

The women I’ve mentioned above share one thing in common: They’re 33 or younger. Sure, there’s Baddie Winkle, the 90-year-old Instagram star who wears Tweety-bird suits for her 3.4 million fans, and Iris Apfel, the 96-year-old fashion icon. After the 2018 Academy Awards, The Cut even declared: “People Over 70 Ruled the Oscars Red Carpet.” Indeed, the body positive movement seems to refuel again around this age.

But for the women of Generation X — those of us born between millennials and baby boomers, now in our late 30s to early 50s — the loud roar of body positivity is more like a whisper. It’s like we don’t exist.

I’m 43 years old with noticeable spider veins, but I’m not just projecting. As Amy Pence-Brown — a 42-year-old “body image activist pretty steeped in the movement” — puts it, “most of the others are really young, in their 20s.” Body image coach Summer Innanen, 39, saw such a dearth of representation that she started an #agepo campaign, asking her clients — most between 35 and 50 — to post pictures of themselves using the hashtag. “I thought, if we could almost crowd-source it, they could be the change they want to see,” says Innanen, who hosts the body positivity podcast Fearless Rebelle Radio. “There isn’t a lot of talk in body positivity around the problem with the way women are erased when they reach a certain age.” Proof: Currently, there are approximately 14,520 posts with the hashtag #agepo or #agepositive, versus 8.3 million posts with the hashtag #bodypositivity or #bodypositive. A scroll through the latter indeed reveals women who appear to be mostly in their 20s.

Posts shown in the #bodypositivity and #agepositive hashtags on Instagram.

Most clothing brands echo social media here. In 2017, when Antonia Furlong took over the London bikini brand Mermaid In England, she was a 39-year-old mother of two grappling with her own changing body, and considering using slightly older non-models in the company’s campaigns. To see what approach her competitors were taking, she scoured social media. “I couldn’t find anyone over the age of late 20s [in ads],” she says.

Although studies on body image mostly focus on college or teenage women, a 2015 review of the existing research on older women showed that, just like their younger counterparts, they suffer from the same negative feelings about their bodies when confronted with standards that promote thinness as ideal. Only, in mid-life, they’re up against a second impossible “ideal”: a taut, wrinkle-free, youthful one, causing this cohort to engage in “old talk” (conversation that belittles the natural things that happen as we age), according to a 2013 study published in the Journal of Eating Disorders. Another study from 2004, published in the journal Body Image, found that “body dissatisfaction was remarkably stable across the adult life span for women.”

First, there’s the weight factor. Each decade, basal metabolic rate slows about 1–2%, and as we hit our 40s, our levels of estrogen, progesterone and human growth hormone drop, meaning our metabolism slows even further and #tacotuesday hits our hips faster. Many of us have birthed humans by this age, an event that often changes the shape of our midsections. Skin tags start to appear. Varicose veins enter our vocabulary. Our boobs lose their perk.

All of these physical shifts are compounded by the life experiences common of this era: buying a home, worrying about 401(k)s, raising kids, taking care of elderly parents, solidifying or reinventing a career. These factors themselves can affect body image and lead to “aging anxiety,” the study from 2015 also found.

Hollywood plays its part. “Positive representations of older women in popular media can only help promote more positive views. But many of the older women in Hollywood appear much younger than their actual age, which can reinforce the pressure on women to strive to appear youthful,” says David Frederick, an assistant professor in health psychology in the Crean School of Health Sciences at Chapman University, who studies body image.

And just like celebrities, social media influencers are rewarded for their agelessness, racking up likes, followers and advertising contracts. So culturally prized are smooth skin and sag-free parts, it’s hard not to get sucked into the youth vortex, even for those who have fought against other forms of body stigma. “I’m a person who’s been coaching and working in body acceptance for over five years now, but when I saw my first gray hairs, I was like, whoa,” says Ivy Felicia, a certified holistic wellness coach who’s turning 40 this October. “I’ve found a way to make peace with so many other things — living in a larger body, living with a chronic illness — and now there’s this new thing: age.”

New? Aging? Well, yeah, particularly for a generation brought up in a youth-obsessed society, where looking your age is, as Pence-Brown says, a “radical notion.” Many have already mentally stereotyped us as a “soccer mom” in her high-waisted (not the cool kind) and acid-washed (also not the cool kind) jeans. “We’re supposed to be frumpy, non-sexual beings striving to get our ‘bodies back’ after children,” says Pence-Brown, who rose to some fame in 2015 when she posted a video of herself blindfolded in a bikini and asked strangers to draw a heart on her body if they’ve ever struggled with self-esteem. “I think we are a demographic that people, and the media, don’t really know what to do with. We’re no longer young, but we’re not really old yet — many of us are sort of at a tipping point.”

We can tip towards more self-acceptance or more self-loathing, which is why it’s so important for us to see realistic, representative women, not just 20-somethings preaching that we should love every part of our body every second of the day.

Where, then, are our peers?

“The body positivity movement was originally intended to empower fat, and then marginalized, bodies,” says Sarah Sapora, who wears a size 18 and is one of the few popular body positivity Instagrammers who’s turning 40 this year. “But these days, the people we see represented are overwhelmingly in socially acceptable sizes — under size 14 or 16 — who are hourglass and under age 25.”

It was this scarcity of 30- and 40-somethings that ramped up Sapora’s involvement in the movement, when she began sharing her personal story on Instagram in 2016. “I was 37 and felt like nobody was talking to me. I was 350 pounds and really miserable,” she says. “Self-love and body positivity are so important as we age, as our bodies change, but nobody was having that conversation. So I did.” As she posted photos of herself in swimwear and sports bras with frank captions about her struggles with confidence, her fan base started to grow.

A model poses in a Knix fashion show.
Image Courtesy of Knix

Some brands are trying to figure out how to embrace age in an empowering way. Knix, an intimates company, has customers (some models, some not) ages 21–71, including five between 38 and 50, who show off their products in ads. Their Instagram account features women of various breast sizes proudly displaying their stretch marks and non-flat stomachs. Furlong, of the bikini brand Mermaid in England, also decided to feature women mostly in their mid-30s to 50s — she scouted them on Facebook — for the brand’s latest international ad campaign. And swimwear brand Swimsuits For All includes women of all ages in their ads, too. “Over 40 is an underserved market. She’s a year-round spender,” says Nicole Iasiello, the company’s general manager. Sixty-four percent of Swimsuits For All’s sales come from the over-40 category, making a financial case for other brands to pay this demo more attention.

To wit, though Gen X comprises approximately 20% of America’s population, it holds 31% of its spending power. We shell out more than millennials on health care and as much as millennials on clothes and entertainment, according to the 2015 Bureau of Labor Statistics’ Consumer Expenditure Survey. We Xers drop almost double what millennials do on “apparel and services”; we also purchase more products from brands we follow on social media than millennials, according to the Q1 2017 Sprout Social Index.

In other words: We, the Gen X women of America, have the will and the means to support brands that support us. And a few brands do, but we’ve hardly reached parity. Sapora, with 160,000 followers on Instagram, has the highest fan base I’ve seen for a Gen X social media body influencer. In contrast, Tess Holliday, 33, has 1.6 million followers and a contract with a top modeling agency. While Sapora gets sponsorship work from smaller brands, she rarely gets approached by big ones. “They’re 100% missing out on connecting with a real demographic of women who are looking to be talked to with relatable authenticity,” Sapora says.

Until more brands get involved, we can start making change ourselves. Sapora, for one, is now proactively filling her social feeds with actresses who are over 40, like Cameron Diaz and Drew Barrymore. “At this point in my life, I want my understanding of my own beauty to adjust,” she says. “I can still be feminine and sensual, but I want to find role models that I can relate to.”

So do I. This summer, spurred by my frustration with the lack of age positivity out there, I’m heading back to the University of Missouri-Columbia in my hometown in hopes of working with a researcher there, studying the experiences of Gen X women’s body image and of having their peers realistically represented in the body positivity movement. I hope the results will influence women, companies and the general public to affirm one very basic concept: Change, in bodies as in life, is good. 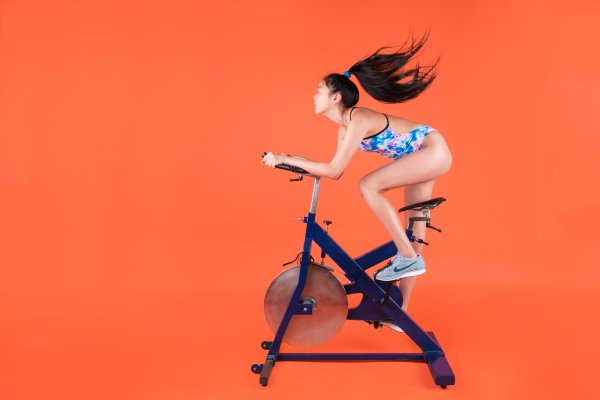 How to Feel Thinner in 30 Minutes
Next Up: Editor's Pick