Stephen Colbert Made an Ad for 'Slightly Radioactive' Wine

In 2011, an earthquake and tsunami in Japan nuclear meltdown at the Fukushima Daiichi plant resulting in 16,000 deaths, none of which is a laughing matter. Now, according to a recent study, the radiation from the Fukushima plant has made its way into California wine and Stephen Colbert managed to turn it into a parody ad.

On The Late Show on Tuesday, Colbert introduced an ad campaign for California‘s “nuclear wine” and you’ll be forgiven for laughing. The ad starts with a news story about the traces of the disaster making an appearance in California vintages. It then launches into an ad for the fictional Santa Rosa Estate Vineyards, a winery known for its Chardonnay “which can be characterized as crisp, light bodied, and slightly radioactive.” Not only does the wine “pair well with fish and pasta” but it will give you “mutant powers beyond human comprehension.”

The faux ad serves as a good reminder that if you don’t laugh, you’ll cry. Not that so-called radioactive wine is anything to cry about. As PBS notes, though, the trace levels of radiation in California wine is not nearly as dire as it sounds, similar to how the levels of radiation found in fish post-Fukushima reportedly pose minimal of a risk to human. 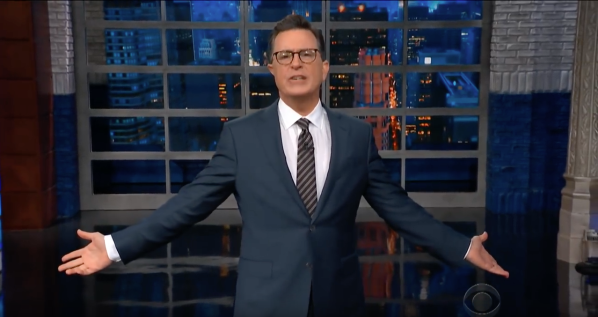 Stephen Colbert Commemorates the Shutdown of Ivanka Trump's Fashion Brand With Some Scathing Jabs
Next Up: Editor's Pick