President Donald Trump’s star on the Hollywood Walk of Fame was destroyed Wednesday morning by a pickaxe.

Officers responded to a call at the star’s location on Hollywood Boulevard and Highland Avenue around 3:30 a.m., Los Angeles Police Department spokesperson Ray Brown told TIME. They found that Trump’s star had been destroyed with a pickaxe.

Photos from the scene from reporters and witnesses show the damaged Trump star with a pickaxe lying alongside a pile of rubble. The star appears to be gouged out, leaving a hole.

NBCLA reporter Johnathan Gonzalez tweeted that, according to witnesses, a man pulled the pickaxe out of a guitar case when he walked up to the star.

Gonzalez said the man called the police to report the incident but left before officers arrived.

The LAPD did not immediately provide information about the suspect. It is unclear how much the damage to the star will cost.

It’s the second time Trump’s Hollywood Walk of Fame star has been destroyed. In 2016, police arrested James Otis, who smashed the star with a pickaxe and sledgehammer. Otis was put on probation for three years in February 2017 after he pleaded no contest to a felony vandalism charge. He was ordered to pay $4,400 for the damage and lawyer’s fees and sentenced to 20 days of community service, the Associated Press reported. 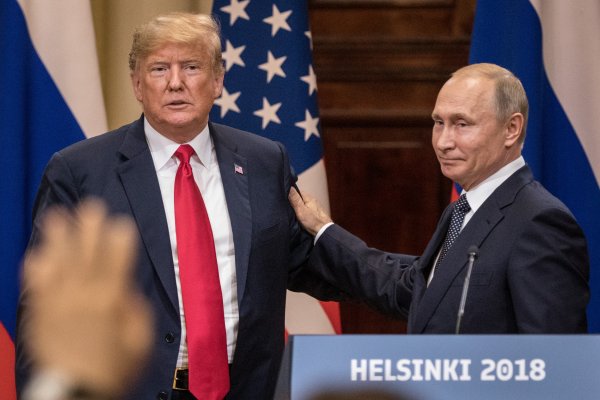 Voters Think Russia Has Compromising Info on Trump
Next Up: Editor's Pick