What Paul Manafort's Delay Tactics Show About the Case Against Him

Former Trump campaign head Paul Manafort won a small victory in court Monday when the judge in his Virginia criminal case delayed the trial a week.

Manafort is is facing over a dozen criminal charges in Virginia, accused of tax evasion and bank fraud among other things. In September, he will face separate but related criminal charges in D.C. on charges of money laundering and failing to register as a lobbyist for the pro-Russia Ukraine government. He has pleaded not guilty in both cases.

On Monday afternoon, U.S. District Judge T.S. Ellis III agreed to postpone the trial until next Tuesday, a shorter delay than Manafort’s lawyers had requested, but their first victory.

Manafort’s lawyers hoped to delay the trial until after the D.C. case in September, citing the difficulty of working with Manafort while he was in jail and the recent production of legal documents by the prosecution.

At the hearing today, Kevin Downing, Manafort’s lead attorney, argued that the team needed more time to pore over Mueller’s documents. He noted that he had received 120,000 new pages since July 6.

Legal experts say this is a pretty standard request for a defense team.

“It’s not uncommon for a defense attorney, especially in a complicated case of great significance like this, to try to have more time to prepare,” said Joshua Dressler, a law professor at Ohio State University.

Lisa Griffin, a professor at Duke’s law school, agreed. “It’s very, very common for trials to be continued, or delayed. … And sometimes it’s because one side claims the need to review discovery materials or evidence.”

Most of the documents in question are from the iPad, iPhone and laptops of Rick Gates, Manafort’s longtime partner, who pleaded guilty to financial fraud and lying to investigators earlier this year and agreed to cooperate with prosecutors. Manafort’s team also claimed that they had not yet seen an additional collection of around 20,000 documents from Manafort’s accounting firm, NKSFB.

Prosecutors argued that many of the Gates files are just printouts of digital images. “I’m just not sure what looking at pictures is going to do for their case,” said Uzo Asonye, a lawyer on Mueller’s team. Asonye also argued that Manafort already had access to the documents through his former law firm, Wilmer Cutler Pickering Hale and Dorr.

This is not the first time Manafort’s team has argued to delay or change the trial, in some way — in fact, it’s one of many failed past attempts. Both the Virginia and D.C. judges have rejected Manafort’s attempts to challenge the purview of Mueller’s investigation, to suppress evidence seized by authorities and to move his trial farther away from Washington.

“I think it’s the desperation strategy,” said Professor Jens David Ohlin, vice dean of Cornell Law School. “I think he doesn’t have a lot of options available to him, so his lawyers are doing whatever they can to score a win. From their perspective, that’s the only strategy they have. A lot of these are low probability arguments, but they’re doing the best they can.”

Earlier this summer, his team attempted to postpone the trial by arguing that Manafort’s imprisonment in a rural facility created logistical barriers for preparation — since he was located in Warsaw, more than 100 miles from D.C. When Ellis ordered that Manafort be moved closer to D.C., his attorneys backtracked, asking that their client remain at his current jail for “his safety,” among other reasons.

Ellis wrote that “it is surprising and confusing when the counsel identifies a problem and then opposes the most logical solution to that problem.”

Dressler called Manafort’s defensive strategy the “dartboard philosophy.” “You throw as many darts as the dartboard as you possibly can, make as many motions on everything that you can, in the hopes that one of them hits the bullseye, even when they’ve been failing in the past,” he said.

So why did they hit the target this time? Jeffrey Cramer, a former federal prosecutor who is currently the managing director at Berkeley Research Group, speculated that Ellis may be trying to “avoid an appellate issue.” If Manafort is ultimately convicted, his team could appeal it on the grounds that they weren’t prepared for the trial to start, he explained. “If you’re a court trial judge, you’re not looking for that kind of appellate issue when you could just give them a few weeks and probably neutralize it.”

However, some legal experts noted that it is can be unusual for defense teams with a client in custody to continue seeking delays, since it prolongs the time their client is in jail. In Manafort’s case, they believe his defense has adopted this strategy because the evidence against him is very strong.

“Manafort might want to delay because he’s hoping that either the political pressure on the Russia investigation or the Justice Department will ramp up and that will pose problems for the prosecution,” said Ohlin. “He might also be hoping for a pardon from the president, so he wants to keep delaying things and delaying things with the hope that Trump pardons him.”

A one-week delay isn’t even much of a victory for Manafort, experts note. The Virginia court has a reputation for being speedy — originally known as a “rocket docket,” according to Ohlin. The case will likely move quickly once it goes to trial. But for now, Manafort’s team will take what they can get.

“It’s a 70-year-old man who is looking at over a dozen years in jail if he’s convicted,” noted Cramer. “Nothing good is going to happen to Mr. Manafort if this case goes to trial now. You push it off and hope for something — hope for a pardon, hope that witnesses change their mind — who knows what you’re hoping for. But the corollary is certainly not something to look forward to, because it’s a pretty strong case, not just in documents but also in witnesses.” 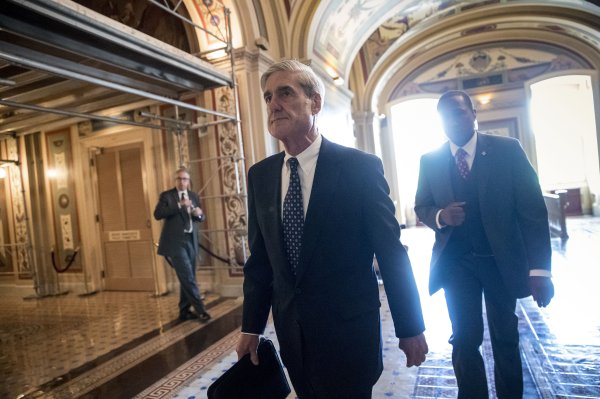 Washington's Newest Game: Guessing Who's Unnamed in Indictments
Next Up: Editor's Pick