For anyone else, the post would have been pretty innocuous — a couple receiving IV drips while lounging on plush leather chairs.

But for Olympic athletes, the act is a violation of strict U.S. Anti-Doping (USADA) policies that prohibit IV infusions, even of legal substances, if it’s not related to a hospitalization or directly approved by USADA.

Danielle Eurich, social media and media relations specialist with USADA, confirmed that the post below, which Lochte uploaded in May, launched a USADA investigation that resulted in a 14 month suspension from competitions. Lochte, a 12-time Olympic medalist, captioned the picture with “Athletic recovery with some #ivdrip @revivalivlounge #vitamins.”

Lochte appears to have deleted the post from his social media.

The post included a tag for Revival IV Lounge, which advertises itself on Instagram as “Gainesville’s premier IV Hydration Wellness Lounge,” offering IV drips for hangovers, energy, beauty and chronic illness. A person who answered the phone at Revival IV Lounge declined to comment on whether Lochte had received infusions there or was paid to promote the business on social media.

In its announcement of Lochte’s suspension, USADA says “Lochte received an intravenous infusion of permitted substances at an infusion clinic in a volume greater than 100 ml in a 12-hour period without a Therapeutic Use Exemption (TUE). Intravenous infusions of injections in a volume greater than 100 ml within a 12-hour period are prohibited at all times — except for those legitimately received in the course of hospital treatment, surgical procedures or clinical diagnostic investigations…” Lochte was not receiving the infusion during a hospitalization nor had he received an exemption from USADA.

At a press conference in Fort Lauderdale on Monday, Lochte told reporters the infusion was a B vitamin complex. “I wasn’t taking anything illegal. Everything was legal. You can get it at CVS, Walgreens, but there are rules, and you have to obey them.”

Lochte recently completed another U.S. Olympic Committee and USA Swimming-imposed suspension for his activities during the 2016 Olympics in Rio de Janiero. Following his meets, Lochte and several other U.S. Olympic swimmers vandalized a Rio gas station and initially claimed they had been robbed at gunpoint. Lochte later admitted his story was “exaggerated.”

In 2016, Lochte was suspended for 10 months, and lost major sponsors, including Speedo and Ralph Lauren. He only just returned to competition last year, and was planning on competing at the upcoming U.S. national swimming championships in Irvine, California.

More: Ryan Lochte Has Never Played by the Rules

That won’t happen, since USADA banned him from swimming in competitions through July 2019, starting in May, when the picture was posted.

Lochte was focusing his efforts on returning to Olympic swimming in Tokyo in 2020, and during his earlier suspension got married and became a father to son Caiden. “It’s a hard sanction because I wasn’t taking anything illegal, but a rule is a rule. I wasn’t too clear on the rules, but now I am.”

He said Monday he remained committed to swimming at the Olympics again. “Don’t worry. I’m not giving up. I’m going to keep going.” 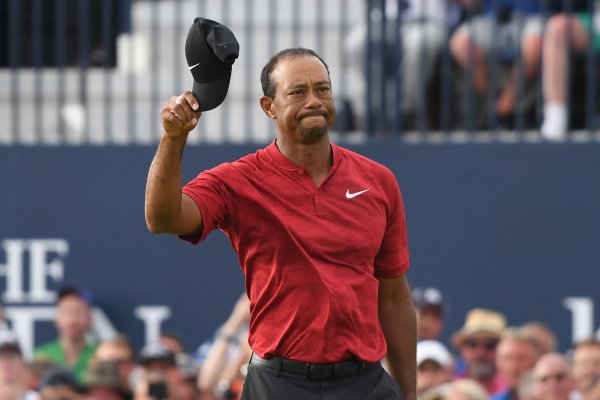 How Tiger Woods Keeps Knocking on the Door
Next Up: Editor's Pick