Out of the Shadows: Pakistan's Transgender Candidates Step Onto the Political Stage

Each week, residents of Islamabad call in to Nadeem Kashish’s radio show to vent frustration with the problems bedeviling Pakistan’s capital: a lack of running water; chronic electrical outages; soaring rent prices. On air, Kashish’s voice crackles with energy, imploring listeners to vote and hold politicians accountable on their campaign promises. But the program has been flooded in recent weeks by a new kind of call: Well-wishers ring in to congratulate the 35-year-old transgender woman on her bid to take the political reins of the capital — a coveted constituency where she will face off against several political heavyweights.

“I am running against big names like Imran Khan and former Prime Minister Shahid Abbasi, and I’m not considered a real threat,” Kashish, who is running as an independent in Pakistan’s nationwide elections on Wednesday, tells TIME. When she’s canvassing voters door-to-door, some jeer and poke fun at her appearance; she has close-cropped hair, sometimes wears lipstick, and does not conform to gender binarism. “People hear about my election run and think it’s a joke, they just start to laugh,” Kashish says, imitating her critics with a high-pitched chuckle.

Kashish, whose family disowned her at a young age, is an unconventional politician. She lives in a group home of transgender people in one of Islamabad’s grittiest slums, Mohallah Noori Bagh, Bari Imam. Kashish is one of a handful of transgender candidates stepping up to run for public office. The Muslim-majority country of 207 million gave transgender citizens the right to vote in 2011, and this week will see three transgender candidates running for seats in the National Assembly, as well as two others for seats in provincial legislatures.

Advocates estimate that Pakistan’s transgender community numbers half a million, though official census figures count them at 10,000. South Asian society has traditionally viewed the hijras or khwaja siras, as they are sometimes known locally, with a mixture of veneration and suspicion; believed to have mystical powers, many people fear their curses but invite them to bless childbirth and marriage ceremonies. During colonial rule, the British enacted the Criminal Tribes Act in 1871, which branded hijras and other social minorities as threats to public order and morality. Members of the marginalized group have historically been relegated to begging — even today, it is not uncommon to see trans men and women panhandling at stoplights in major cities.

A Pakistani transgender activist poses for a photograph as they take part in a demonstration in Karachi on Nov. 20, 2017.
Asif Hassan—AFP/Getty Images

The transgender community has made tremendous strides in terms of legal rights in post-Independence Pakistan, though they still face discrimination, harrassment and societal exclusion. A 2009 Supreme Court verdict officially recognized the rights of those identifying as third gender, and in May, the National Assembly passed a landmark Transgender Persons (Protection of Rights) Act enshrining basic rights and outlawing harassment and discrimination. But a string of killings just this year underscored the violence and discrimination still faced by the trans community. This month, a transgender citizen was shot dead at a wedding in the eastern province of Punjab, while in March another was murdered by motorcyclists in an apparent hate crime in the frontier city of Peshawar. The TransAction Alliance, a Pakistani trans-rights organization, has reported more than 50 such deaths in the last three years.

“Until you can influence the laws, you are their slaves — you are following rules and laws set by someone else,” says Nayyab Ali, a 26-year-old transgender candidate running in her hometown Okara, a city in Punjab, the country’s most populous province. Running on the Pakistan Tehreek-e-Insaf Gulalai party ticket, Ali is one of the few transgender candidates representing a political party; most have shied away from trans candidates, viewing them as novelty runs that attract attention but yield few votes. Ali, who was attacked with acid by a previous boyfriend, is hopeful that she can advance transgender, minority and human rights. “We are not just the voice of the transgender community, we are also the voice of women and minorities,” she says. “If you want a real change, vote transgender.”

Read more: Ahead of Pakistan’s Elections, Transgender Activists Push for a Seat at the Table

Activists say there are still barriers even getting the community to the polling stations, despite at least 25 transgender people serving as election observers. Separate male and female polling stations lead some to fear harassment if they are seen to be entering the “wrong” station. Others stay away because they lack identity cards listing them as being transgender, despite recent electoral reforms promising expedited documents. Moreover, many transgender people are registered to vote in home districts from which they have been ostracized.

“This is everyone’s story,” says Kashish, whose own family banished her from their home in Multan, seven hours away by road from Islamabad. But while she may not be welcome in her own home, Kashish has found a place in the lives of her listeners — even if elections don’t end in her favor. “My voice has traveled far, it’s reaching the whole world,” she says. “This is my victory; if you go in front of people and show your character, they will accept you.” 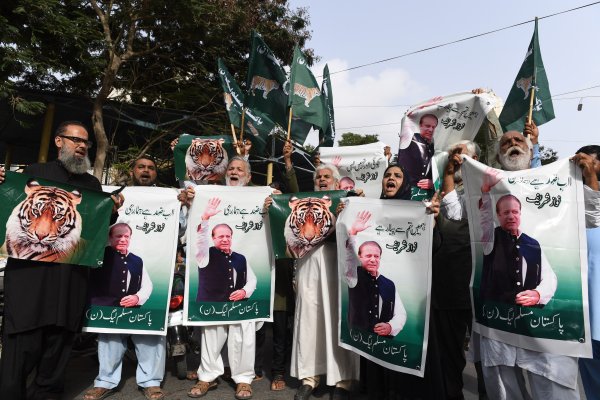 What to Know About Pakistan's Upcoming General Elections
Next Up: Editor's Pick