Leave it to Stephen Colbert to make his best attempt at an intervention speech urging President Trump to let go of his post as the U.S. head of state. The Late Show host, who has been on a roll lately with his political satire, tried out the cinematic version of a staged intervention for his studio audience on Thursday night, presenting a monologue that cut to the heart of his feelings.

“Sir, you’re here because we love our country very much and you are in it,” Colbert joked in the faux intervention statement, addressing Trump. “And we need you to hear some things. When you attack NATO, I feel like I’m being attacked. And your friend Vladimir, he’s not really your friend, OK?”

Colbert continued: “So instead of sucking up to dictators, we want you to find a safer hobby, like volcano parkour. Or shark dentistry. Or heroine. We’ve got a facility waiting for you. You can go there any time and we’ll pay for it. Paul Manafort‘s already there.” (Manafort, Trump’s former campaign chairman, is currently in jail awaiting trial on charges of obstruction of justice.)

While it’s highly unlikely Trump will ever hear this particular intervention, it’s just as certain that Colbert will continue to make his views on the President’s fitness for office quite clear. 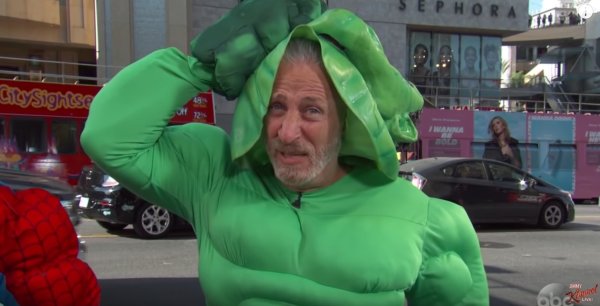 Lately Jon Stewart Is Filling His Time By Dressing as the 'Adequate' Hulk
Next Up: Editor's Pick