Man Up, Wellesley: You're a Generation of Sheltered Children

WELLESLEY - FEBRUARY 6: The sculpture entitled "Sleepwalker" is part of an exhibit by artist Tony Matelli at the college's Davis Museum.
Darren McCollester—Getty Images
By Charlotte Alter

We all hate tighty-whities, but really, Wellseley, come on.

Yes, the statue of a hyper-realistic sleepwalking man on the Wellesley College campus is truly creepy. His outstretched arms and lolling mouth make him look like a pasty, middle-aged zombie. His flaccid penis sagging in his graying briefs will haunt your dreams forever, like the ghost of your future sex life.

But outraged students at the prestigious women’s college aren’t just averting their eyes; they’re demanding that Tony Matelli’s “The Sleepwalker” be taken inside, calling it a “trigger” for sexual assault survivors. A Change.org petition demanding the statue’s removal already has almost 600 signatures, roughly a quarter of the student population. The petition calls the statue “a source of apprehension, fear, and triggering thoughts regarding sexual assault for some members of our campus community.”

Commenters on the Change.org petition are outraged at the statue’s presence on campus. One wrote:

All that’s well and good, but let’s pick our battles, shall we? “The Man” we’re fighting probably isn’t the undies-clad, balding statue with a hint of man-boob. That’s just a steel and fiberglass boogeyman.

The statue is part of the Wellesley College Davis Museum’s temporary exhibit of Tony Matelli’s work, which ends in May. Museum Director Lisa Fishman defended the statue’s placement on the side of the road, still on museum property. “I love the idea of art escaping the museum and muddling the line between what we expect to be inside (art) and what we expect to be outside (life),” she wrote in a statement on the museum’s website, “As the best art does, Tony Matelli’s work provokes dialogue, and discourse is at the core of education.”

Of course, there are many things that can evoke disturbing memories for people who have survived sexual assault. It’s a crime that can haunt a survivor for her entire life, and chances are she’ll spend a lot of time fighting back the memories, whether they’re “triggered” or not. Survivors need community support and lots of therapy to move forward, but not Soviet-level censorship.

Our new Awareness Culture has done a lot of good in the world, especially when it comes to forcing us to acknowledge issues that affect people in the minority. It’s because of Awareness Culture that we rightly call Blurred Lines sexist, Paula Deen racist, and keep our pronouns straight when talking about transgender people.

But the problem with Awareness Culture is the expectation that once offended – or, in most cases, once a hypothetical offensiveness has been identified – the world must immediately act to make the “bad thing” disappear. There’s something spoiled about our knee-jerk reaction to abolish anything that could be considered even remotely insensitive. The message is, “it’s possible that someone somewhere might feel momentarily bad because of this, so get rid of it right this second! And by the way, you’re an asshole if you don’t agree.”

It’s the refrain of a generation of sheltered children who grew up to insist on sheltering themselves as adults. They’re the grown-up versions of the kids who wouldn’t watch rated R movies because they “might be scary.” They want to purge the world of anything remotely problematic, anything that might offend, might give pause, might cause even a moment of ickiness. If they deem it offensive, it must cease to exist on this earth. It’s a weirdly Puritan strain of liberalism.

Now that the statue has been called “offensive” to sexual assault survivors, many people will say that by defending it I’m on the side of rape apologists and Woody Allen supporters (I’m not, obviously.) It’s like freeze-tag; once someone says the “O” word, everyone’s on the defensive. It’s a discussion that isn’t up for discussion.

But let’s go back to the underwear zombie. If “The Sleepwalker” is a sexual assault “trigger,” then so is every Jockey ad, most men at the beach, and a poster of Mark Wahlberg I have hanging over my bed. Unfortunately, we live in a world where we sometimes see guys in their underwear. Believe me, I wish it weren’t so.

And quibbling about whether or not women should have to sometimes see men in their skivvies is a waste of time. These kinds of mini-debates represent an all-or-nothing breed of feminism that’s drowning in theoretical value judgments (is Frozen’s title sexist?) instead of solving real-world problems, like the fact that one in three American women live in poverty or on the brink of it.

In many ways, Wellesley is the vanguard of the feminist movement– Hillary Clinton, Madeleine Albright and Nora Ephron are all alumnae — and the women there are some of the smartest in the world. They have the brains, guts, and gumption to tackle some of the most serious issues facing women today. They should stop chasing boogeymen. 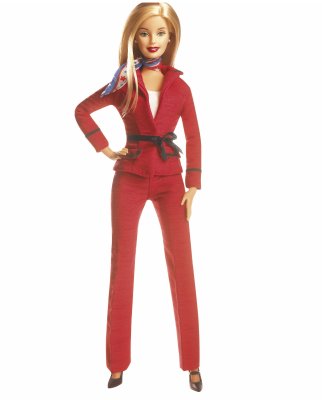 In Defense of Barbie: Why She Might Be the Most Feminist Doll Around
Next Up: Editor's Pick