Turkey Is Heading for Economic Meltdown

People walk past a poster of Turkey's President Recep Tayyip Erdogan in Istanbul on the eve of the country's June 24 2018 parliamentary and presidential elections.
Chris McGrath – Getty Images
Ideas
By Fadi Hakura
Hakura manages the Turkey Project at Chatham House and is an expert in Turkey's foreign and domestic policy. He is a qualified solicitor and has previously worked at the European Commission and the World Bank.

Fifteen days after Turkey’s parliamentary and presidential elections, Turkish President Recep Tayyip Erdoğan appointed a new government under radically enhanced executive powers granted by the constitution. He chose 16 loyalists and partisan figures to ensure that he remains front and center in decision-making and policy formation.

Most notably, Erdoğan sacrificed the former deputy prime minister and ex-Merrill Lynch chief economist Mehmet Şimşek in favour of his inexperienced son-in-law Berat Albayrak as finance and treasury minister to manage the fragile economy. Whether he has the competence to placate jittery financial markets and foreign investors is debatable.

Erdoğan will prioritize short-term growth at all costs to the detriment of macroeconomic and financial stability. That entails foregoing interest rate hikes needed to contain runaway double-digit inflation and to support a plummeting lira that depreciated nearly 20 per cent this year. It also means loosening the purse strings, flooding the markets with cheap credit and sponsoring rampant construction and mega-infrastructure projects.

True to his promise, he has appropriated to himself, by presidential decree, the right to hire the central bank governor, deputies and monetary policy committee members for a four-year term. This completes the politicization of the once-respected and independent central bank and is in line with his unorthodox monetary views that higher interest rates equates with higher inflation.

Erdoğan associates progress with gleaming high-rise buildings, gargantuan infrastructure show-pieces and elevated growth rates. He is spiking the fuel to boost the speed of the sputtering mid-sized Audi-style Turkish economy to achieve superior Ferrari growth rates. As any mechanic knows, these tactics are unsustainable in the long term. Eventually, the engine will burn out.

He does not seem to appreciate that Turkey’s growth model requires an overhaul to join the league of rich economies. It is too reliant on consumer spending and government-sponsored infrastructure and construction projects funded by speculative financial flows rather than on sustained private investment and exports.

Net result: the corporate sector’s foreign-exchange liabilities have climbed to a record $328 billion as of the end of 2017. When netted against foreign-exchange assets, it is still a worrying $214 billion. Its U.S. dollar and euro debt pile has more than doubled since 2008, 80 per cent of which is held by domestic banks. Given these acute balance-of-payments conditions, it is not farfetched that Turkey may impose capital controls in the short-to-medium term to restrict the outflow of foreign assets. At $50 billion, the current account deficit—defined as the sum of the trade balance and financial flows—is not even covered by the central bank’s net international reserves at nearly $45 billion.

Unsurprisingly, some major Turkish companies are negotiating with their bondholders to restructure their sizeable foreign loan obligations as lira devaluation increases the financial burden. Should a significant number of Turkish corporates default on their foreign obligations, this would reverberate across the Turkish economy, cause mass consumer panic, shake the confidence of international financial markets and potentially lead to a crisis within the Turkish financial system and to a deep and prolonged economic recession.

Revealingly, Erdoğan’s nationalist allies, the Nationalist Movement Party (MHP), refused to join his government. Perhaps Devlet Bahçeli, the MHP leader, learned the lessons of the 2001 financial crisis as a member of a three-party government. So he is opting to project influence from the outside, rather than risk being tainted with responsibility for an economic downturn.

Turkey’s president is doubling down on his singular approach to governance irrespective of the fallout. Notwithstanding his current political dominance, the deteriorating state of the economy is his Achilles’ heel and the biggest threat to his currently unrivaled leadership. 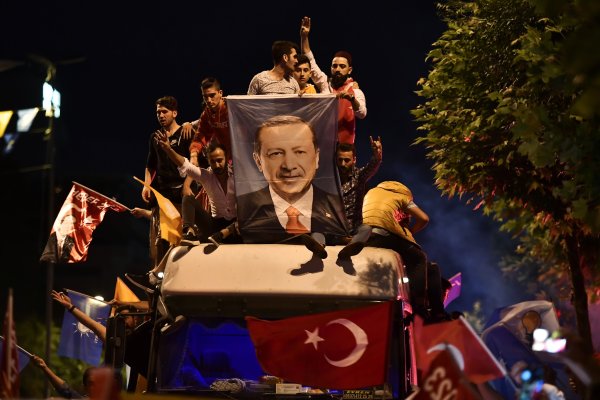 Why America Should Pay Attention to Turkey's Election Result
Next Up: Editor's Pick