American-Vietnamese citizen William Nguyen is escorted by policemen to a courtroom for his trial in Ho Chi Minh City on July 20, 2018.
AFP—Getty Images
By Casey Quackenbush

A court in communist Vietnam on Friday ordered the release and deportation of American student Will Nguyen, who was detained last month during an anti-China protest.

Nguyen, a 32 year-old Houston native, was charged with “causing public disorder” at protests on June 10 in Ho Chi Minh City.

The charged carried a potential penalty of up to seven years in prison, but the attorney general recommended to judges that Nguyen be deported back to the U.S. since it was the first time he committed a wrongdoing in the country, according to an Amnesty International source present at the hearing.

“MAJOR UPDATE: WILL IS COMING HOME!!!” read a post on a Facebook page set up by Nguyen’s friends and family to raise awareness of his detention, confirming that he would be returning home.

A Yale graduate of Vietnamese descent, Nguyen was arrested last month during mass demonstrations in Vietnam’s southern business hub. Prompted by fears of Chinese encroachment, thousands of people in cities across Vietnam reportedly flooded the streets in backlash against protest government plans to allow foreign companies long-term leases in the country’s special economic zones. The leases would be dominated by investors from China, with which Vietnam has a contentious relationship.

A police statement said Nguyen incited others to protest and attempted to turn over a police truck, Reuters reports.

Video footage from the June 10 protests shows Nguyen with a bloodied face as a group of plain-clothed officers beat and drag him along the road. More than 100 other protesters were arrested in Binh Thuan Province, outside Ho Chi Minh City, after storming a government building, according to the New York Times.

Freedom of assembly is protected by Vietnam’s constitution, but the communist country tolerates little dissent and police often disband protests. According to Human Rights Watch, 2017 was one of the harshest years for dissidents in Vietnam; at least 41 activists were arrested and 24 convicted. This year, at least 26 known activists have been convicted since May. Vietnam has more than 140 political prisoners.

“We are pleased that William Nguyen will be reunited and returning home with his family,” said Francisco Bencosme, Asia Pacific advocacy manager at Amnesty International, in a statement to TIME. “However we don’t believe he should have been detained and charged in the first place for freely expressing himself and exercising his right to protest.”

Nguyen apologized on state television last month for breaking the law and promised not to participate in further “anti-state activities.” Detained since his arrest, Nguyen’s trial was his first public appearance since the televised confession. Vietnam’s single-party government has been known to make a show of accused criminals in public confessions, sometimes by coercion or in exchange for more lenient sentences.

Nguyen was visiting Ho Chi Minh City ahead of his graduation this summer from a master’s program at the from the Lee Kuan Yew School of Public Policy at the University of Singapore. He had been live-tweeting the event up until his arrest.

His trial comes two weeks after Secretary of State Mike Pompeo raised the case with senior Vietnamese officials during his Asia trip and pushed for “a speedy resolution,” Reuters reports. Nguyen’s family and friends had previously called on the Trump Administration to intervene.

“I take great comfort in knowing that my constituent, William Nguyen, will soon be reunited with his family after his harrowing ordeal in Vietnam,” read a statement from California Congressman Jimmy Gomez, who led a bipartisan letter with 19 House and Senate members urging Pompeo to secure Nguyen’s safe and swift return. “The sheer determination and resolve exhibited by the Nguyen family during this traumatic experience was nothing short of inspiring.”

Nguyen was granted consular access on June 15, June 29 and July 13.

According to local media, a court in Binh Thuan province last week sentenced six Vietnamese nationals to 18 to 30 months in jail for clashing with police. 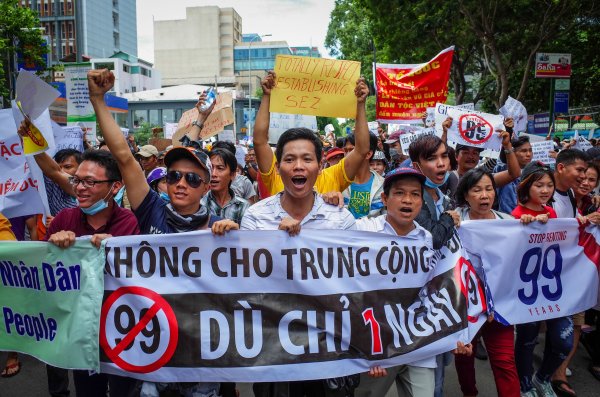