The Senate unanimously voted to reject Russian President Vladimir Putin’s proposal to put American diplomats up for questioning by Russian authorities, after failing to pass two other measures that would have affirmed its commitment to the the intelligence community’s findings that Russia meddled in the 2016 election.

The Senate voted 98-0 in favor of a non-binding resolution opposing the offer Putin made to President Donald Trump in Helsinki to exchange Russians indicted by Robert Mueller’s probe for respective questioning with American officials who they believe committed crimes against the Kremlin. (Two Senators were not present).

The resolution was brought by three Democratic Senators: Minority Leader Chuck Schumer, New Jersey’s Bob Menendez and Hawaii’s Brian Schatz. But while it was drafted along partisan lines, the rare unified show of opposition from the Senate stood in stark contrast to Trump, who initially called the offer “incredible” before reversing course on Thursday. On Wednesday, White House Press Secretary Sarah Huckabee Sanders said Putin and Trump had discussed the deal during their private summit, and that it was still under consideration, but issued a statement Thursday claiming Trump doesn’t agree with it.

Putin had suggested in Helsinki that Mueller’s team would be allowed to question those Russians on their native soil if Russia could question associates of Bill Browder, a British financier who works as an activist on Russian state corruption. But this week, the Russian attorney general’s office sent the U.S. a list of 11 people it wants to question in relation to Browder, which the State Department called “absurd.”

Former Russian Ambassador Michael McFaul, one of the people on the Russians’ list, praised the Senate for passing the resolution. “Bipartisanship is not dead yet in the US Senate,” McFaul tweeted. “Thank you all for your support.”

But just two hours earlier, bipartisanship didn’t seem so alive – in either chamber.

Two resolutions had been brought to the Senate floor earlier in the day: one from Vermont Sen. Bernie Sanders, and one from Delaware Sen. Chris Coons and Arizona Sen. Jeff Flake. The two resolutions both vowed that the Senate would hold Russia accountable through sanctions and backed the intelligence community’s findings of election interference. Sanders’ resolution also called for Trump to cooperate with Special Counsel Robert Mueller and to ensure a lack of interference in the investigation, while Coons and Flake’s resolution called for the release of the notes from Trump and Putin’s meeting.

In the House of Representatives, two Democrats on the House intelligence committee, ranking member Reps. Adam Schiff and Eric Swalwell, moved to subpoena the interpreter from Trump’s meeting with Putin, but were blocked by their Republican colleagues. And Democratic Rep. Mike Quigley introduced an amendment to a spending bill that would have allocated more money for election security, but Republicans shot it down.

Both of the Senate resolutions were non-binding, but required unanimous consent to move forward. Neither one got it. Kentucky Sen. Rand Paul objected to Sanders’ resolution, and Senate Majority Whip John Cornyn objected to the bipartisan resolutions from Coons and Flake.

Claiming that the Senate suffers from “Trump derangement syndrome,” Paul argued that Sanders’ resolution would undermine diplomacy with Russia. “The hatred for the President is so intense that partisans would rather risk war than give diplomacy a chance,” he said. “Nobody is saying or excusing Russia’s meddling in our elections – absolutely we should protect our elections. But simply bringing the hatred of the President to the Senate floor in order to say we’re done with diplomacy, we’re going to add more sanctions. … I would rather we still have open channels of discussion.”

If Paul seemed to be defending the President’s intentions, Flake – a frequent Trump critic – openly questioned them. Introducing his resolution on the Senate floor, Flake called the Helsinki summit – and Trump’s refusal back his intelligence community in front of Putin – an “Orwellian moment,” a reference to dystopian novelist George Orwell.

“What we saw earlier this week in Helsinki is what happens when you wage war on objective reality,” Flake said of Trump’s comments. “For nearly two solid years, calling real things fake and fake things real as if conditioning others to embrace the same confusion. Ultimately, you are rendered unable to tell the difference between the two.”

As he has before, Flake called on his Senate colleagues to put “country over party” – this time for the sake of global security. But his passionate plea didn’t win over Cornyn, who objected to the resolution on the grounds that it was merely symbolic.

“Our committees that have jurisdiction over these issues ought to be permitted to call the witnesses and ask the hard questions and develop the record before we go on record as to a resolution like this,” Cornyn said. Flake promptly rebutted him. “This simply says in a symbolic way that we in the Senate don’t buy Vladimir Putin’s denial of election interference,” he said.

Although Flake and Coons are from different sides of the aisle, and vowed to bring their resolution to the floor until it passed, the inability to garner unanimous consent on the resolutions – when the facts they contained about Russian meddling have been universally agreed upon by the Senate Intelligence Committee – highlighted the party divisions in the Senate, something Minority Leader Chuck Schumer was quick to seize on. 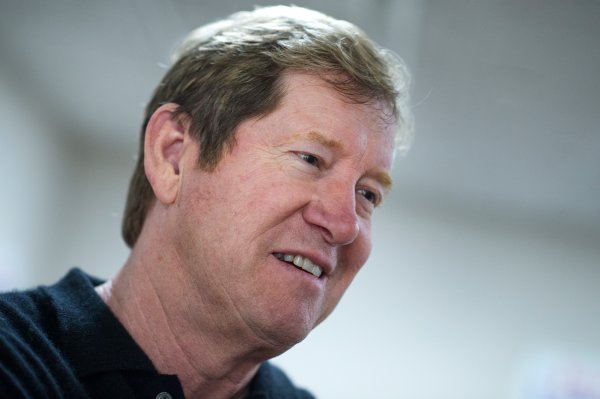 Audio Emerges of Minnesota Congressman Complaining About Not Being Able to Call Women 'Sluts'
Next Up: Editor's Pick