This Runaway 'Pug Mug' Had the Most Adorable Jail Stint

Bean the pug may not be on New Jersey’s Most Wanted list for criminal behavior, but she did have a brush with the law that is now forever recorded in Cape May Police Department history.

The tiny renegade dog was discovered trespassing on private property, according to local news, so the cops picked her up for safekeeping. Not only did Bean get a ride in a squad car, but the police also decided to have a little fun with the pup once they got to the station, setting her up for an adorable mug shot and organizing a photo shoot in a jail cell.

“This is what happens when you run away from home. This guy was captured sneaking through yards on the 1300 block on New Jersey Avenue,” the police department captioned the mug shot in a post shared to Facebook. (They also, of course, asked anyone with the owner’s information to contact their department.)

After a few hours, Bean’s owner did indeed discover she was missing and scooped her up out of custody. “The pug’s owner has been located, and he has been released on bail,” the cops joked on Facebook. Lucky Bean: that was a close call with the law. As for how Bean is doing now? According to a comment from someone who identified as her owner, she was napping just after the ordeal. “She is sound asleep at home after an exciting afternoon on the run,” Hadley Hubbard wrote on Facebook, thanking the local police for their work with her rebel pup. 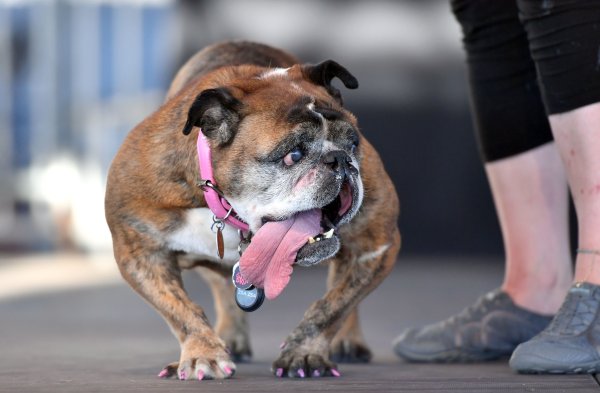 The World's Ugliest Dog Has Died 9 Days After Securing Her Title
Next Up: Editor's Pick