Speed-slicing watermelons is not an activity for the faint of heart.

In fact, most of us enjoy our watermelons as a lazy summer day snack, best enjoyed while perhaps reclining poolside. But for daredevil fruit destroyer Ashrita Furman, there’s no better way to spend a day than slicing watermelons as fast as possible — on his own stomach — in search of the glory of a new Guinness Book of World Records title. (Spoiler alert: Furman was victorious in his pursuit of the title.)

On Tuesday, ABC reports that Furman brought together some assistants to help him with his goal. He ultimately prevailed in his pursuit, machete-whacking 26 of the giant melons in one minute — and all of that accomplished without injuring his own stomach, which served as the cutting board for the dangerous endeavor.

As if that wasn’t enough, it turns out Furman has tried similar stunts before. Not only does he also hold the record for slicing watermelons on a friend’s stomach (that’s a pretty good friend!), but he has set more than 600 records and Guinness itself calls him their “most prolific record-breaker.”)

As for the watermelons he sliced? They were later used in drinks at a local restaurant, so at least some people enjoyed them without putting their lives at risk in the process. 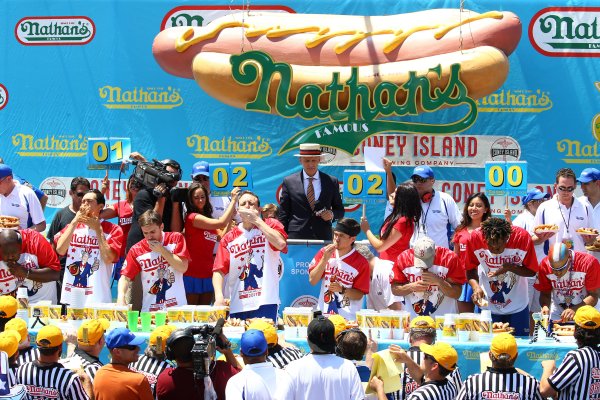 What to Know About the 2018 Nathan's Hot Dog Eating Contest
Next Up: Editor's Pick