The moral philosopher Martha C. Nussbaum talks to TIME about her new book, The Monarchy of Fear: A Philosopher Looks at Our Political Crisis, the right way to be angry and what Americans fear.

You began your new book,  The Monarchy of Fear, when the 2016 election left you feeling that fear was “suffusing” society. Was the fear there all along?

Fear is ubiquitous in human life. It starts in infancy with our primal state of helplessness, where we can see what’s going on but we can’t move to get it. As we grow older we become a little more able to get what we want but then we’re going to die so that gives fear another boost. But it’s heightened when there’s a threat. In this situation it’s the combination of extreme polarization, where people are buffeted by conflicting views, and conditions — such as automation, outsourcing and globalization — that make people whose living standards have dropped feel a sense of acute powerlessness.

You note that using examples from ancient history helps you avoid that polarization. How did you come to that approach?

When I was giving  the Jefferson Lecture [for the National Endowment for the Humanities], I really did want to reach out to all kinds of people, so I didn’t include contemporary political references. Afterward, I got letters saying, ‘It’s so refreshing to hear something that’s not just Trump Trump Trump.’ The favorable reaction to that strategy made me write to my publisher and say, I do want to write the book that way. I decided that, aside from the misogyny chapter where I do use political examples, I wanted to go with that good reaction. People like to have something that’s above the fray.

The chapter on fear in misogyny really picks apart sexist arguments. As a woman who studies emotions, has the sexist trope that women are “too emotional” ever gotten in your way?

There were ridiculous things that happened, like when I was in graduate school and I wanted to start working on [the philosophy of emotions], there was an adviser I had who I heard talking about somebody else, and he said, ‘She wants to write on Aristotle’s views of friendship but that’s because she’s just fallen in love.’ I thought, ‘How ridiculous, one fifth of the entirety of Aristotle’s ethics is on that topic.’ I think it’s partly English culture — this is somebody who was British — and partly also just that men in philosophy, and they were all men at the time, had just simply not seen fit to investigate the messier parts of the personal life. It was big in the history of philosophy but it had kind of dropped out, and there were a couple of people who started to bring emotions back. So I was lucky to have people who had forged a path  I could walk on. I didn’t have to chop the underbrush. But still, yes, I got that. There’s another thing I get too, which is that if you talk about emotions and you don’t seem to be flying into a hysterical tantrum, then you must be cold. It’s hilarious, because I’m actually a very emotional person.

As the study of emotion grows, how might those ideas change?

It depends on which emotion you’re talking about. To be angry has been an assertion of masculinity. Once you start looking at it, the issue of who’s “more emotional” and what that means starts to break up.

But women’s anger is getting a lot of notice lately, with some seeing rage as a rational response to the world. You take a stance in the book against retributive anger, so what would you say to those who think indignation isn’t enough?

It’s very important first to take apart the anger. The outrage-protest part that says, ‘This is wrong and this shouldn’t happen again,’ that’s always valuable. We’d better state and name the wrongs that have occurred. I think women have been doing this with great courage and with great effect recently. The part that says, ‘We’d better try to fix it by making the doer suffer,’ I think that’s actually confused and not very helpful. Then there’s a whole other debate about the purpose of punishment. I’m certainly not saying people shouldn’t be brought to justice.

How can we talk about the right way to be angry without “tone policing,” or letting that distract from whether the anger is valid?

Martin Luther King Jr. is one of the most profound philosophers about anger, and what he thought is that you need to focus on the dignity of the people who suffered, and the dignity of their complaint and their outrage, but the retributive part is not part of that. He said their anger has to be “purified” and “channelized,” he used those two words — meaning, we keep the outrage and we keep the courage, but the retributive part about causing a lot of pain isn’t very helpful. You have to turn to the future and think which emotions will actually help us solve the problem. I think that’s the test.

It’s always easier for people to face backward than to face forward. The future is uncertain. King was very good at giving people short-term goals they could actually do, but it is hard and it’s even hard in [one’s] personal life. If you’ve been betrayed by a spouse or a partner, it’s much easier to focus on causing that person pain than it is to turn forward and actually create a life that’s worthy of you in the future.

In general, what’s it like to be dealing normatively with a realm of life that’s so personal?

I think it is hard. I wrote about my own sexual assault in the Huffington Post, but I was a coward, I have to say. Maybe in 1968 you probably wouldn’t be able to achieve anything by going to the police, but even much later when this person was running for Congress, I didn’t come forward. I really want to express my admiration for the women who [did so] at a much greater risk — I’ve got tenure, I’m secure, the person who assaulted me is dead, so I’m not really risking anything by coming forward at this point.

But you describe your actions and feelings as cowardly, which is negative. Is there really a right way to feel a feeling?

Look, I think sexual assault is such a personal thing, I don’t want to tell anyone else what to do with it. That’s really very personal. I do admire the women who took a risk and came forward, and I also admire the people who do different things, the people who write about this and are in the trenches helping other women as lawyers. I teach feminist philosophy all the time and do write on this topic, so I guess I think there’s more than one way to deal with it as well. But naming the wrong is a crucial part of attaining justice.

People in this country have such acute fear that they’re going to be bankrupted by an illness. I had an illness in my own family this year where the ill person was uninsured. It was an amazing fear that even I had.

How closely related do you think the strength of the social safety net is to the level of fear in a society?

It’s only one thing and of course people have fear from other things — the fear of the loss of social status, and that’s [behind] the fear of women and minorities entering the workplace, but I do think [there’s a] fear of just not being able to achieve a certain living standard because of the absence of a social safety net.

So your fixes for fear range from growing the social safety net to supporting  the arts. How do those fit together?

There’s a benign circle. Attitudes formed toward fellow citizens through arts programs help create the climate in which people support policies that include the social safety net.

Does the fact the arts part is intangible make it harder to advocate?

There is that tendency. That’s part of why I write so much about the humanities. We need to understand one another and we need to be able to look one another in the eye with a mobile imagination and with love. If we don’t have that, we can’t move forward at all. And often these things don’t cost a huge amount of money. I don’t think you have to have fancy lighting equipment or whatever to have kids put on a play.

What do you do when you feel  fear?

I listen to music. I particularly love Mozart. He’s obsessed with this question of how we move into a space of greater brotherhood and equality, and he puts these ideas into the music.

What’s your favorite emotion to experience?

But there are so many types of love. Romantic love, family love, friendly love and the kind where you don’t even like the people but you’re committed to goodwill. We can never have too much.

A version of this interview appears in the July 30, 2018, issue of TIME 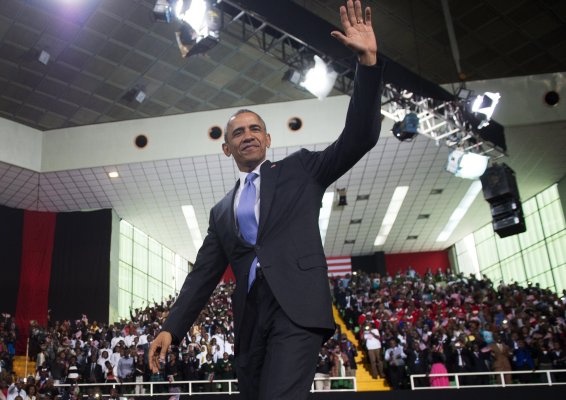 These Are the 6 Books Barack Obama Thinks You Should Read This Summer
Next Up: Editor's Pick