'History Has its Eyes on Us.' James Comey Wants Americans to Vote for Democrats This November

Former FBI Director James Comey — at one point a registered Republican — is urging Americans to vote for the Democratic party in the upcoming midterm elections this November, claiming that the current Republican Congress failed to live up to the country’s founding ideals.

“This Republican Congress has proven incapable of fulfilling the Founders’ design that “Ambition must … counteract ambition,” Comey wrote in a tweet Monday night. “All who believe in this country’s values must vote for Democrats this fall. Policy differences don’t matter right now. History has its eyes on us.”

Comey, a veteran of the George W. Bush and Obama Administrations who also served as Trump’s FBI director for nearly four months until his controversial termination, said during Congressional testimony in 2016 that he had been a longtime registered Republican, but that he no longer affiliated with the party.

Comey didn’t explain his Twitter plea, aside from his dissatisfaction with the current Republican Congress. The tweet comes as President Donald Trump finds himself embroiled in controversy over his refusal during a joint press conference with Russian President Vladimir Putin to accept the assessment from the U.S. intelligence community that Russia interfered in the 2016 election. Comey was head of the FBI when the organization launched its probe on this topic. Although Congressional Republicans rebuked Trump’s remarks, they have largely stayed silent since Trump said he misspoke by using the word “would” instead of “wouldn’t,” an explanation Democrats deemed wholly unsatisfactory.

But Comey’s disappointment with the Republican party has been longstanding. In February, he called the memo authorized by the Republicans on the House Intelligence Committee that alleged the FBI was biased when investigating the Trump campaign’s ties to Russia “dishonest and misleading.” In April, during his publicity blitz in anticipation of his new book, Comey told ABC News that, while there are still some Republicans he respects, he couldn’t associate with the party as a whole because it had shred its core values in deference to Trump. (That same month, the Republican National Committee launched a website, lyincomey.com, to challenge his public statements)

“It doesn’t reflect values at all. It’s transactional, it’s ego-driven, it’s in service to [Trump’s] ego,” Comey told the network. “And it’s, I think, consoling itself that we’re going to achieve important policy goals — a tax cut or something.” 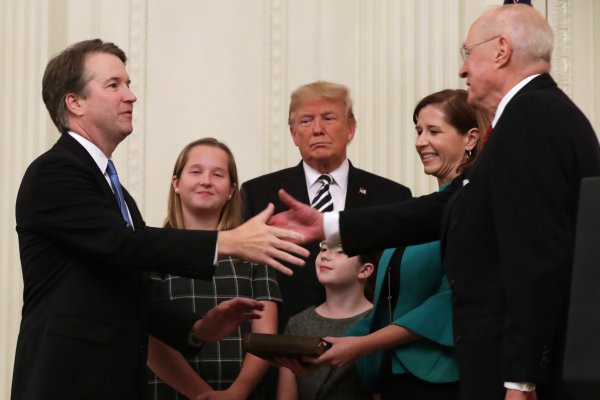 How to Fix the Broken Supreme Court Confirmation Mess
Next Up: Editor's Pick