'Don't Ask, Don't Tell' Was a Complicated Turning Point for Gay Rights. 25 Years Later, Many of the Same Issues Remain

U.S. President Bill Clinton addresses the nation about his decision to lift a 50-year ban on homosexuals in the military on January 29, 1993.
DAVID AKE—AFP/Getty Images
By Alejandro de la Garza

Former President Bill Clinton unveiled “Don’t Ask, Don’t Tell” to America via a grainy C-Span telecast from the National Defense University in Washington D.C. 25 years ago Thursday. Up until that point, gay men and women had been completely banned from serving in the military.

Under the new policy, gay people who wanted to join the armed forces would no longer be forced to lie about their sexual orientation, but they were still not permitted to disclose their sexuality. Though it was billed as a compromise between Clinton’s base and the military leadership and their allies in Congress, “Don’t Ask, Don’t Tell” (DADT) prompted outrage from many gay rights advocates who argued the new policy was simply a repacked version of the old ban that was put into place.

Looking back 25 years later, the national debate surrounding Clinton’s announcement of DADT echoes the current fervor set in motion last July by the Trump Administration’s ban on transgender troops serving in the military.

Here’s a look back at how the DADT policy was put in the place, what the reaction to it was when it was introduced and how the conversation surrounding it has changed over the last two decades.

Early resistance from the military

As a presidential candidate, Clinton had publicly supported eliminating the Defense Department’s longstanding ban on gay troops serving in the armed forces, but upon entering office in 1993, he encountered strong resistance among military leaders in the Joint Chiefs of Staff and their allies in Congress, particularly Sam Nunn, who was the chair of the Senate Armed Services Committee at the time. They argued that admitting openly gay service members into the military would undermine “unit cohesion” and threaten combat effectiveness. After six months of Senate hearings and negotiations, Clinton announced the “Don’t Ask, Don’t Tell” compromise, which was signed into law and remained official Defense Department policy until it was repealed under the Obama Administration in 2011.

Retired Gen. Merril McPeak of the United States Air Force, who served on the Joint Chiefs of Staff from 1990 to 1994 and has referred to himself as “the godfather of Don’t Ask, Don’t Tell,” says he still thinks DADT had a positive affect on the military. “Unit cohesion is not helped by sexual diversity,” he tells TIME.

“The main result was to remove the requirement for people to be liars in order for them to enter the armed forces.”

For many gay rights’ advocates, DADT represented only marginal progress or even a step back for the effort to fully integrate LGBTQ service members. They stood firm that gay troops did not undermine unit cohesion, and that those were opinions based on stereotypes rather than facts, pointing to a 1993 RAND Corporation report, shelved by military leaders during the 1993 hearings, which had concluded that sexual orientation of military personnel was “not germane” to military readiness.

According to Dixon Osburn, co-founder of the Servicemembers Legal Defense Network, there was little difference between the DADT policy and the previous ban.

For Osburn, the problems of DADT were both practical and symbolic. “If the federal government treats gays as second class citizens, then it gives permission for everybody else to treat us like second-class citizens as well.”

Keith Meinhold, who was discharged from the Navy for admitting his sexual orientation in 1992 and subsequently reinstated after successfully challenging his dismissal in court, saw little difference in life in the Navy for gay people between the two policies. “Anybody who ever served knows that [DADT is] a fresh coat of paint because the only people who were ever penalized for violations of DADT were people who told, often in very circumspect ways. No one who asked ever got punished.”

In his view, the policies under DADT continued the same culture of harassment of gay service members that had existed under the previous ban. “It didn’t change anything about the lives of people in the military. Investigative services were still going and looking at license plates at gay bars outside military bases, they were still hauling people in and questioning them,” he says. “Practically, for people serving in the military, nothing changed.”

In 1993, TIME Magazine reported on the Nunn committee’s tour of military bases highlighting a particularly striking visit to the Norfolk Naval Base, in which Senator Stom Thurmond lectured Lieutenant Tracy Thorne, a gay service member.

Looking back on DADT 25 years later, many see the battle over the policy as the opening salvo in a conflict of ideas that reshaped America over the course of the next two decades. “There was actually a national conversation for the very first time on gay Americans and what that meant,” says Osburn. “There was a vast sea change of opinion about this over a decade and a half, and a big part of that was keeping the dialogue going and presenting incredibly patriotic individuals who were serving openly.”

The change in American attitudes in the decades since 1993 is well documented. In 1994, the Pew Research Center reported 45% of Americans opposed allowing gays and lesbians to serve openly in the military. By 2010, that number was 27%.

For Meinhold, who retired from the Navy in 1996, the passage and subsequent reckoning over DADT was a necessary step in expanding gay rights in the United States. “If it wasn’t for the debate over gays in the military, we wouldn’t have gay marriage today. But one thing brings about another.”

For many, the initial debate over DADT in 1993 seems to have receded far into the past, especially following the law’s repeal seven years ago. On the day the policy was lifted, President Obama stated, “As of today, patriotic Americans in uniform will no longer have to lie about who they are in order to serve the country they love.” Around 70,000 gay men and women are now members of the American armed forces, and the blatant discrimination on display in the hearings in 1993 are evidence not merely of the ideas at the time, but also of just how much the nation has changed in 25 years.

But for many advocates, the past two years have pushed back the hard-fought gains they won after 1993. Following the Trump Administration’s attempts to block transgender people from serving in the military last year, an oddly familiar narrative has played out. In justification of Trump’s proposed ban, currently blocked by court order pending the outcome of a series of federal lawsuits, his administration released a document stating that transgender troops could “impair unit readiness,” “undermine unit cohesion,” and “lead to disproportionate costs” — arguments reminiscent of those cited decades ago by McPeak, Nunn and others in the debates over DADT.

Like in 1993, the RAND Corporation, a nonprofit think tank originally tasked with serving the U.S. armed forces, has released its own assessment, this time stating that allowing transgender service members would have “minimal impact on readiness and healthcare costs” — a contradiction to the claims made by the Trump Administration.

And, like in 1993, while the President and Congress work with the politics, thousands of would-be sailors, soldiers, airmen and women, and support personnel wait to see what will become of their futures in the armed forces.

“The saddest part of it is all the lives of thousands of Americans who only wanted to serve their country, which were ruined before this policy was eventually lifted,” says Meinhold of DADT. “It’s sobering to think about what people had to go through.” 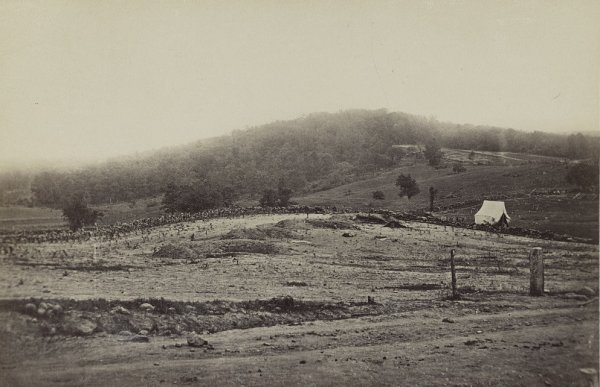 The Surprising Reason Why the Battle of Gettysburg Took Place Where It Did
Next Up: Editor's Pick