It was raining champagne on Sunday night for France‘s World Cup championship.

After winning the World Cup final over Croatia 4-2, France coach Didier Deschamps was busy fielding questions about the winning team at a post-championship press conference when the team got a little raucous. Players—including Antoine Griezmann, Paul Pogba and Kylian Mbappewere—stormed the press conference screaming Deshcamps’s name and showering him with champagne and some number of energy drinks.

“They are completely crazy, those lads,” said a grinning, wet Deschamps after the players had left. “They’re young and they’re happy.”

The players had already nailed their leader with champagne at Luzhniki stadium, but evidently those bubbles were not sufficient. Deschamps, who became the third person to win as both a player on the field and a coach on the bench, looked like he loved it.

“I had an immense privilege to live through this as a player 20 years ago and it was in France, so it will be marked in my memory forever, but what the players did together today is just as beautiful,” he said. “I have a son who is 22 years old. When we were world champions he was too young to understand and today there are young people who have this happiness to be able to live this event with us.”

France sailed through defeats of Uruguay, Argentina, Belgium and Croatia to finally kiss the golden trophy. They last won the Cup in 1998, so there was plenty to celebrate for the talented team. 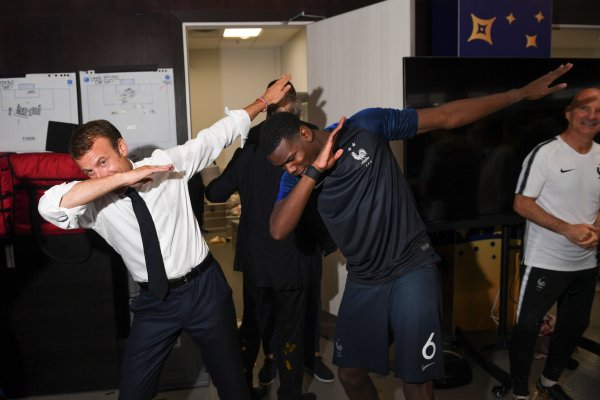