Report: Al Sharpton Was FBI Informant on the Mob

The Rev. Al Sharpton has served as an outspoken civil rights activist, presidential nominee, television host, and, if a new report is to be believed, a key informant to the FBI.

According to a lengthy report by website The Smoking Gun, Sharpton, 69, served as “Confidential Informant No. 7” in the 1980s, playing a prominent role collecting information on New York City’s most prolific mobsters. Sharpton has denied the claims.

In a Tuesday morning press conference, Sharpton said that he wasn’t an informant but rather he was merely cooperating with the FBI. “I’m not a rat, I’m a cat,” Sharpton reportedly said, according to journalists live-tweeting the event. He continued that the only thing he was ashamed of were “those old fat pictures” that have been shown in conjunction with the reports.

The Smoking Gun’s report — based on interviews, court records, and hundreds of pages of documents obtained as the result of requests invoking Freedom of Information Act — claims that Sharpton worked for a joint FBI/NYPD crime task force that was primarily pursuing the notorious Genovese crime family. Sharpton allegedly was sent out to talk to mobsters with a bugged briefcase. The website said that information he obtained led to the bugging of two Genovese family social clubs, three cars and a dozen phone lines approved by eight different federal judges.

During Tuesday’s press conference, he admitted with working with the FBI for two years and wearing a wire to record conversations. “The conversations were recorded, and I would record them today,” he said. “We are victims trying to stop something.”

In a previous interview, Sharpton told the New York Times, “Most of what I’ve looked through [on The Smoking Gun] does not remind me of anything I was involved in.” The site says that Sharpton denied its claims in an interview, particularly ones stating that he was “flipped” after a drug deal. “The claim is I helped get the mob, not that I was in the mob,” Sharpton said. “I was never told I was an informant.”

It has long been known that Sharpton worked with the FBI in the 1980s to assist in an investigation against boxing promoter Don King. He told the New York Daily News that he contacted authorities after Gambino family member Joseph Buonanno and others sent him death threats for trying to help African-Americans succeed on the business side of the music industry. “If you’re a victim of a threat, you’re not an informant — you’re a victim trying to protect yourself,” he said. “I encourage kids all the time to work with law enforcement, you’re acting like it’s a scandal for me to do that?” 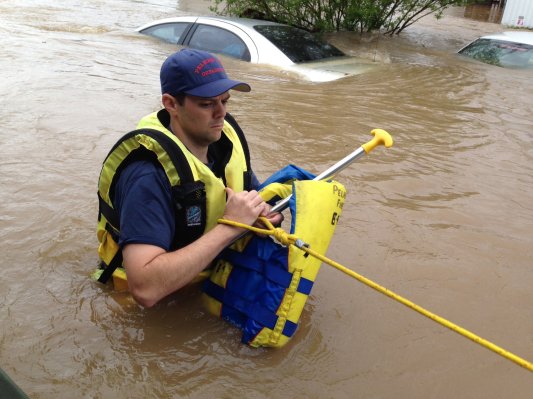 Storms Kill 2 in Southeast
Next Up: Editor's Pick