Arizona Sen. John McCain on Friday praised the Justice Department’s indictment of 12 Russian intelligence officers and called on President Donald Trump to cancel his upcoming summit with Russian President Vladimir Putin if he is “not prepared to hold Putin accountable.”

“These revelations add to a body of evidence confirming an extensive plot by Vladimir Putin’s government to attack the 2016 election, sow chaos and dissension among the American electorate, and undermine faith in our democracy,”McCain said in a statement on Friday. “And despite repeated warnings from our nation’s top intelligence and military leaders, the Kremlin’s efforts to weaken our institutions have continued unabated with insufficient action taken by the administration or Congress to strengthen our cyber defenses, safeguard our election systems, and deter further destabilizing activities.”

Trump is slated to meet with Putin in Helsinki on Monday.

“President Trump must be willing to confront Putin from a position of strength and demonstrate that there will be a serious price to pay for his ongoing aggression towards the United States and democracies around the world,” McCain said. “If President Trump is not prepared to hold Putin accountable, the summit in Helsinki should not move forward.”

Trump said Tuesday that his meeting with Putin “may be the easiest” out of all his other meetings with NATO leaders this week. And on Friday, he voiced skepticism that the meeting with Putin would result in a confession about election meddling.

“I don’t think you’ll have any ‘Gee, I did it, I did it, you got me,’” Trump said Friday morning before the indictments were announced. “There won’t be a Perry Mason here, I don’t think, but you never know what happens, right?” 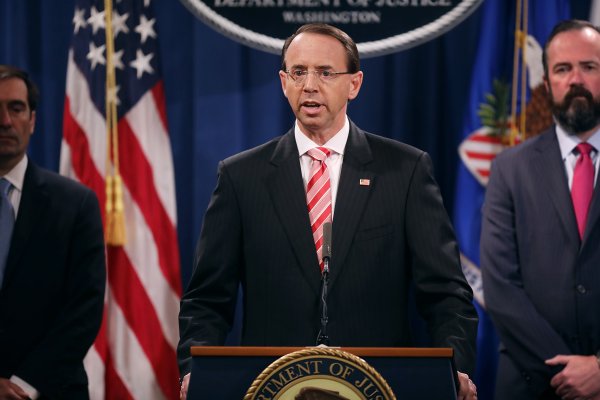