In light of the indictments Friday of a dozen Russian intelligence officers on charges of meddling in the 2016 election, there have been public calls for President Donald Trump to cancel his much-anticipated summit with his Russian counterpart, Vladimir Putin.

Several key senators, including Democratic Leader Chuck Schumer and Republican Sen. John McCain, asked for the meeting in Helsinki to be rescheduled.

Trump has decided to go through with it anyway, eager to discuss a wide-range of topics in hopes of resetting the conversation, including an opportunity for the two leaders to negotiate a deal around nuclear weapons reductions.

“So if we could do something to substantially reduce them — I mean, ideally, get rid of them. Maybe that’s a dream,” Trump added. “But certainly it’s a subject that I’ll be bringing up.”

The meeting presents Trump and Putin with an opportunity to revitalize efforts to develop, extend, or strengthen existing arms treaties designed to limit the spread of nuclear arms. It comes at a critical time when several Cold War-era arms control agreements between the two nations, which helped prevent inconceivable catastrophes and widespread proliferation for nearly a half-century, are set to expire or are on the cusp of falling apart.

While there are several nuclear arms issues where the U.S. and Russia remain at diplomatic impasse, there’s at least one that Trump and Putin could easily agree upon in Helsinki, arms control experts say: Extending the New Strategic Arms Reduction Treaty, or New START.

The treaty, a linchpin arms-control agreement, is set to expire on Feb. 5, 2021. However, if both presidents agree, deal can be extended by up to five years without further approval by the U.S. Senate or Russian Duma due to a clause that’s in the already-ratified treaty.

“If they’re going to take up arms control, this would be the easiest thing to do,” said Madelyn Creedon, who served as deputy administrator of the National Nuclear Security Administration during the Obama administration.

The 2010 deal limits each side to 1,550 deployed nuclear warheads and 700 deployed heavy bombers and ballistic missiles. It also includes a thorough monitoring and verification regime to help ensure compliance. If it sunsets, it will be the first time in the effort to limit the strategic stockpiles in the U.S. and Russia since 1972.

Putin has publicly supported extending New START and the White House recently directed an interagency review to explore whether to move forward with it — after Trump tweeted about stopping the arms race.

There are political headwinds, though, because the U.S. and Russia have accused one another of violating current arms control agreements. Members inside the Trump Administration and Congressional Republicans have said the U.S. shouldn’t be embarking on new deals without resolving the discrepancies.

“I think even the topic of arms control can be rather difficult to undertake,” Creedon told reporters in a call organized by the Arms Control Association, a Washington think tank. “Politically, it would still be very difficult to even have the discussion because of Russia’s continuing violation of the INF.”

The Intermediate-Range Nuclear Forces (INF) Treaty, a 30-year-old arms-control pact, is currently hanging by a thread. The 1987 agreement, which was the first and only nuclear arms control treaty that ever eliminated an entire class of nuclear weapons, forced the superpowers to scrap more than 2,600 missiles with ranges 310 to 3,420 miles — weapons considered destabilizing to the European continent because their capability to launch a nuclear strike from anywhere without early warning.

U.S. intelligence first recognized Moscow’s potential violation of the Intermediate-Range Nuclear Forces Treaty several years ago when the Russian missile was still in test phase. The Obama Administration worked unsuccessfully to persuade the Kremlin to stand down the program. (The Trump Administration has decided to respond with a missile of its own.) Russia has likewise accused the U.S. of violating the agreement because of the deployment of certain missile defense systems in Europe.

The U.S. and Russia have engaged diplomatic talks on this issue for years without making progress. This means the INF issue is unlikely to be resolved in Helsinki, because of the reluctance of either side to admit a violation, according to Daryl G. Kimball, executive director of the Arms Control Association. “The INF issue is technically complex,” he said. “I don’t think the leaders are going to be equipped to talk about the details.”

However, the Administration should not let the INF issue handcuff it on other nuclear-related topics, he said.

The prospect of not being able to restrain nuclear weapons, which can obliterate a major American city and the millions of people living within it, is a chilling notion that must never be realized, said Thomas M. Countryman, a 35-year career diplomat who retired last year after leading the State Department’s nonproliferation efforts. He hopes Trump and Putin can simply repeat a similar statement issued by President Ronald Reagan and Soviet Union leader Mikhail Gorbachev during the heights of the Cold War: A nuclear war cannot be won and must never be fought.

A declaration like that wouldn’t “require long technical complex discussions between the two presidents,” Countryman said. “It simply requires them to make very straightforward statements that would lead to progress between the two sides.”

The U.S. arsenal hit its peak in 1967 with a stockpile of more than 31,255 nuclear weapons. While the Soviet Union had amassed an equally devastating number of warheads, neither side believed their arsenal was superior in strength to survive a conflict.

During the Cold War, a series of treaties between the U.S. and the then-Soviet Union were designed to avoid miscalculation and keep communication channels open — even though Washington and Moscow were sworn adversaries. Many of those treaties (The Treaty on Conventional Armed Forces in Europe, Prevention of Incidents On and Over the High Seas, Agreement on the Prevention of Dangerous Military Activities) no longer exist.

In recent months, Trump and Putin have publicly touted the size and power of their respective nuclear arsenals. Indeed, as TIME documented in February, both nations are in the midst of overhauling their nuclear forces, including new ICBMs, ballistic-missile submarines and modernized heavy bombers.

“The United States and Russia possess more than 90% of the world’s nuclear weapons, each posing an existential threat to the other,” Former U.S. Secretary of Energy Ernest J. Moniz and former Georgia Sen. Sam Nunn recently wrote in an op-ed. “Outdated Cold War nuclear postures, new cyber dangers and the spread of nuclear knowledge and technology, make it imperative that our leaders work together to prevent a nuclear blunder, with the Helsinki summit being an essential step to restarting nuclear risk reduction efforts.”

Russia recently announced several new types of nuclear weapons. Meanwhile, the Trump Administration wants to add two new sea-launched weapons, one outfitted with a small atomic warhead for battlefield use. The new warhead, known as a tactical nuclear weapon, would be delivered by a submarine-launched missile against an advancing army.

“We’ve been modernizing and fixing and buying,” Trump said Friday in Britain. “And it’s just a devastating technology. And they, likewise, are doing a lot. And it’s a very, very bad policy. We have no choice. But we are massively big and they are very big. And I’ll be talking about nuclear proliferation. That would be a great thing if we can do.” 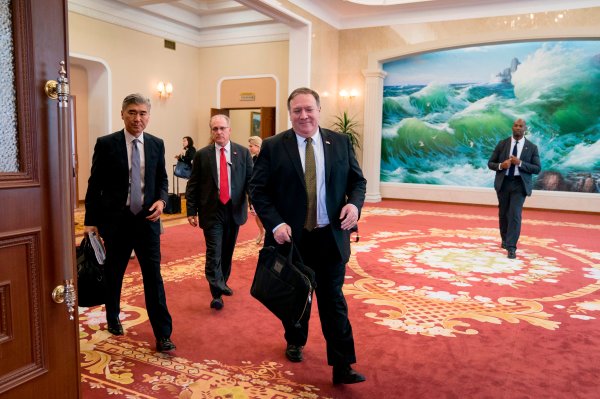