Lei Jun Wants to Be China’s Answer to Steve Jobs. But Trump’s Trade War Is Getting In His Way

From the time he was a small boy, Lei Jun strived to get close to technology. Computers obsessed his every waking hour. But in the rural China of the early 1980s, his teacher father’s monthly salary of $7 put a $2,000 Apple II far out of reach. So Lei devised elaborate ways to fiddle with anything high-tech.

He would wait for hours outside his school’s tiny computer lab, hoping to sneak in when a classmate missed his allotted turn. He took odd programing jobs–once working 72 hours straight without sleep–just to use a client’s PC. “I even drew a keyboard on a sheet of paper and spent classes secretly practicing typing, so I could use my time at the computer more efficiently,” Lei says.

Proximity to tech is no longer a problem for Lei, founder and CEO of Xiaomi. His office in the mammoth company’s Beijing headquarters is stacked with smartphones, televisions, fitness trackers, voice-command speakers and air purifiers produced by the technology firm he founded in 2010. Xiaomi’s sleek designs have earned it the nickname the Apple of the East, though its business strategy differs sharply from the Cupertino approach: Xiaomi limits its profit margins on hardware, luring customers with high-spec smartphones that cost a fraction of an Apple or a Samsung equivalent. It then targets profits from additional services like apps, streaming movies and music and gaming.

On July 9, Xiaomi listed on the Hong Kong stock exchange, raising $4.7 billion and valuing the firm at $54 billion, an impressive feat after only eight years in operation. Yet the listing was a fraction of the earlier market estimate of $100 billion, which stood to make Lei one of China’s richest men. There are multiple reasons for the lackluster showing, including the question of whether Xiaomi should be judged on its principal smartphone business or its ambitions for expanding online services.

But to Lei, external factors appeared to loom largest–especially U.S. President Donald Trump’s escalating trade war with China, of which Xiaomi is the most visible victim yet. Standing on a red-carpeted podium at the Hong Kong stock exchange, Lei bemoaned “this trade war between China and the U.S.” and “turmoil in global capital markets.”

Trump has accused China of unfair trade practices that account for a $375 billion trade deficit. On July 6, the U.S. imposed 25% tariffs on $34 billion of Chinese goods. Beijing responded dollar-for-dollar on over 500 U.S. products. On July 10, Washington announced 10% tariffs on a further $200 billion of Chinese products. In response, Beijing vowed “necessary countermeasures” to the “totally unacceptable” hike. “The dominant problem for Xiaomi is this broader trade war backdrop that leaves it vulnerable, should things really escalate,” says Chris Beauchamp, a senior market analyst for IG Group.

Even when TIME met Lei in May, the potential impact weighed on his mind. “We are paying very close attention to what’s going on between the two countries,” he said. “In today’s globalized world, the U.S. and China must have a close working relationship.”

Like many tech entrepreneurs, Lei admits to drawing inspiration from Steve Jobs’ founding of Apple in 1976. Xiaomi has hundreds of Mi stores where the influence is unmistakable, even down to appliances’ uniform matte-white casing. Lei began introducing new products wearing Jobs’ signature black tee and stonewashed jeans, inviting mockery from some corners of the tech world. The Apple founder’s favorite “One more thing” phrase has even flashed behind Lei onstage. “Steve Jobs had a huge impact on me,” says Lei. “He inspired me to build a company that impacts the world.”

He’s already on his way. Xiaomi pioneered full-screen smartphones and owns more than 6,000 patents–53% of them outside of China. The company is the world’s largest purveyor of the Internet of Things, linking appliances together to create smart homes. Today it boasts 100 million connected devices worldwide.

But only a tiny fraction of those can be found in the U.S. as the spat between the world’s two biggest economies heats up. Chinese investment in the U.S. in 2017 fell by more than 90%, compared with the year before, in large part due to Washington’s blocking deals that could weaken America’s strategic advantage. Tech is the biggest target: on June 27, Trump backed new legislation “to combat the predatory investment practices that threaten our critical technology leadership.”

Both these efforts plus the new tariffs target Made in China 2025, Beijing’s strategic gambit to upgrade Chinese manufacturing from cheap and cheerful to innovative and high-tech. Beijing is providing more than $3 billion in central and local grants, making overseas acquisitions and pushing public-private cooperation in 10 key sectors, including passenger jets, robotics, electric vehicles and semiconductor chips, crucial for smartphone makers like Xiaomi. According to Lorand Laskai, a research fellow at the Council on Foreign Relations, the goal is not to join the ranks of high-tech economies like the U.S. and Japan “as much as replace them altogether.” An alarmed Washington has started wielding national security as a cudgel to counter the gambit. U.S. intelligence agencies have warned Americans against buying Chinese phones, and pressured U.S. carriers not to sell them, saying Beijing might use back doors in the tech to access private data. The suggestion makes Lei bristle. “It’s just too ludicrous,” he says. “It’s like something out of a movie.”

The ramifications for companies like Lei’s are potentially huge. In April, the Trump Administration blocked U.S. firm Qualcomm from selling processor chips to Chinese smartphone maker ZTE, which had flouted sanctions against Iran and North Korea. The company nearly went bust, until Chinese President Xi Jinping intervened with Trump and negotiated a reprieve.

It was a clear warning. And as a result, China has begun to take action. As the U.S. attempts to close off Chinese access to key technology, Beijing is funding attempts to create its own vertical supply chains. Thanks to an undisclosed government grant, Xiaomi–another Qualcomm customer–has begun manufacturing its own chips, freeing it from dependence on outsiders. Targeting Chinese tech may “give short-term advantage to the U.S.,” says Clay Shirky, author of Little Rice: Smartphones, Xiaomi, and the Chinese Dream, “but it gives long-term advantage to China.”

Beyond the geopolitics, American consumers are missing out. Xiaomi is now present in more than 70 countries. Its smartphones are the fourth most popular ones in China–where there is fierce domestic competition–but are No. 1 in populous India. More than 190 million people use a Xiaomi device every month. Yet despite the billionaire backers quaffing champagne at the Hong Kong IPO, the company’s name remains virtually unknown in the U.S.–a major obstacle to Lei’s stated ambition to create a Jobsian company that impacts the world. “We’re confident American customers would also be crazy for our products,” he says. But only, it seems, if the U.S. and China can find a way resolve a trade war that’s just getting started.

With reporting by Casey Quackenbush/Hong Kong 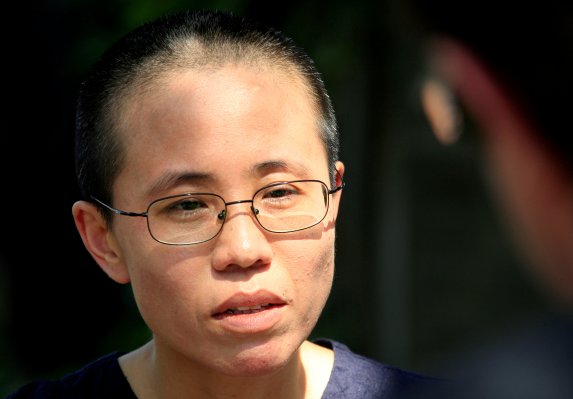 Widow of Nobel Laureate Freed From House Arrest in China
Next Up: Editor's Pick