In anticipation of the massive protests planned for President Donald Trump’s visit to the U.K. on Thursday, the U.S. Embassy has warned Americans to “keep a low profile” in the English capital.

In the Tuesday memo, the U.S. Embassy in London alerted citizens to the “numerous demonstrations” that could “attract large crowds” that may be less than agreeable toward Americans.

In a list of “actions to take,” the warning recommended that Americans, “Exercise caution if unexpectedly in the vicinity of large gatherings that may become violent,” “keep a low profile” and “be aware of your surroundings.”

Up to 200,000 people are expected to take to the streets in protests planned to run Thursday through Sunday, mostly in central London. Demonstrators plan to fly a 19-foot blimp depicting Trump as an orange diaper-wearing baby — a move London Mayor Sadiq Khan told the BBC he approved of as a “right to peaceful protest.”

President Trump will arrive in Britain on Thursday after the NATO summit in Belgium. During his visit, he will meet Queen Elizabeth, U.K. Prime Minister Theresa May, and also probably play golf at one of his courses in Scotland.

Trump’s visit has prompted the largest U.K. police mobilization since large-scale riots in 2011, the Guardian reports.

The last time President Trump was invited to the U.K., more than 1.8 million Britons signed a petition against the visit. Prime Minister May had invited the president in January for the opening of the new U.S. Embassy in London, but Trump canceled the trip because he did not like the Obama administration’s choice of location for the new facility. 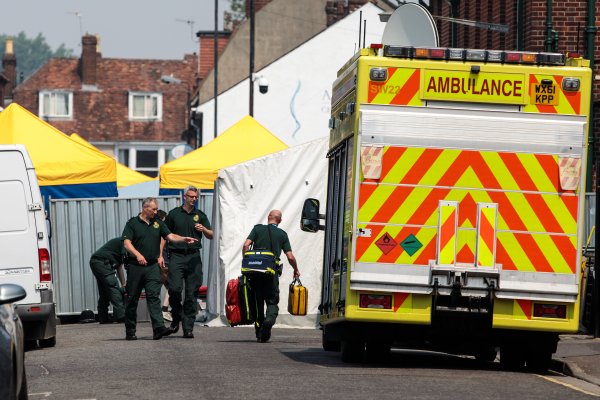 Novichok Could Remain Active for 50 Years, U.K. Police Say
Next Up: Editor's Pick