United Nations of Nuwaubians founder, Dr. 'Dwight' Malachi Z. York (cq), center, participates in the 'Procession of Osiris' at the farm in Putnam County near Eatonton during the Founders Day Festival on June 26, 1998.
W. A. Bridges Jr./Atlanta Journal-Constitution—AP
By Christine Pelisek / People

Niki Lopez once had a disturbing nightmare, and it still haunts her.

In the dream, she is panicking about finding the perfect outfit for her young son to wear before she introduces him to Dwight “Malachi” York — the cult leader who repeatedly sexually abused her decades before when she was a child.

“When kids visited him they were in their best outfits,” Lopez, now 43, tells PEOPLE about the leader of the United Nuwaubian Nation of Moors, a black supremacist cult she finally escaped in 2000 at the age of 25.

The cult is featured in next Monday’s episode of People Magazine Investigates: Cults, airing July 9 (9 p.m. ET) on Investigation Discovery.

Nightmares plague Lopez when she’s awake, too. A passing glance from a stranger can still throw her off. “There was this guy that had similar complexion and features as York. I think it was his nose that reminded me of him. I just clenched up. It’s still a struggle.”

Like so many of York’s former child sex slave victims, Lopez’s childhood was a living nightmare of slavery, starvation and sexual abuse. Four years after her escape from the cult, she testified against York in a trial that would result in his being sentenced to 135 years in federal prison for transporting minors across state lines for sexual purposes. He remains jailed at 73.

Lopez says she is sharing her story in the hopes it will encourage other survivors to speak out.

As far as Lopez can remember, her life revolved around York, an ex-con who in the 60’s founded his own Muslim sect that preached black supremacist ideas and Islamic mysticism. Lopez’s mother, who was drawn to York’s teachings, moved Lopez and her two siblings to York’s Brooklyn compound in 1986.

About two years later, Lopez was groomed and then abused.

Tracey Bowen, a lieutenant in the Putnam County Sheriff’s Office, tells PEOPLE, “He would allow the children to watch cartoons and feed them ice cream,” adding, “It was a progression, a complete grooming process he did with these kids.”

Soon, Lopez says, she was forced to make sex videos with other children and taught how to perform oral sex by one of York’s wives. One night, Lopez says she was asked to stay behind at York’s house, where he held her down and raped her.

In 1993, York moved his followers to Eatonton, Georgia where he built a compound with two 40-foot plywood and stucco pyramids and a Sphinx on a former 476-acre game reserve he called Tama-Re. At first, York called himself Chief Black Thunderbird Eagle and claimed to be the modern day leader of a lost Native American tribe that fought early European colonization. He then identified himself as the leader of the United Nuwaubian Nation of Moors and claimed to be an Egyptian god and an extraterrestrial from the planet Rizq.

In 2001, York’s sexual violence reached local, state and federal authorities when former followers, including Lopez, came forward about his years of sexual abuse. Law enforcement raided York’s compound in May of 2002.

“Hanging on hooks in the hot tub area were little white dresses for little girls,” says Eatonton attorney Frank Ford, who represented the county amidst a legal fracas with York. “I immediately thought wedding dresses to be initiated.”

Lopez was among those who later testified against York in federal court in 2004.

“I felt empowered,” she says of her testimony against York. “I lived my whole life being told what to do by this person and he governed everything that I did.”

Today, Lopez is a visual artist and graphic designer in Fort Lauderdale, Florida. She spends much of her time volunteering her skill as an artist to causes such as feeding the homeless and LGBTQ issues.

She is also at the forefront of a movement called “What’s Your Elephant,” which uses the arts to talk about uncomfortable “elephant in the room” topics.

“My elephant is sharing about being a sexual abuse survivor,” she says. 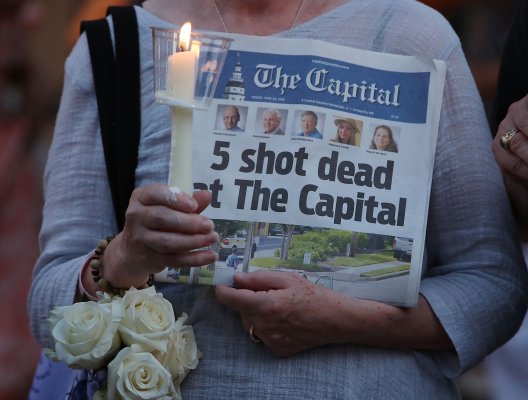 Capital Gazette Staff Will March in the Annapolis Fourth of July Parade This Year, Instead of Covering It
Next Up: Editor's Pick