President Donald Trump announced Monday evening that he had selected Judge Brett Kavanaugh to replace Anthony Kennedy on the Supreme Court, his second choice in less than two years.

“Judge Kavanaugh has devoted his life to public service,” Trump said in a televised address from the east room of the White House. “There is no one in America qualified for this position and more deserving.”

The 53-year-old Kavanaugh, who clerked for Kennedy and who currently sits on the U.S. court of appeals for the D.C. Circuit Court, emphasized in his remarks accepting the nomination the importance of judicial independence. He also stressed that the constitution must be interpreted “as written – informed by history and tradition and precedent.”

President Trump nominates Judge Brett Kavanaugh to the Supreme Court during an event in the East Room of the White House in Washington on July 9, 2018.
Gabriella Demczuk for TIME

Kavanaugh was confirmed to the D.C. Circuit Court in 2006, after working as an associate counsel in the Bush administration. Bush nominated him in 2003, but his hearings were delayed by three years because of partisan fights in the Senate. From 2003 to 2006, he served as Bush’s staff secretary.

Now, 15 years later, he now faces another confirmation battle in the Senate. This time, he will be guided by former Arizona Senator Jon Kyl, who served on the Senate Judiciary Committee for 4 of the last 5 Supreme Court confirmations.

But there is little room for any intra-party debate; the margin for Republican defections is slim to none. Republicans currently have a 51-49 majority — one more then they need to confirm the nominee — but it is unlikely that Sen. John McCain, who has been absent from the floor while he battles brain cancer, will return for a vote. That means that, if Senate Minority Leader Chuck Schumer is able to hold the Democrats together for a unified opposition vote, Republicans will need every member of their caucus to vote for the nominee — which isn’t necessarily a guarantee.

Prior to Trump’s announcement, Republicans Sens. Lisa Murkowski of Alaska and Susan Collins of Maine were widely identified as the two lawmakers most likely to break with their party, given both their support of abortion rights, and the view that Kennedy’s replacement had potential to be more conservative than he was in this regard.

Collins has said she would not back a nominee who seeks to overturn Roe v. Wade, the 1973 court case that legalized abortion. “I want a nominee who would respect precedent, a fundamental tenet of our judicial system,” she told CNN’s Jake Tapper on July 1. “I would not support a nominee who demonstrated hostility to Roe v. Wade because that would mean to me that their judicial philosophy did not include a respect for established decisions, established law.”

On Monday, anticipating Trump’s announcement, Schumer said on the Senate floor that the nominee’s appreciation of precedent as settled law would not be sufficient, and that they should be questioned about Roe specifically. “At this critical juncture, with so many rights and liberties at stake, US Senators and the American people should expect an affirmative statement of support for the personal liberties of all Americans from the next Supreme Court nominee.”

Kavanaugh has not publicly released his stance on Roe. But Senate Democrats are likely to pounce on his 2017 decision in the case Garza v. Hargan; the government had mandated that an undocumented teenage immigrant could leave her detention center to have an abortion, but Kavanaugh vacated the order, and the abortion was postponed for another week and a half. The court ultimately ruled the teenager could have the abortion, an opinion from which Kavanaugh dissented.

After Trump announced Kavanaugh, Schumer said in a statement that he would oppose his nomination with “everything I have.” “I hope a bipartisan majority will do the same,” he said. “The stakes are simply too high for anything less.”

Its probably unlikely, however, that Schumer will get his wish. Both Collins and Murkowski voted for Kavanaugh in 2006, arguably making it harder for them to oppose him this time around. And even if they do, there is always the possibility that electoral politics prevent the Democrats from remaining unified. Some, like Democratic Sen. Bob Casey, have already decided to oppose the nomination. But all eyes are on the Senate Democrats who voted for Neil Gorsuch last year — North Dakota’s Heidi Heitkamp, Indiana’s Joe Donnelly, and West Virginia’s Joe Manchin — who are facing reelection this year in states where Trump won by double digits in 2016.

Now, with their elections just around the corner, these three, as well as others facing a similar predicament, like Florida Senator Bill Nelson and Montanta Senator Jon Tester, may be under more pressure than usual to buck party leadership and back the nominee to save their careers.

With reporting by Abigail Simon. 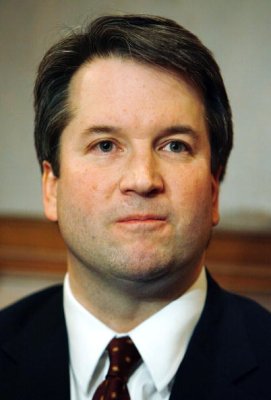 President Trump Picked Brett Kavanaugh for the Supreme Court. Who Is He?
Next Up: Editor's Pick