I'm a British Lawmaker. Here's Why I’m Protesting Trump’s Visit to the U.K.

Ideas
By David Lammy
Lammy is a lawmaker for Britain's Labour party and parliamentary representative for Tottenham in North London.

On Friday, a 19-foot “Trump Baby” balloon is set to float over the Houses of Parliament in London, as President Donald Trump makes his first official visit to the United Kingdom. I will be one of tens of thousands on the streets, protesting against our government’s capitulation to this tyrant in a toupee. Usually we do not welcome presidents of the United States in this manner, but this is no normal president. As in much of the rest of the world, Donald Trump is incredibly unpopular in the United Kingdom. According to Pew Research, 89% of Brits see Trump as arrogant and three quarters have no confidence in him to do the right thing in world affairs.

You can’t blame us. Donald Trump has insulted and slandered our capital at its most vulnerable moments. As a representative for some of the most deprived parts of London, I find his description of of my city as a “war zone” because of knife crime not just insulting, but ludicrous—coming from a president whose country has witnessed more than 7,000 lives lost to gun violence this year alone. When tragedies do occur on Britain’s streets, the president licks his lips at the political opportunity. Last summer, a van filled with knife-wielding terrorists rammed into crowds on London Bridge, murdering eight people and leaving 48 more injured. Foreign leaders from Brussels to New Delhi shared compassion and support for those hurt, while condemning the killers. Donald Trump’s immediate response? To slam the reassuring words of London’s first Muslim Mayor, Sadiq Khan.

Since then, Trump has barely concealed his racist attacks on the U.K . In November, he shared a post by fascist hate group Britain First from his official Twitter account. With this, he debased the memory of my parliamentary colleague, Jo Cox, who was shot and killed in the days leading up to Britain’s referendum on membership of the European Union, by a murderer who screamed “Britain First” as he committed the violent act. Britain First is an organization whose extreme views can best be compared to the KKK.

But then we already know Donald Trump has shown sympathy for white supremacists. We will neither forgive nor forget his equating of neo-Nazis with their opponents at the marches in Charlottesville, Va., last August. In Britain, we are proud people, and much of our national identity is still built upon our defeat of fascism in Europe during the Second World War. We recognize the United States’ vital support at this critical moment, as well in the economic reconstruction of our continent that followed. And so today, to see parts of the U.S. descend into state-condoned racism is to witness an old friend’s soul as it disintegrates.

It does not need to be said that our two countries remain deeply intertwined: in culture, in business, in art, and in life. My own career in law and politics owes so much to the U.S., which gave me the honor of becoming the first black Briton to study at Harvard Law School. The land of the free has overwhelmingly been a force for progress around the world. When Martin Luther King Jr. spoke of his dreams for emancipation in the 1950s and 1960s, he empowered black people far beyond America’s 50 states. When John F. Kennedy’s cool head prevented nuclear armageddon over 50 years ago, the whole world breathed a sigh of relief. And when Barack Obama gave America hope so recently, many of us in the U.K. said “yes, we can,” as well.

Britain and America share common values that have formed the basis for the liberal, democratic world order. Through international institutions, we have made the planet safer. Through trade and technological advancement, we’ve made the human species richer. But I do not march in spite of these shared achievements, I march because of them. The president’s threats to NATO and the U.N. are no more logical than arson. His trade wars with the E.U. and China could trigger the next great economic crisis of our times. Trump is not only a woman-hating, neo-Nazi-sympathizing sociopath. He is also a profound threat to the international order that has been the foundation of Western progress for so long. It is because I cherish and champion those values that this Friday, I will march with London against Donald Trump. 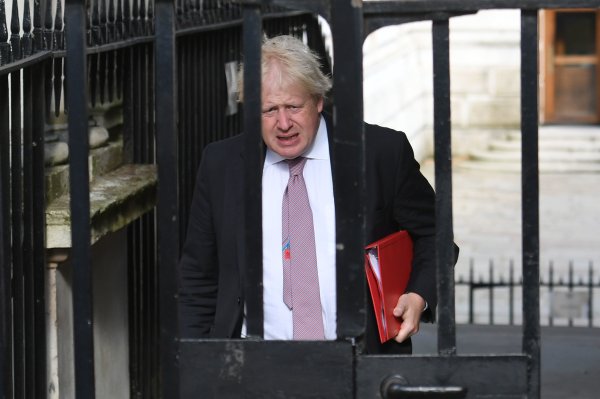 Boris Johnson's Resignation Over Brexit Could Lead to Major Shakeups in British Politics. Here's What to Know
Next Up: Editor's Pick