One Year on From His Death, Taiwan Remembers Nobel Laureate Liu Xiaobo

One year on from his death as a political prisoner, a sculpture dedicated to the late Chinese human rights activist Liu Xiaobo was unveiled Friday in Taipei.

The commemoration marks the one year anniversary of Liu’s death and has been spearheaded by his former protégé, exiled democracy activist and dissident Wu’er Kaixi, with backing from the international press freedom organization Reporters Without Borders (RSF). The sculpture was unveiled to a small crowd of the general public and the media under the gaze of the emerald Taipei 101 tower, and in front of Taipei City Hall.

“Liu Xiaobo was my mentor, and he is considered one of the most important icons for democracy in China,” Wu’er told TIME. “He is a clear reminder to the world of unfinished business. Taiwanese people joining us in erecting this sculpture are telling China that we have not forgotten our values.”

Entitled “I Have No Enemies,” the sculpture was illuminated in blue and green as dusk fell on the city. A string quartet rose above the nearby hum of traffic with observers coming to take photographs and pay their respects. James Huang, 59, brought his teenage daughter along to the event. He told TIME that he wanted her to see the atmosphere. “For this kind of issue, Taiwan cannot be excluded and everyone should care, regardless of who you are,” he said.

'I Have No Enemies,' a three-part sculpture dedicated to the late Chinese Nobel Peace Prize Laureate Liu Xiaobo, is unveiled in Taipei, Taiwan on the one year anniversary of his death on Jul. 13 2018
Wen-Yee Lee—TIME

A renowned literary critic, writer and activist, Liu was awarded the Nobel Peace Prize in 2010, but was unable to attend in person to receive his award due to his detention in China. He rose to prominence for his leading role in the 1989 student uprisings at Tiananmen Square, and later co-authored a call for China to embrace democracy in 2008, which would lead to his imprisonment on grounds of “inciting subversion against state power.”

“Liu Xiaobo’s legacy and the vision that he and others set forth in Charter 08 remain unfulfilled for millions of Chinese citizens,” said Florida Senator Marco Rubio, referring to the manifesto Liu helped write in 2008. The U.S. Senator chairs the bipartisan Congressional-Executive Commission on China. Despite a diagnosis of late-stage liver cancer and calls from around the world to release him for urgent medical treatment, Liu died at the age of 61 while still imprisoned on July 13, 2017.

Liu’s legacy has been immortalized in similar artworks and projects around the world, from illustrations that went viral at the time of his death to memorial events in major cities such as Hong Kong, Toronto and Berlin. Taipei’s offering consists of three elements: a book inscribed with his writing; a rose as a symbol of perseverance and passion; and an empty chair, a symbol associated with the 2010 Nobel Peace Prize Ceremony that Liu was unable to attend. “Instead they placed an empty chair in that venue to reflect the ridiculous reality,” says Aihua Cheng, the sculptor commissioned for the piece. “The empty chair here in Taipei allows admirers to quietly sit down and communicate with Liu Xiaobo silently, creating a sort of ‘free forum.'”

Liu Xia, widow of Liu Xiaobo, was released from house arrest on Tuesday following high-level diplomatic negotiations with Germany and international calls for her freedom. She had never been formally charged with a crime, and had spent eight years under tightly monitored state surveillance.

An accomplished poet and artist, Liu Xia joins several other fellow friends and Chinese intellectuals in exile in Berlin. Merely a day after her release, China sentenced veteran pro-democracy campaigner Qin Yongmin to 13 years in prison, again on vague charges of “subversion against state power.” In a statement timed to Friday’s anniversary, Senator Rubio called Qin’s imprisonment “a fresh reminder that the Chinese government and Communist Party are merciless in crushing political dissent.”

Memorializing events and dissidents like the Tiananmen Square uprising and Liu Xiaobo remains important in Taiwanese civil society, despite past reprimands from Beijing. The island transitioned to its own democratic political system in the 1980s and is considered by Beijing to be a renegade province. Relations have been fraught across the strait since President Tsai Ing-wen’s election in 2016, as her Democratic Progressive Party has not acknowledged the 1992 Consensus, which outlines the existence of “one China, different interpretations.”

“Liu Xiaobo was hoping for a China that would integrate the rule of law, freedom of expression, freedom of information and news that would help the Chinese citizen decide who to vote for,” Cedric Alviani, East Asia Bureau Chief of RSF, tells TIME. “Providing this memorial to Liu supports these freedoms — and these are the core values of Taiwanese society.”

— With reporting from Wen-Yee Lee in Taipei 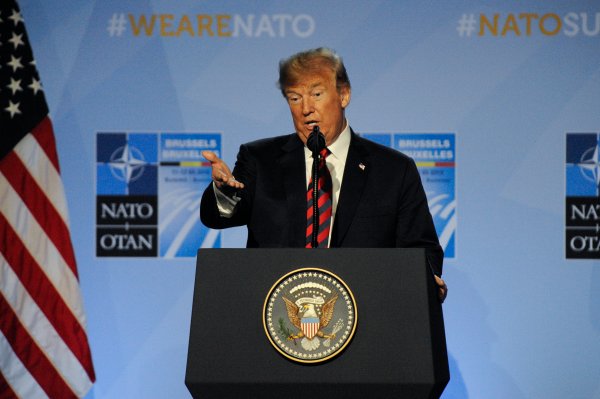 Trump Shakes Up NATO, but Eastern Europe Isn't Stirred
Next Up: Editor's Pick