'I Love You Mom, I Love You Dad.' Trapped Thai Soccer Team Sends Handwritten Notes From the Cave

Handwritten messages from the 12 boys and their soccer coach trapped in a cave in northern Thailand for almost two weeks have made the long journey from their cavern confines to the world waiting anxiously for them outside.

“The kids said ‘don’t worry,’ everyone is strong, they have a long list of food they want to eat when they get outside,” a Thai Navy SEAL wrote on the first of a small collection of mud-stained papers delivered by a diver. “They ask that their teachers won’t give them much homework when they come back.”

Thai Navy SEALs leading the monumental effort to free the trapped soccer team shared photos of the notes, penned late Friday, the following morning. Each of the boys aged 11 to 16 and their 25-year-old coach wrote a personal message assuring their families that they are in good spirits.

“I love you mom, I love you dad, and my brother too,” wrote Nick, 15, signing off with a hastily drawn heart. “When I get out, I want to go have a pork barbecue.”

“Don’t worry, I just disappeared for two weeks,” wrote his friend Bew, 14. “I’ll help you with your shop everyday, I will hurry out of here.”

Thai authorities are scrambling to come up with a plan to extract the team, known as the Wild Boars, from the water-logged cave system before monsoon rains resume. The group entered the Tham Luang cave on June 23 for what was meant to be a half-day trek, but were trapped inside by rising floodwaters.

More than 1,000 people joined a search and rescue effort that has gripped the nation and captivated the wider world. After nine long days of tireless efforts by the Royal Thai Navy, aided by at least seven foreign governments, they were discovered on a dry ledge several miles inside the cavern by a pair of British divers.

But getting them out has presented a whole new dilemma. With fresh rains expected any day and oxygen levels dropping inside the chamber, authorities are rushing for a solution; they will either have to dive out with experienced escorts, be pulled out from widened chimneys in the mountain above, or wait — possibly months — for water levels to recede.

If efforts to find a suitable chimney don’t pay off soon and if weather conditions worsen, authorities may opt for the dive — a dangerous journey through dark and difficult tunnels that even expert divers find arduous. On Friday, a former Thai SEAL volunteering on the mission lost his life while depositing oxygen tanks along the route. 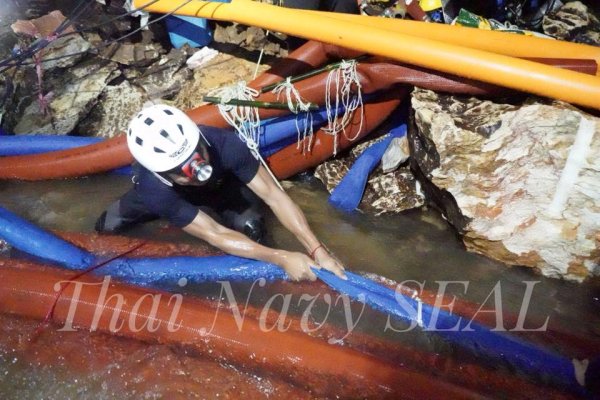